Molecular Detection of Trypanosoma spp. in Questing and Feeding Ticks (Ixodidae) Collected from an Endemic Region of South-West Australia
Previous Article in Journal

Shared Odds of Borrelia and Rabies Virus Exposure in Serbia

Lyme borreliosis (LB) is the most common tick-borne disease in Serbia and other European countries. Rabies is a fatal zoonosis distributed worldwide and is caused by the rabies virus. Professionals at risk of rabies—including veterinarians, hunters, communal service workers, and forestry workers—overlap with some professions at a higher risk of exposure to tick bites and tick-borne pathogen infections. We hypothesized that individuals identified by the public health system as at risk of rabies virus infection, and consequently vaccinated against rabies virus, also share a higher likelihood of Borrelia exposure. To test our hypothesis, a case-control study was carried out during 2019 in Serbia to determine the seroprevalence of anti-Borrelia antibodies in two case groups (individuals at risk and vaccinated against rabies virus) and a control group (individuals without risk of rabies). Individuals vaccinated against rabies following either “pre-exposure protocol” (PrEP, n = 58) or “post-exposure protocol” (PEP, n = 42) were considered as rabies risk groups and healthy blood donors (n = 30) as the control group. The results showed higher Borrelia seroprevalence in PrEP (17.2%; 10/58) and PEP (19.0%; 8/42) groups compared with the control group (6.67%; 2/30). Furthermore, odds ratio (OR) analysis showed that risk of rabies (in either the PrEP (OR = 2.91) or PEP (OR = 3.29) groups) is associated with increased odds of being seropositive to Borrelia. However, the difference in Borrelia seroprevalence between groups was not statistically significant (Chi-square (χ²) test p > 0.05). The shared odds of LB and rabies exposure found in this study suggest that, in countries where both diseases occur, the common citizen can be at risk of both diseases when in a risky habitat. These findings are important to guide physicians in targeting high-risk groups, and diagnose LB, and to guide decision-makers in targeting control and prevention measures for both infections in risk areas. View Full-Text
Keywords: rabies; Borrelia; seroprevalence; exposure; relative odds rabies; Borrelia; seroprevalence; exposure; relative odds
►▼ Show Figures 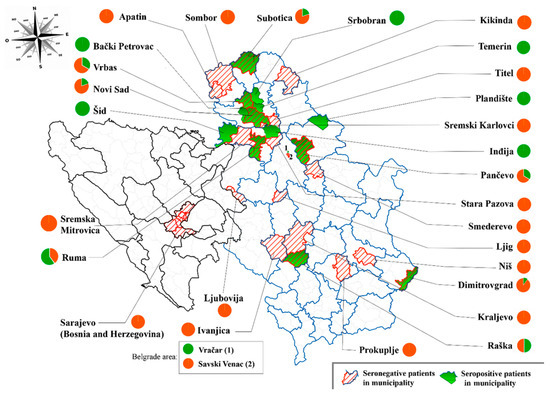