An Adaptive Machine Learning Methodology Applied to Neuromarketing Analysis: Prediction of Consumer Behaviour Regarding the Key Elements of the Packaging Design of an Educational Toy

Just a Matter of Time? Women’s Career Advancement in Neo-Liberal Academia. An Analysis of Recruitment Trends in Italian Universities

Recently, the Italian higher education system has experienced two profound changes: the strong feminization of its academic staff and the implementation of market-based reforms aimed at fostering cost efficiency and economic productivity. Such reforms include the reshaping of the academic career ladder envisaged by the last university reform, the so called Gelmini reform (law 240/2010), and the adoption of a performance-based funding system. Both elements occurred in parallel with a strong cut in turnover. By accessing unique data on recruitment covering the last two decades, which were provided by the Italian Ministry of Education, University, and Research’s statistical office, this study aims at investigating these changes from a gendered perspective. More specifically, it firstly aims at analyzing if the feminization of the academic staff is due to an effective improvement of gender equality in recruitment or, rather, to demographic dynamics; secondly, it investigates to what extent the recent neo-liberal transformations, and more specifically the reshaping of the career structure combined with the limitations on hiring, has had any implications in terms of women’s recruitment and advancement. The results suggest that the road to gender equality is extremely slow and non-linear. The introduction, with the Gelmini reform, of the new fixed-term assistant professor has tightened female access to the tenure track. Moreover, female recruitment remained substantially unchanged over the period among associate and full professors, thus suggesting that the feminization of the academic staff is not due to an effective improvement of gender equality in recruitment, but also to demographic dynamics, such as the retirement of men who are concentrated in the older cohorts. View Full-Text
Keywords: Neoliberal University; Italy; academic careers; recruitment; gender inequalities Neoliberal University; Italy; academic careers; recruitment; gender inequalities
►▼ Show Figures 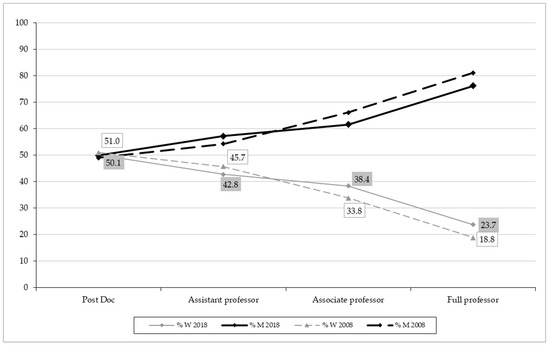