Group Asylum, Sovereignty, and the Ethics of Care

Sick Enough? Mental Illness and Service Eligibility for Homeless Individuals at the Border

This paper measures mental illness among individuals experiencing homelessness in a border city and compares it to the general housed population. We use original data from a homeless survey conducted in El Paso, Texas. Respondents self-reported any possible mental illness or related symptoms. We find that mental illness is not disproportionally common among the homeless, yet this is something that is often claimed by laypersons, some social service workers, and some researchers that limit sampling to institutionalized settings where formal mental illness is often among the prerequisites for admission. We find that “severe mental illness” among homeless persons is 6.2% (only around 2–3% higher than the general population), and “any mental illness” is 20.8% (only 1–3% higher than in the general population). Our results are consistent with other research focusing on street samples. View Full-Text
Keywords: homelessness; mental health; point in time; diagnosis homelessness; mental health; point in time; diagnosis
►▼ Show Figures 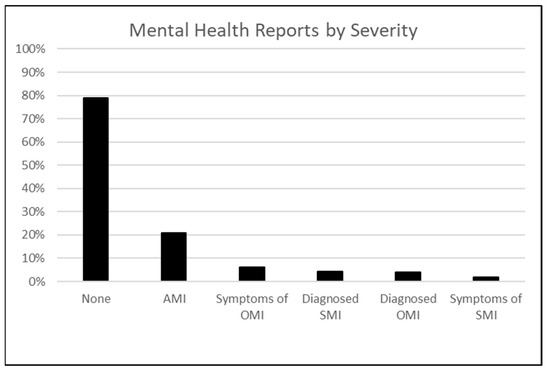