Impact of Trump’s Digital Rhetoric on the US Elections: A View from Worldwide Far-Right Populism
Previous Article in Journal

Too Much of a Good Thing: Social Capital and Academic Stress in South Korea
Previous Article in Special Issue

In this paper, we sought to model and characterize hate speech against immigrants on Twitter in Spain around the appearance of the far-right party Vox. More than 240,000 tweets that included the term ‘Vox’ between November 2018 and April 2019 were automatically collected and analyzed. Only 1% of the sample included hate speech expressions. Within this subsample of 1977 messages, we found offenses (56%), incitements to hate (42%), and violent speech (2%). The most frequent terms used were classified into five categories: Spain, Immigration, Government, Islam, and Insults. The most common features were foul language, false or doubtful information, irony, distasteful expressions, humiliation or contempt, physical or psychological threats, and incitement to violence. Using unsupervised topic modeling, we found that the four underlying topics (control of illegal immigration, economic assistance for immigrants, consequences of illegal immigration, and Spain as an arrival point for African immigrants and Islamist terrorism) were similar to those in the discourse of Vox. We conclude that the hate speech against immigrants produced around Vox, and not necessarily by Vox, followed the general patterns of this type of speech detected in previous works, including Islamophobia, offensive language more often than violent language, and the refusal to offer public assistance to these collectives. View Full-Text
Keywords: Twitter; hate speech; topic modelling; natural language processing; VOX Twitter; hate speech; topic modelling; natural language processing; VOX
►▼ Show Figures 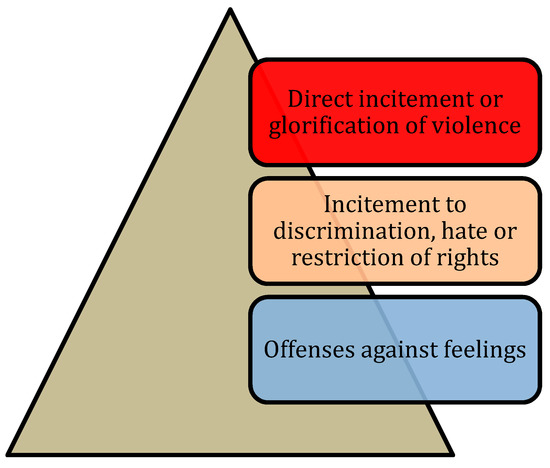 
Calderón, Carlos Arcila, Gonzalo de la Vega, and David Blanco Herrero. 2020. "Topic Modeling and Characterization of Hate Speech against Immigrants on Twitter around the Emergence of a Far-Right Party in Spain" Social Sciences 9, no. 11: 188. https://doi.org/10.3390/socsci9110188