:
The handling of a large amount of data to analyze certain behaviors is reaching a great popularity in the decade 2010–2020. This phenomenon has been called Big Data. In the field of education, the analysis of this large amount of data, generated to a greater extent by students, has begun to be introduced in order to improve the teaching–learning process. In this paper, it was proposed as an objective to analyze the scientific production on Big Data in education in the databases Web of Science (WOS), Scopus, ERIC, and PsycINFO. A bibliometric study was carried out on a sample of 1491 scientific documents. Among the results, the increase in publications in 2017 and the configuration of certain journals, countries and authors as references in the subject matter stand out. Finally, potential explanations for the study findings and suggestions for future research are discussed.
Keywords:
Big Data; education; bibliometric study; Internet

This study is characterized by following a bibliometric analysis methodology (Glänzel and Schoepflin 1999). So, following the guidelines and criteria of bibliometrics (Ardanuy 2012), was first established the combination of keywords: “Big Data” AND education. This combination was introduced in the search engine of the different databases. Thus, the scientific production is collected, in article format, from 2010 to 2018. The search took place during the second quarter of 2019, so all indexed literature is included in the year 2018.

The unit of analysis was composed by the scientific articles indexed in WOS, Scopus, ERIC, and PsycINFO that included in the title, abstract, or keywords the terms Big Data and education. Finally, the sample consisted of journal articles that met the inclusion and exclusion criteria. Inclusion criteria were considered: (i) scientific articles published in journals and peer-reviewed; (ii) year of publication since the term appears in the literature until 2018; (iii) search descriptors appear in the title, abstract or keywords; (iv) published in English language. Instead, the exclusion criteria were: (i) documents not subject to exhaustive peer review (reviews, theses, books, book chapters, conference proceedings, or technical reports); (ii) articles that did not belong to the limited time period; (iii) descriptors are not included in the title, abstract, or keywords; (iv) the language of publication is not English.
From its application, the sample of analysis was composed into 1491 documents: 491 in WOS; 706 in Scopus; 174 in ERIC; and 120 in PsycINFO.

Data analysis was performed from information extracted from the four databases. Excel and VOSviewer version 1.6.7 (Centre for Science and Technology, Leiden University, Leiden, The Netherlands) programs were used to support the analysis and graphical representation of the data.
On the other hand, the analysis variables were established from the review of previous bibliometric studies in the area of social sciences, with a topic similar to the object of study (Batanero et al. 2019; Hinojo-Lucena et al. 2019; Oravec et al. 2019; Rodríguez-García et al. 2019; Sudolska et al. 2019):
Publications by year.
Journals and countries with the highest number of articles.
Articles with greater impact.
Keywords.
In addition, the bibliometric laws of Price and Bradford were applied to verify diachronic productivity, i.e., productivity over the years (Price 1986) and to establish the nucleus formed by the journals with the largest number of articles (Urbizagástegui 2016).

The publications per year are mostly concentrated between 2016 and 2018, covering 75.92% of the articles published on Big Data in education. Likewise, its origin in literature begins in 2010, although the flow of publications begins in 2012 (Table 1).
Price’s law establishes that, after 10 years, the scientific literature tends to double, at the same time that it fixes three stages in the development and consolidation of the literature (Price 1986). In this respect, the premise of the duplicity of literature is confirmed, since by the year 2018 literature is much higher than in 2010 (Figure 1). Looking at the graph, the development stages of Price are set between 2010 and 2012 (precursors stage) and from 2012 to the present day, in the exponential growth stage.
On the other hand, Bradford’s law indicates that, by making an equitable distribution of articles by zones, a small cluster of journals (centre) is formed which collect an equivalent quantity of articles to the rest of zones (Urbizagástegui 2016). This is confirmed in the literature published on Big Data in education, where a small group of journals are the ones that collect the most articles on this topic (Figure 2). Specifically, in WOS the total is 346 journals and 491 articles, distributed in five areas with the same number of articles approximately (M = 98.2). In this sense, it is observed that the nucleus conformed by 16 journals contains a similar amount of documents to the rest of the zones. In Scopus, 419 journals and 706 articles are collected, distributed in five other zones (M = 141.2); the centre consists of six journals. In ERIC, there are 112 journals and 174 articles, grouped into five zones (M = 34.8) and with a core made up of four journals. Finally, PsycINFO groups 83 journals and 120 articles into five zones (M = 24) and with a core of five journals.
These journals, which make up the core, have a much higher than average number of articles. Among them, coinciding in the core of WOS and Scopus: Agro Food Industry and International Journal of Emerging Technologies in Learning (iJET). In WOS and ERIC: Theory and Research in Education. Moreover, in WOS and PsycINFO: Behaviour & Information Technology (BIT) (Table 2).
In relation to the countries with the highest scientific output, the top 10 are collected in each database. The United States stands out above all others, being the country with the largest amount of documents (30.65% of total publications on Big Data in education). China presents the second-largest collection of articles (21.66%) and the United Kingdom is in the third position (10.26%). Below are Australia (4.35%), Canada (3.62 %%), Germany (2.34%), India (2.74%), Italy (1.81%), Sweden (1.40%). %), Saudi Arabia (1.20%), South Korea (2.41%), Japan (1.34%), and Brazil (0.60%) (Table 3).
As for the articles with the greatest impact, depending on the number of citations, it was taken as a criterion that they had more than 100 citations. Thus, six articles are established that met this criterion (Table 4). The first of these presents 2921 citations in WOS and Scopus, entitled “Business intelligence and analytics: From Big data to big impact”, in which the authors analyse how big data influences society and specifically business, challenges, and opportunities associated with the company research and education are identified (H. Chen et al. 2012). Behind it is “Data Science, Predictive Analytics, and Big Data: A Revolution That Will Transform Supply Chain Design and Management”, a study conducted on how Big data helps improve supply chain management, they show that these terms are relevant to supply chain research and education (Waller and Fawcett 2013), with a sum of 562 citations. “Psychological Language on Twitter Predicts County-Level Heart Disease Mortality”, the authors gather analysis of Twitter data to predict cardiovascular disease, the education is significant in relation to big data analysis to predict such pathology (Eichstaedt et al. 2015), with 332 citations. “Applications of big data to smart cities”, a study is collected that applies big data to improve urban services, highlighting improvements in the public education service (Al Nuaimi et al. 2015), with 230 citations. “Big Data and analytics in higher education: Opportunities and challenges”, the authors carry out an analysis of the advantages and challenges of applying big data in university education (Daniel 2015), with 179 citations. “The evolution of big data and learning analytics in American higher education”, a study is carried out that gathers the advances in analytical data technology in higher education in America (Picciano 2012), with 125 citations.
Finally, the networks map between keywords reflects the relations generated between them (Figure 3). The size of the words indicates their frequency of appearance and a greater amount of connections with other descriptors. There are also three distinct clusters, each with a different colour (red, blue, and green). The red cluster is led by the concept “approach”, with the descriptors “analytic”, “science”, “article”, and “technique” prevailing. The blue cluster is headed by “platform”, highlighting the keywords “innovation”, “service”, “person”, “factor”, “health”, and “industry”. Finally, in the green cluster, “student” stands out and includes descriptors linked mainly to education: “teaching”, “university”, “problem”, “content”, “attention”, “training”, and “algorithm”. 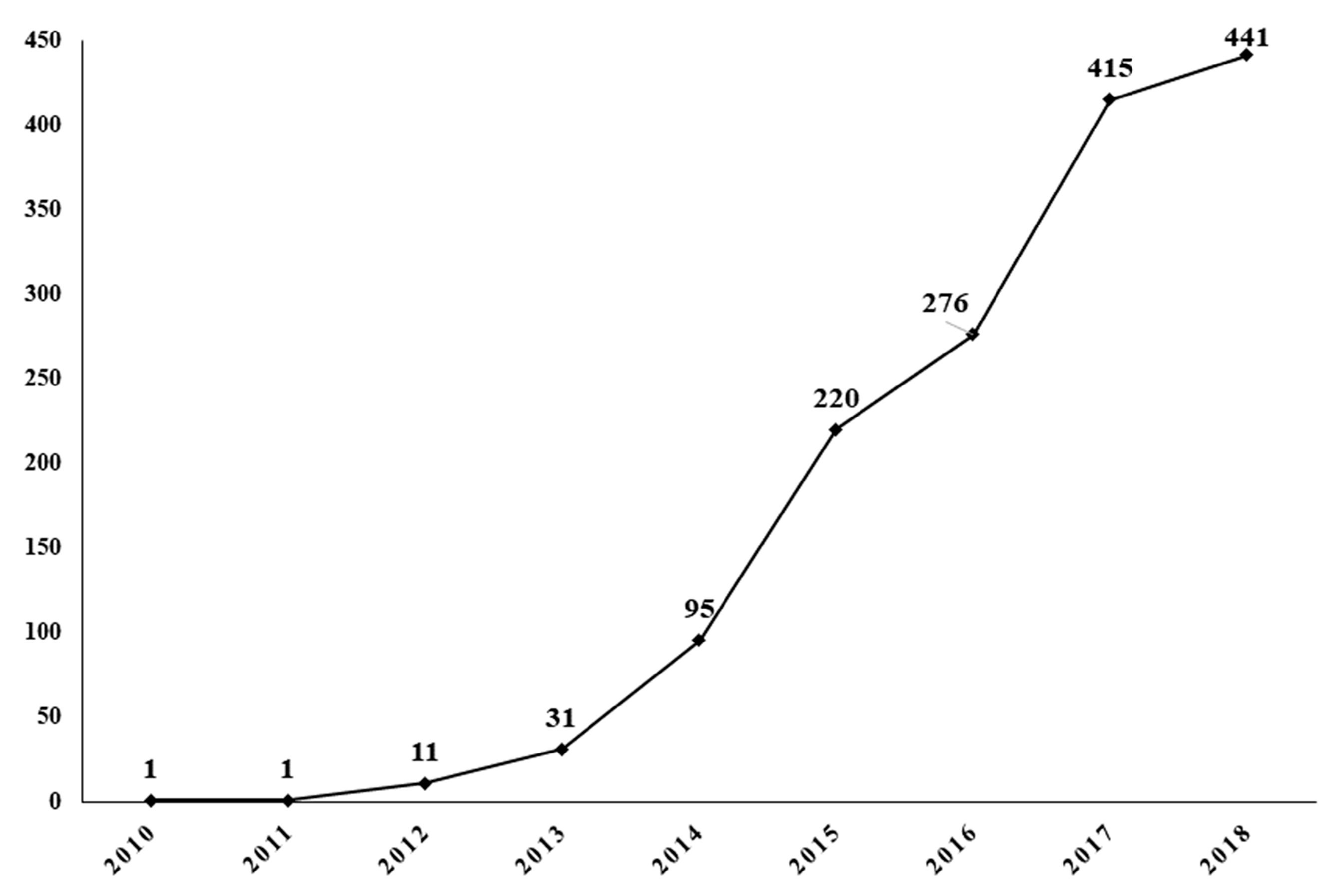