Befriending Your Food: Pigs and People Coming of Age in the Anthropocene
Previous Article in Journal

The Approach to Industry 4.0 within the Slovak Business Environment
Previous Article in Special Issue

The Rise of the Androgynous Princess: Examining Representations of Gender in Prince and Princess Characters of Disney Movies Released 2009–2016

Over Time and Beyond Disney—Visualizing Princesses through a Comparative Study in India, Fiji, and Sweden

Disney animated princesses are broadcasted around the world through Disney Channel and its global affiliates as well as through numerous other networks that purchase distribution rights. In an attempt to provide diversity in the last 25 years, Disney has featured nonwestern princesses such as those in Aladdin (1992), Pocahontas (1995), Mulan (1998), and Moana (2016). This study examines how princesses in animated Disney movies are perceived and understood by girls (8–15 years) in three different countries, over two time-periods with a gap of nearly a decade (2009 and 2018). The primary research question, considering Disney’s global reach, is how race, culture, and presence of a royal family interact with transnational access to the same media content in the perception of the princess concept and about being a girl. The selected countries provide an opportunity to explore differences in perception of Disney princesses between girls raised in countries with and without a royal family, and between girls in nonwestern and western countries. Differences in the perception are attributed to local and national cultures that allow a different lens to view the same content. A mixed method combining interviews, focus groups, and participant-generated images was used to gather data in India, Fiji, and Sweden. Results indicate Disney princesses, with their ubiquitous presence in various formats, e.g., media content, costumes and school stationery, have created a uniform idea of beauty across countries. Princesses in Disney were perceived by participants as being Caucasian and American, regardless of the race or country they represented. Girls in India and Fiji did not identify with Jasmine or Mulan, whom they considered ‘American’, whereas girls in Sweden considered Jasmine and Mulan as princesses of nonwestern origin. Girls in India and Fiji did not think they could be princesses because of their skin color, and did not want to lead a life ‘restricted with responsibilities’, but girls in Sweden considered the same question from the place of a choice, i.e., they preferred not to lead a ‘boring’ and regulated life like that of a princess. Participants from Fiji, with the least access to domestic programming that showed girls of their same Fijian origin, were least likely to consider themselves capable of being a princess. View Full-Text
Keywords: Disney; girls; beauty; transnational media; princess Disney; girls; beauty; transnational media; princess
►▼ Show Figures 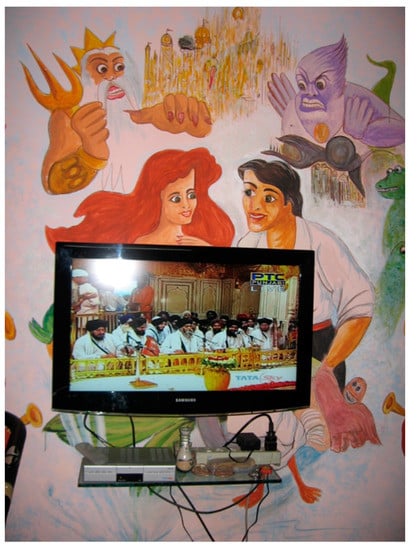