An Experimental Examination of Binge Watching and Narrative Engagement

:
Extant results on the binge-watching outcomes have been mixed. This study sought to examine the crucial factor of attentiveness that might help to enhance viewer experience and mitigate post-binge regret, as well as differentiate the motivation of narrative transportation from narrative completion. While narrative transportation involves a viewer getting unconsciously swept away by the story, the motivation of narrative completion is a more self-aware, cognizant effort to progress through the story. A survey (N = 800) determined that the degree to which an individual pays attention to a show may either increase or decrease subsequent regret, depending on the motivation for binge-watching.
Keywords:
binge-watching; streaming video; television; media effects; audience studies

With ubiquitous digital devices and nigh constant connectivity, binge-watching is now quite the preferred method of television consumption (Deloitte 2018). Yet this proliferation of content and accessibility means that while viewers have many options of what to binge, they also have plenty of options in terms of what to do while they binge. How does binge-watching change when we pay more or less attention to the program? To what extent are we affected by our choices to attend certain shows more closely than others? How does our experience change when we binge specifically to get swept away by a story or to learn what happens next in a new favorite show?
This study attempts to address some of these questions. It first conceptualized narrative completion (NC) as a motivation for binge-watching that overlaps with, but is ultimately distinct from, narrative transportation (NT). It then examined how both NC and NT relate to binge-watching, specifically how they might mitigate or exacerbate post-binge regret. Third, this study looked at attentiveness as a crucial factor in moderating how NC and NT predict varying levels of regret for both shows that demand higher degrees of viewer attentiveness (HVAS) and lower degrees of viewer attentiveness (LVAS). The purpose of this study was to examine the role of attentiveness as a factor that may interact with binge-watching motivations and, more specifically, how the degree to which viewers attend a show might influence whether and to what extent they later regret their binge.

Binge-watching has been defined as the screening of multiple episodes or hours of a televisual program in a row (Choi 2012; Rubenking et al. 2018; Strangelove 2015). McNamara (2012) provided one of the first formalized definitions: “any instance in which more than three episodes of an hourlong drama or six episodes of a half-hour comedy are consumed at one sitting” (p. 1). As binge-watching moved from niche behavior to ubiquitous practice, social scientists have increasingly relied on Pittman and Sheehan’s (2015) definition, “two or more episodes of the same series in a single sitting” (para. 25) for operationalization and survey design. Steiner (2018) found that binge-watching was often motivated by a sense of completion and desire to control how that completion was achieved. Viewers use the term “binge-watching” to describe their consistent attempts to finish a season or a series at an accelerated rate even if they watch fewer episodes or for fewer hours than would constitute “a binge”. Building on these definitions, we positioned binge-watching for this project as the viewing of three or more episodes of a show in a row (or two episodes, if it is a longer show) or watching a whole season of a show within a week.
Steiner and Xu’s (2018) viewer attentiveness spectrum organizes TV content by attentiveness required to attain specific gratifications. Viewers seeking relaxation tend to select lower VAS (LVAS) programs, while those seeking an enhanced viewing experience tend to select higher VAS (HVAS) programs. The literature suggests that LVAS shows (often sitcoms, procedurals, reality television with fewer locations and characters, formulaic themes and in-show updates and/or repetition) and HVAS shows (often prestige dramas with multiple characters and locations, and complex plots and dialogue) are both widely binge-watched, but the motives, behaviors, and outcomes of viewers vary by their content selection (Petersen 2016; Steiner 2017).

To address these research questions and hypotheses, an online survey (N = 800) was conducted on Amazon’s Mechanical Turk (MTurk) platform. Due to cost effectiveness, participant diversity, expediency, and data quality, MTurk is an increasingly popular platform for academics (Sheehan and Pittman 2016). After reviewing a consent form and brief project description, participants clicked to indicate their participation in the survey and afterwards were paid $0.56. The overall sample size of 800 yielded 400 participants apiece for the HVAS and LVAS sections, which, even after deleting a small number of incomplete responses, yields a larger sample size (Vanvoorhis and Morgan 2007) than is necessary for correlation, regression, mediation, and moderation analyses (S. B. Green 1991; Hayes 2009). Qualtrics was used to administer the survey, and SPSS (version 24) was used for all statistical analyses.

Despite its negative stigma (Downey 2018; Gregoire 2015; Hsu 2014), binge-watching clearly has benefits. Whether because of emotional modification (Rubenking and Bracken 2018), pleasure from enhanced viewing (Steiner and Xu 2018), being swept away into another world (Erickson et al. 2019), aesthetic appreciation (Pittman and Sheehan 2015), or simply because it is entertaining (Sung et al. 2018), viewers binge-watch all kinds of content for many reasons. The present study adds an important qualifier to this growing body of research: Whatever viewers binge-watch, they will probably regret it less if they actually pay attention.
This study conceptualized narrative completion (NC) as a motivation for binge-watching that overlaps with, but is ultimately distinct from, narrative transportation (NT). By examining how NC and NT relate to binge-watching—particularly how they might mitigate regret—we hope to change the cultural stigma of binge-watching as a strictly negative, unhealthy behavior. Furthermore, this study looked at attentiveness as a crucial factor in moderating how NC and NT might influence regret, and by setting up a distinction between HVAS and LVAS shows, we hope to similarly move the conversation away from binge-watching as a single behavior that works the same for all people, all the time. Overall, this study demonstrates the importance of attentiveness as a factor that, depending on their motivations for binging in the first place, can influence whether or not they later regret the experience.

The two authors contributed in the following ways: M.P. wrote methods and results, E.S. wrote literature review, and both wrote discussion and conceptualized project together. 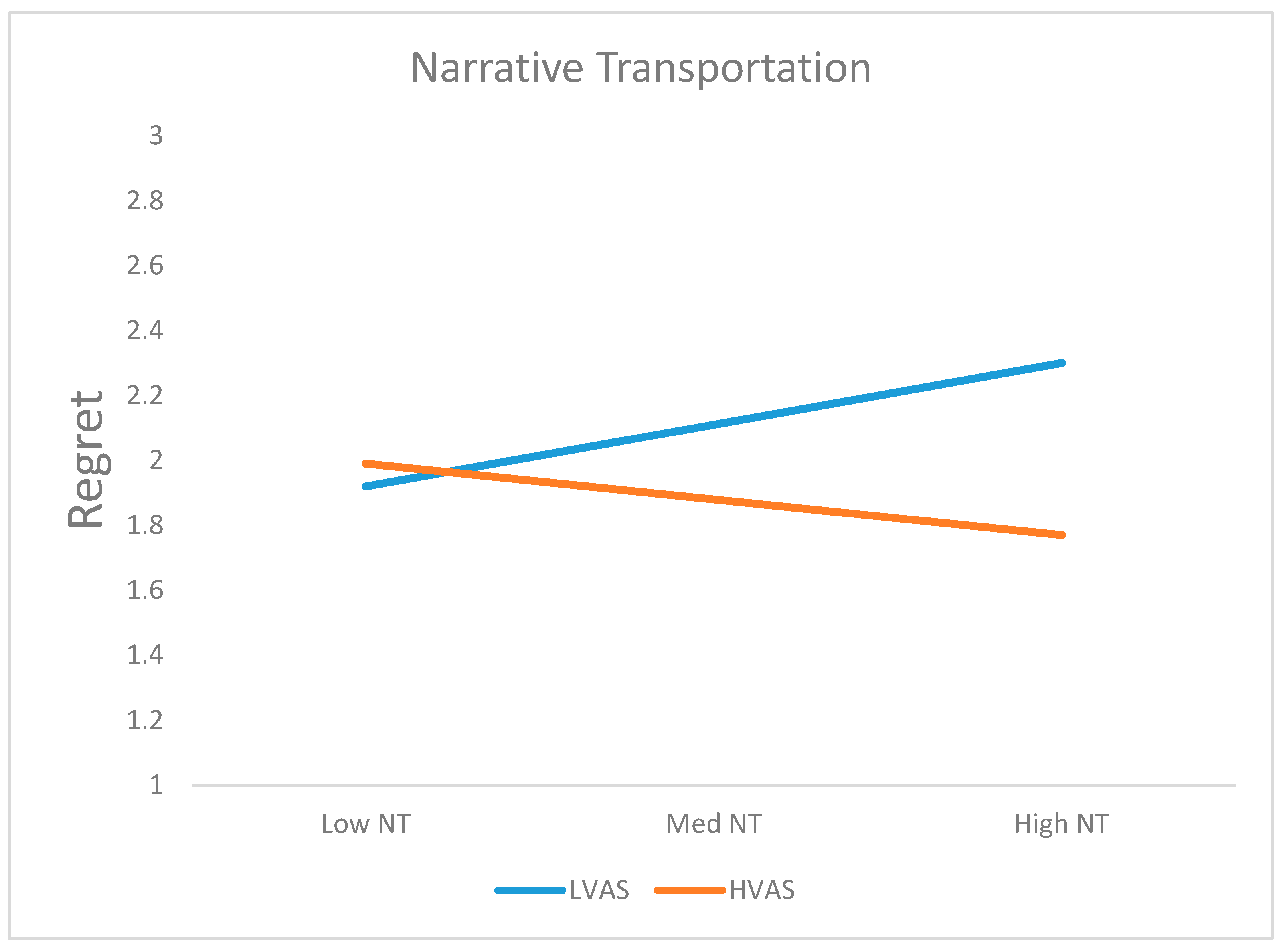