The Impact of Violent Crime on Obesity
Previous Article in Journal

Retailing, Consumers, and Territory: Trends of an Incipient Circular Model

:
All scientists, researchers, and citizens are involved in achieving sustainable goals. Their current actions contribute to writing a story for future generations, and interesting perspectives can be narrated based only on a great sense of social responsibility. The literature gives a great deal of attention to the models of a Circular Economy (CE). This topic is multidisciplinary and different sectors are involved in its development. This Special Issue aims to underline the relevance of the CE models in the scientific field and its applications in real contexts in order to achieve sustainability goals.
Keywords:
circular economy; social sciences; sustainability

The Circular Economy (CE) model is able to support sustainable development and has gained attention among policy makers, scholars, and practitioners (Ghisellini et al. 2016). The European Environment Agency has interpreted the CE as the core of a Green Economy perspective that extends the focus from waste and material use to human well-being and ecosystem resilience (see Figure 1) (European Environment Agency 2015). Transitioning to a CE cannot only be used to overlap the linear ‘take, make, and dispose’ economic model and the Ellen MacArthur Foundation identifies three principles in this regard (The Ellen MacArthur Foundation 2013):
The World Economic Forum in collaboration with several organizations, such as the Ellen MacArthur Foundation and World Resources Institute, has published a document called Platform for Accelerating the Circular Economy (PACE) in 2017 with the aim to adopt the principles of CE on the global scale. The waste created by a linear economy damages human health and the environment. Instead, waste that comes from several processes and is inserted into a circular economy provides “beneficial artifacts” for human use (Sikdar 2019). The importance of engineering considerations and design is considered to be vital in order to develop processes in which all parts of a material can be reused/recycled/recovered, thereby minimizing the amount of waste and its dangerousness if it would otherwise end up in landfill (Varbanov and Walmsley 2019).
The conceptualizing of the CE is provided by several works. Some authors provided the following observations. The first that CE is not always associated with the 3R framework (reduce, reuse, recycling) and generally with the waste hierarchy, but instead is often referred to only in the context of recycling. The second that CE is not only a change of the status quo, but also requires a change to a system perspective. The third suggests that the link between CE and sustainable development is weak, as economic prosperity followed by environmental quality are considered, while the impact on social equity is not analyzed. Finally, business models and consumers are evaluated as enablers of CE (Kirchherr et al. 2017).
CE aims to reduce both virgin material inputs and waste outputs by closing resource flow loops. Instead, the goals of sustainability are open-ended. However, the CE is defined as a condition for sustainability, and there are a wide range of complementary strategies that managers and policymakers can adopt (Geissdoerfer et al. 2017). In this way, the value of products and materials is maintained for as long as possible. Consequently, this approach assigns a relevance to material cycles characterized by high value and high quality (Amato et al. 2019). This provides an opportunity to develop an economic model in which both the production phase and the consumption phase are directed towards the protection of the environment (Korhonen et al. 2018). The direct relationship between the CE model and sustainable development is verified by quantitative analysis in which the profitability of the investment project and the reduction of the greenhouse gas emissions are both defined (D’Adamo et al. 2019).
This transition towards circularity requires us to measure its effects. It is possible to estimate a consistent number of indicators and they are specified in function of several criteria, as the levels of CE implementation, the CE loops, the performance, the perspective of circularity, and the degree of transversality (Saidani et al. 2019). The most commonly used methodologies to assess CE are Life Cycle Assessment, Life Cycle Inventory, and Life Cycle Impact Assessment followed by a Multi-Criteria Decision Making approach/fuzzy methods and Design for X (Sassanelli et al. 2019). The final aim is to demonstrate whether restoration and closed-loop product lifecycles are able to reduce waste, minimize the impact of toxic and harmful substances, keep the added value embedded in products and materials, and encourage the use of renewables. In addition, CE plans and targets must be characterized by a “human component”, through training and building capacities: an integrative green human resource management framework is provided to support organizations (Jabbour et al. 2019).

2. Form and Contents of the Thematic Issue

Based on these concepts, this Special Issue tries to add new knowledge to the existing literature on the CE. The final aim is to support the adoption of the CE paradigm in companies and organizations around the world. Due to the different sectors and perspectives related to the application of this model, the following papers propose several approaches.
The first work focuses its attention on the photovoltaic source, which represents a vital actor in a transition towards a low-carbon society. The study investigated both environmental and economic performances of photovoltaic systems in a market evaluating different policy scenarios. Subsidies provide a significant increase to profitability, and the reduction of greenhouse gas emissions is calculated as the difference between ones created by an energy mix based on fossil fuels and ones created by photovoltaic plants. Findings show the positive role of a renewable resource towards the link between sustainable development and CE application (D’Adamo 2018).
In a subsequent paper, economic growth was used as the dependent variable, in a function of independent variables, such as the productivity of resources, employment in the production of environmental goods, the recycling rate of municipal waste, market shares of innovative enterprises, and renewable energy uses. The analysis was conducted at the European Union level and the econometric model used demonstrates that the CE factors are relevant indicators of economic growth. Findings of this model permit us to quantify the contribution of each independent variable to the circularity with a primary role played by the productivity of resources (Busu 2019).
The third paper considers the quantitative status of employees in the Health and Social Care sector. Initially, it mentions that this sector fits the theory of unbalanced growth, in which there is has been decreasing productivity calculated based on the gross value added per employee. In the second part of the work, several European countries were examined in terms of their shares of employed persons in professions of this sector, providing specific country clusters. Also the Health and Social Care sector supports the development of circularity, thanks to the availability of technology and cooperation possibilities among all interested parties (Urbánková 2019).
Another work is based on a mixed data, involving continuous and categorical variables and it is aimed to evaluate the performance of solid waste management. This typology of waste represents an opportunity for municipal authorities to maximize the value of materials embedded in these waste and minimize the landfill use. A cluster analysis was implemented on these data. Findings of this work show the relationship of both waste generation and levels of CO2 emissions with recycling activities and awareness campaigns. Their role has been demonstrated be relevant towards the implementation of good practices of circularity (Caruso et al. 2019).
The fifth paper explores the potential development of a second-generation biorefinery in a touristic area trying to integrate waste management, renewable energy, and bio-product production. A Strengths, Weaknesses, Opportunities and Threats Analytical Network Process was used as a model. The results calculated the global priority of each factor and found that social acceptability occupies the first position, followed by excessive bureaucracy, green jobs, lack of long-term planning by governments, and lack of infrastructure technology. Circularity can be supported by some policy strategies, as e-government services, information campaigns, and public infrastructural investments (Falcone 2019).
A subsequent paper evaluates the principles of the CE applied to the manufacturing context. Specifically, a new business model for a ceramic tile manufacturer has been investigated evaluating the impact of an eco-design with a supply system of raw materials. The performance of the company was evaluated while considering the distance of the sources of supply from the factory and relative transport systems. In addition, a recycling process was proposed for the fired waste generated during the production phase. Findings show that eco-design associated with Industry 4.0 Internet of Things technologies can reach the equilibrium point between sustainability and CE (Garcia-Muiña et al. 2019).
Another work investigated the opportunities of the digital transformation of education on CE development to reach the goals of sustainability outcomes. Content analysis and the qualitative meta-synthesis of scientific works referred to digital education for sustainability were used as the methodology. Integrated findings were proposed for capital- and neo-capital-based multiple value formations, for emerging tools and technologies, for micro level interactions among actors and structures, and for macro level interactions among actors, structures, and technologies. As such, the learning of the value embedded in the CE transition requires customizable niches of learning preferences (Türkeli and Schophuizen 2019).
Finally, the last paper concerns the retail distribution and the transition from a linear to an incipient circular retail model. The framework used was based on the Retail Wheel Spins Theory and the Retail Life Cycle. This new circular model can be an opportunity for small entrepreneurs if they are able to intercept the production/selling of products based on a green-image and at the same time, consumers indicate growing interest towards this brand. The theoretical approach suggests that the CE transition can represent a solution to the crisis of the local market favoring the local image of the specific municipalities and provides a contrast to the power of the digital market (De-Juan-Vigaray and Seguí 2019).

3. Concluding Remarks and Further Issues on the Research Agenda

This Special Issue has demonstrated that the field of social sciences is interested in the development of CE models. Its development concerns several sectors and different authors have underlined this as circular economy concept moves towards the final aim of sustainability. The development of a closed loop cycle is a necessary condition to develop a CE model as an alternative to the linear model in order to maintain the value of products and materials for as long as possible. For this motive, the definition of the value must be demonstrated for both the environment and the economy. The presence of these analyses should be associated with the social dimension and the human component.
This editorial suggests some areas of research to investigate in the future:
A strong cooperation between social and technical profiles is a new challenge for all researchers. The End of Life of products attracts a lot of attention and the final output could be the production of technologies suitable for managing this waste and in doing so quantifying both economic and environmental benefits according to the principle of CE. 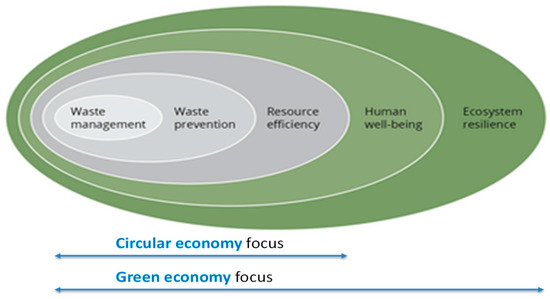 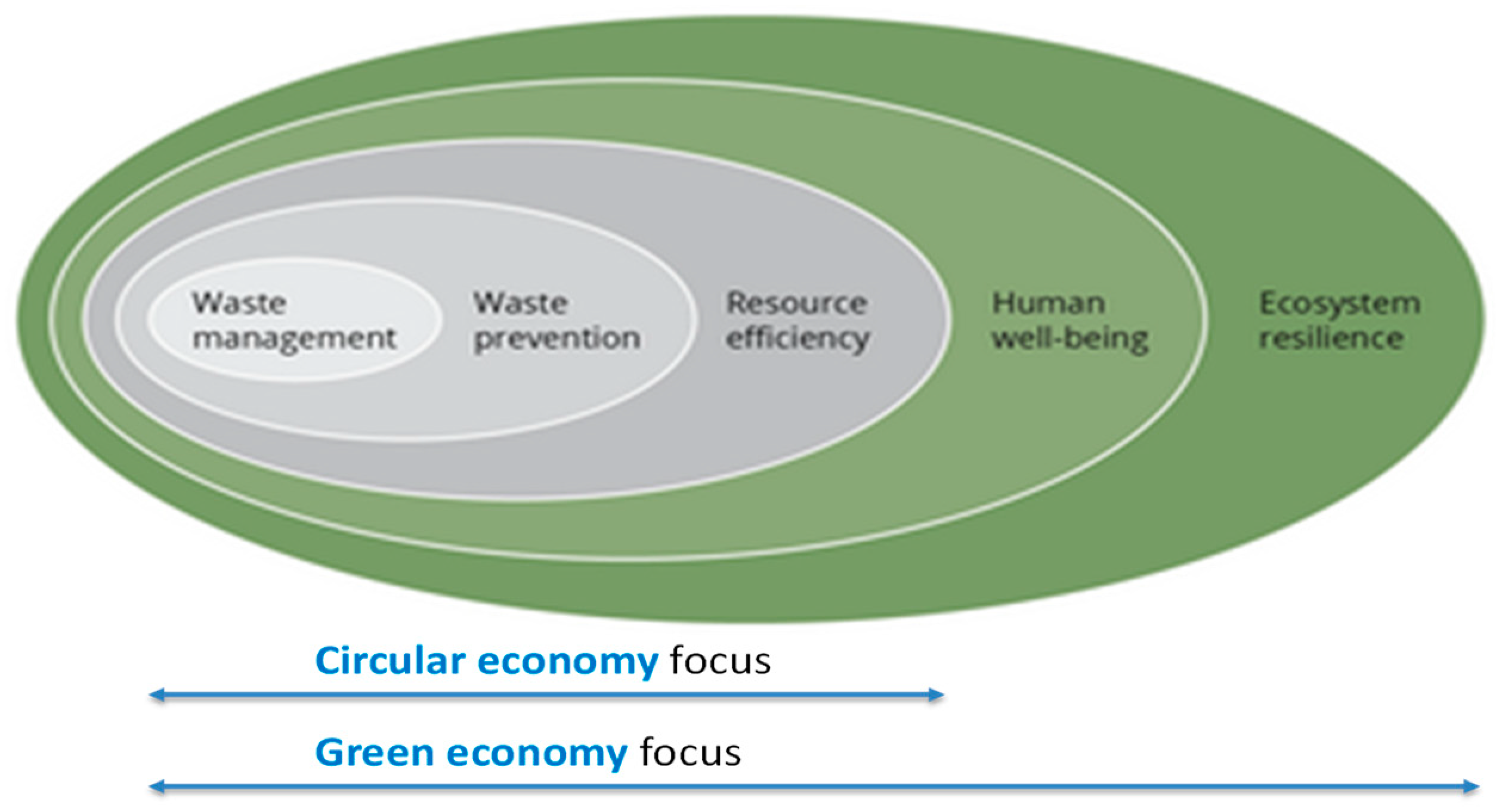