Deconstructing Civil Society Actors and Functions: On the Limitations of International Frameworks for Fragile States

Oil and Gas Rents and Civilian Violence in the Middle East and North Africa, 1990–2004: A Resource Curse, or Rentier Peace?

Acts of civilian violence have long plagued parts of the Middle East/North Africa (MENA) region. Extant research debates whether countries that rely on natural resource revenue for economic solvency are more or less likely to experience such violent events. This analysis takes a novel approach to this issue, examining the unique effects of publicly and privately controlled oil and gas rents on civilian violence in the MENA region from 1990 to 2004. Data on civil violence events are drawn from the World Handbook of Political Indicators IV. Results indicate that publicly owned oil and gas rents reduce civilian violence, while privately owned oil and gas rents do not significantly affect such events. This lends support to the notion that oil and gas rents are not necessarily a curse, and can actually foster a “rentier peace.” More broadly, these results underscore the importance of delineating ownership structure when examining the relationship between natural resources and conflict. View Full-Text
Keywords: conflict; civil violence; resource curse; rentier peace conflict; civil violence; resource curse; rentier peace
►▼ Show Figures 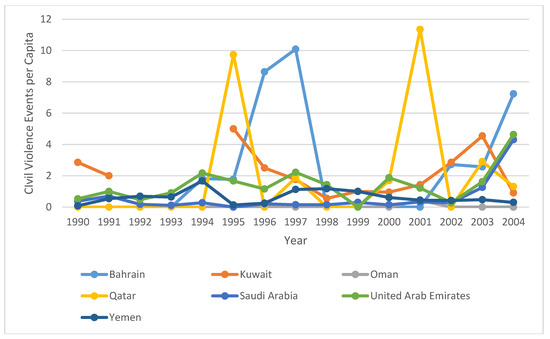