Labouring in the Sex Industry: A Conversation with Sex Workers on Consent and Exploitation
Previous Article in Journal

No One Smiles at Me: The Double Displacement of Iranian Migrant Men as Refugees Who Use Drugs in Australia

Digital Prospects of the Contemporary Feminist Movement for Dialogue and International Mobilization: A Case Study of the 25 November Twitter Conversation

:
The feminist movement is experiencing the rise of a new generation characterized by specific phenomena linked to technological progress, such as hashtivism, i.e., mobilization through social media. With the aim of contributing to extending our knowledge of the implications of Twitter for this as well as other social movements, this article examined eight of the most common Spanish- and English-language hashtags used to commemorate the 25 November 2018 event, the International Day for the Elimination of Violence against Women. Employing big data analysis to study social and communications phenomena, the results offer a picture of contemporary feminism through the kind of international digital dialogue or conversation that it creates, as well as questioning Twitter’s validity in terms of cohesion when it comes to uniting forces in relation to one of the movement’s most urgent struggles: eliminating violence against women in all its forms.
Keywords:
gender violence; 25 November; feminism; Twitter; hashtivism

Structural analysis methods such as Social Network Analysis (SNA) have demonstrated their capacity for the analysis of interactions on social media as a mixed methodology, that is, both quantitative and qualitative (Crossley 2010; Edwards 2010; Tremayne 2014), considering the possibility of articulating analytical strategies that combine mathematical and computational rigour with interpretative skills characteristic of social theory.
Social media offer a large amount of data that can be easily computed as a matrix of relationships (e.g., mentions among users, “friend” or “follower” relationships among users or relations set up between users and content), and so the data extracted from social media becomes a big data source through user–platform and user–user interactions (e.g., publications, mentions, likes, swipes or shares).
Specifically, our research focused on the microblogging social platform Twitter and was carried out using the Twitter Capture and Analysis Toolset, developed by the University of Amsterdam’s Digital Methods Initiative (DMI-TCAT) (Borra and Rieder 2014). This has been considered to be one of the most useful open Twitter analysis tools (Felt 2016) since it permits the capture of a wide variety of information from the Twitter social networking service in real time or retrospectively
This offers an unprecedented level of access to the store of online human activity over time (Del Fresno-García 2014). After all, as pointed out above, Twitter makes it possible to observe the social or interpersonal relationships that provide the connection between individuals or organizations, that is, the forms in which actors are linked, which determines the general structure of the network, its groups and the positions of the individual profiles within it.
The use of the Twitter Capture and Analysis Toolset made it possible to monitor the flow of interactions on the Twitter social networking service and to download the data regarding the following hashtags between 22 and 28 November 2018 (that is, from three days before to three days after the 25 November commemoration): #25N; #25nfeminista; #Diacontralaviolenciadegenero; #Iflovehurts; #Niunamas; #Stopviolenceagainstwomen; #Violenciacontralamujer; #Whiteribbonday. Activity related to the following combinations of words was also monitored, capturing any tweet that contained both concepts (not necessarily in the following order): mujeres + violencia (Spanish); women + violence (English); Noviembre + 25 (Spanish); November + 25 (English).
Using this protocol, a total of 881,887 tweets were captured around the world in English and Spanish, in a conversation involving 473,157 unique users. These tweets contained a total of 705,769 unique mentions among 439,859 unique users, which were entered into the Gephi social network analysis software.
In order to facilitate viewing the network and the interpretation of the phenomenon analysed (Venturini et al. 2019), the Force Atlas 2 (Jacomy et al. 2014) algorithm has also been applied. This measures proximity between those nodes that have interacted, and the distance between those that have not done so. In identifying communities, the role of the analyst consists of interpreting the results of a process of grouping nodes based on the patterns that the algorithm itself is autonomously able to identify in the data, using software such as Gephi.
Bearing in mind the goals of this study, as well as the scientific context in which it is set, the problem involved an exclusive methodological design, developed ad hoc to examine this study’s specific problem. In order to identify the importance of users, their “degree of entry” was taken; this is the number of times that each user is mentioned by other users of the service. In order to identify the conversation that each user participated in, the Louvain algorithm for community detection (Blondel et al. 2008) was applied.
Furthermore, in this study, the concept of social homophily takes on particular importance; this is the tendency of individuals to relate more or have more relational links with those who have similar social characteristics (Verd et al. 2014). Thus, in this study, the “degree of intercommunity homophily” was identified for each pair of communities using the E-I index (Krackhardt and Stern 1988). This index provides a figure between 0 and ±1, where a value of -1 indicates perfect homophily (users are only linked with actors from their own community), a value of 0 indicates neutrality or indifference (users are equally linked through nodes of their own community and those of the other) and a value of 1 indicates perfect heterophily (users are only linked with users of the other community).
Given that the communities have been calculated using the Louvain Multilevel algorithm which generates communities with homophilic criteria, the key point about this last piece of evidence lies in seeing the differences between pairs of communities. In other words, there is an examination of which pairs of communities are the least homophilic, given that the occurrence of high or very high levels of intercommunity homophily were to be expected.

The following are available online at https://www.mdpi.com/2076-0760/10/3/84/s1, Table S1: Communities according to their leading accounts and main tweets. Table S2: Level of connection between clusters and degree of intercommunity homophily.

This article is part of the scientific activities of ‘Gureiker’, a research group (A) (Ref. IT1112-16) of the Basque University System (Journalism Department, Faculty of Social Sciences and Communication of the University of the Basque Country), and of the Spanish Ministry project entitled “News, networks and users in the hybrid media system” (Noticias, redes y usuarios en el sistema híbrido de medios). 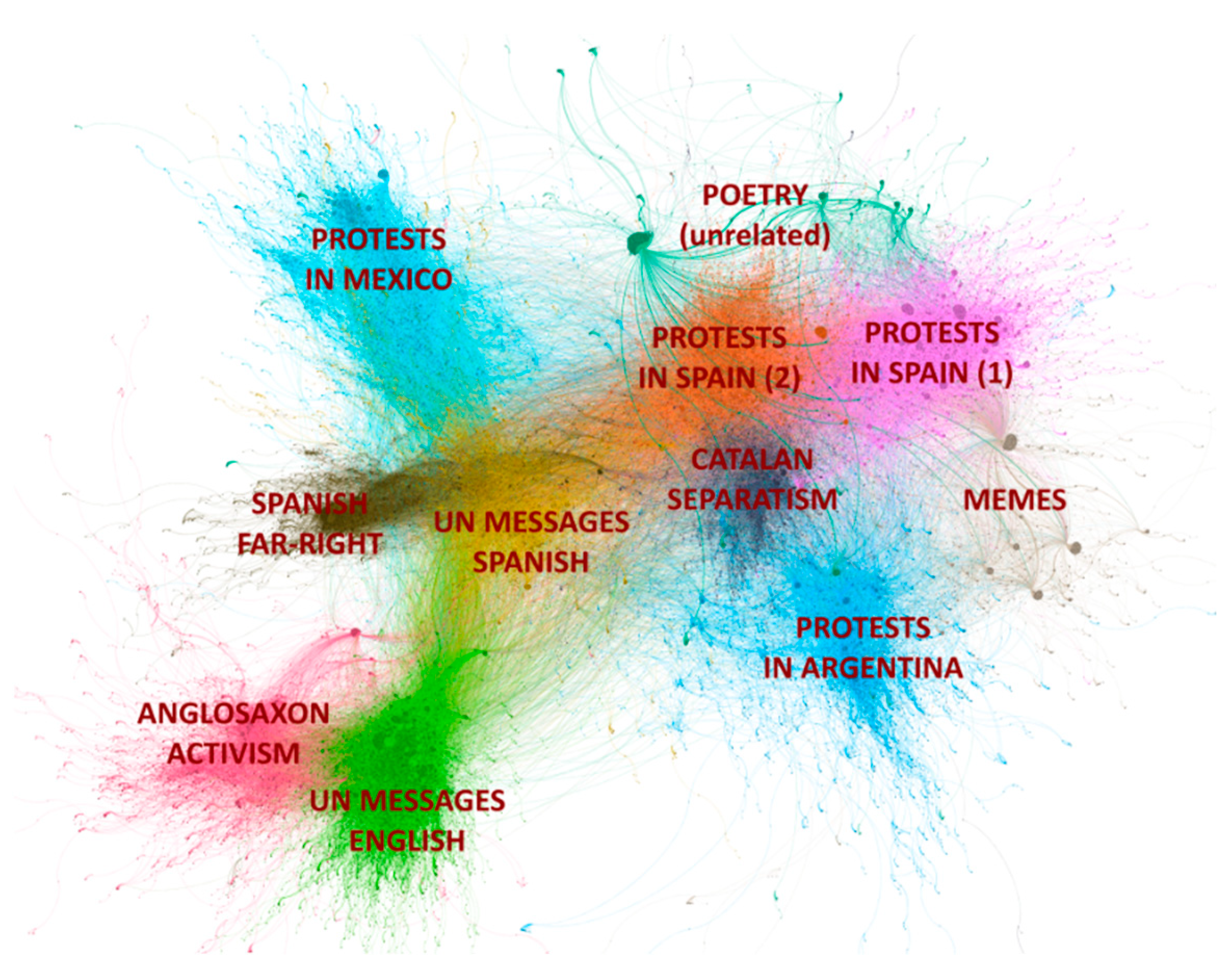