A Search for the Hidden King: Messianism, Prophecies and Royal Epiphanies of the Kings of Aragon (circa 1250–1520)
Previous Article in Special Issue

The motif of three women sharing the same mantle is pictured on about a dozen vases dating from the first half of the sixth century BCE. Among these vases, the so-called “François Vase” and a dinos signed by Sophilos (now in London, British Museum) are of particular interest. The wedding of Thetis and Peleus is pictured on both vases. This theme is well-adapted to the representation of a procession of deities in which the Charites, Horai, Moirai, and Muses take part. The main feature of these deities is a shared mantle, which covers and assembles them, emphasizing that these deities are plural by definition. The main study on this iconographical theme remains that by Buchholz, who documented most of the depictions of the “shared-mantle” in ancient Greek vase-painting and small terracottas. The shared-mantle motif has been interpreted successively as a reference to the sacred peplos (in relation to the wedding), a simplification from the painter to avoid painting all the mantles, a sign of emotional/sexual union, a religious gesture, and a depiction of choruses. The present study aims to consider in more detail the “shared-mantle” as an iconographic sign that involves the idea of community, shared identity, and emotional bond. View Full-Text
Keywords: iconography; Greece; vase-painting; wedding; mantle; chorus iconography; Greece; vase-painting; wedding; mantle; chorus
►▼ Show Figures 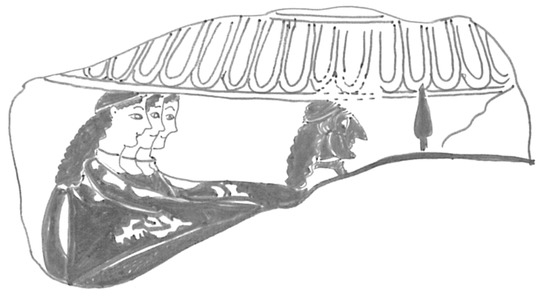