A Solar Thermal Application for Mongolian Detached Houses: An Energy, Environmental, and Economic Analysis Based on Dynamic Simulations

Ulaanbaatar (Mongolia) is the coldest capital city in the world with approximately 98% of its heating demand satisfied by means of coal-burning stoves. This leads to enormous air pollutant emissions, with Ulaanbaatar being one of the top five most polluted cities in the world. In this study, an innovative solar hybrid heating system for the Mongolian scenario was used, which was based on the operation of a solar field composed of four series-connected evacuated tube heat pipe collectors, coupled with a thermal energy storage. The solar hybrid heating system was simulated and analyzed using the software TRNSYS. The simulations were designed to satisfy the heating demand of a typical single-family detached house located in Ulaanbaatar and were carried out with and without considering the soiling effects on the solar system operation. The overall performance of the proposed plant was compared with those associated with different fossil fuel-based Mongolian conventional heating systems, in order to assess the potential energy, environmental and economic benefits. The results highlighted that the proposed plant allowed for the obtainment of significant reductions in terms of primary energy consumption (up to 34.6%), global CO2 equivalent emissions (up to 52.3%), and operating costs (up to 49.6%), even if the expected return on the investment could be unacceptable. View Full-Text
Keywords: air pollution; harmful emissions; solar energy; energy saving; clean energy; dust deposition air pollution; harmful emissions; solar energy; energy saving; clean energy; dust deposition
►▼ Show Figures 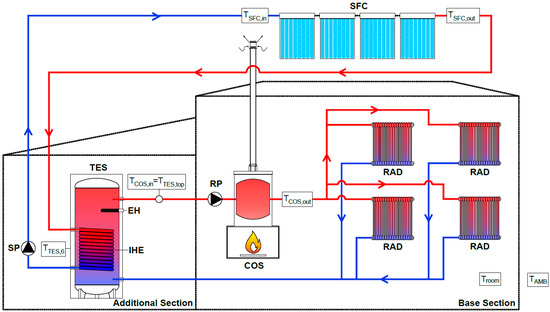 Rosato, A.; Erdenedavaa, P.; Ciervo, A.; Akisawa, A.; Adiyabat, A.; Sibilio, S. A Solar Thermal Application for Mongolian Detached Houses: An Energy, Environmental, and Economic Analysis Based on Dynamic Simulations. Buildings 2019, 9, 185.


Rosato A, Erdenedavaa P, Ciervo A, Akisawa A, Adiyabat A, Sibilio S. A Solar Thermal Application for Mongolian Detached Houses: An Energy, Environmental, and Economic Analysis Based on Dynamic Simulations. Buildings. 2019; 9(8):185.