:
We present observations from evaluation of internal environmental quality of industrial halls with priority on daylighting in combination with the integral lighting. The physical parameters related to indoor lighting in large industrial halls in winter and summer periods were analyzed using in situ measurements and computational methods. These are part of a comprehensive research on indoor environmental quality of industrial halls with the aims of saving energy and providing a comfortable environment for the workers while improving the productivity. The results showed that the procedures used for evaluation of residential or office buildings may not be used for industrial buildings. We also observed that the criteria of occupants’ comforts for indoor industrial buildings may differ from those of other kinds of buildings. Based on these results, an adequate attention is required for designing the industrial buildings. For this reason, appropriate evaluation methods and criteria should be created. We found the measured values of daylight factor very close to the skylight component of the total illumination. The skylight component was observed on average 30% that of the measured daylight factor values. Although the daylight is not emphasized when designing the industrial buildings and its contribution is small, but it is very important for the workers psychology and physiology. The workers must feel a connection with the exterior environment; otherwise, their productivity decreases.
Keywords:
industrial building; environment; lighting analysis; building physics; sustainable architecture; computational simulation; integrated lighting; solar radiation; luminance; sky components

2. Design and Evaluation of Daylight in Manufacturing Hall

In design of buildings, it is necessary to sufficiently illuminate internal spaces to the level satisfying the standard requirements. This can be achieved through correct selection of lighting systems that would ensure the required light flux and consequently, efficient visibility during work, and provide visually comfortable environment for the building occupants. However, the lighting systems do not always ensure the required amount of daylight, especially when the area of the space is large, there is excessive dirt in the upper lighting system, or when the room is shaded by the surrounding buildings. In these cases, it is necessary to supplement natural daylight with an artificial lighting system. The combination of daylight with artificial lighting is determined by related standards under titles such as “Combined lighting of buildings” and “Integral lighting of buildings” [73,74].
In addition to natural daylight characters with its dynamics and variations during the year and each day, it is useful for every building and the occupants from various aspects. This fact is important not only from the physiological but also from psychological aspect. The selection of lighting systems for the given buildings depends on the load-bearing structural system, design of the object, and on the type of activities to be carried out in the building. In residential, civil, and light industrial buildings, where the individual departments are above each other, illumination is provided by light through windows. In heavy industry and single-storey workshops, various types of lighting systems and transparent surfaces with glass and plastic materials are used.
The indoor spaces without access to natural daylight in which lighting is provided only by artificial electric lamp system have not been successful for some reasons. For instance, in such circumstances, the connections between the interior and exterior parts of the building are interrupted. These spaces provide no natural ventilation and the ultraviolet component of solar radiation does not enter the inner spaces. The use of buildings with daylight has some benefits, as stated earlier, but a careful approach must be taken to their construction, proposal, and applications.
Recently, many light engineering standards have been revised with changes related to both natural daylight and artificial lighting. A new regulation of the problems for the formation of an internal space using combined lighting has been introduced [74]. This problem was dealt with in only a small number of selected sections of the earlier light standards. The requirements represent a qualitatively new formulation of standardization criteria including new approaches to design of lighting systems.
Daylight can be illuminated into the buildings in various ways from side, top, or combined from both directions, as shown in Figure 2. Side and top lighting can also be arranged in various forms, as presented in the chart in Figure 3. The standard CSN 360020 with a title of “Integral lighting of buildings” determines the minimum required values of DF for a single space in a building depending on its purpose [75]. These values are used as a basis to apply combined system of lighting (daylight and artificial illumination). The main starting point for determining the requirements on the level of combined lighting is the classification of the visual activities performed in the building, according to STN 730580 “Lighting of buildings during the day” and CSN 360450 “Artificial lighting of internal spaces” [76,77].
The values of DF on the working places in which the workers permanently stay inside, the overall and graded combined illumination lighting must correspond to the values presented in Table 1, based on the national standard method of CSN 360020. In this standard, the buildings are classified into seven groups according to the intensity of the visual activities performed inside the building. Similarly, in the Slovak Republic standard STN 730580-1, the values of DF are grouped into seven categories representing human eye recognition for visual detail tasks. This standard classification spans from visual tasks with extreme accuracy (Category I) to those with no visual challenge (Category VII). The parameter for the observation relative distance is defined as the ratio of detail dimension to distance between detail and the observer eye, which is used for the categorization of visual tasks. For the permanently occupied indoor spaces, the DF value should be larger than 1.5% and 3% for the side-lit and top-lit illuminated spaces, respectively. To reduce or avoid glare, the brightness of window must be less than 4000 and or 60 cd·m–2 in the visual field of the observer for side-lit and top-lit illuminations, respectively. The observed ratio of luminance detail in the sky brightness should be less than 1:200th.

The indoor environmental quality from the perspective of daylighting was evaluated based on DF values, which expresses the ratio of the indoor to the outdoor horizontal lightings of an unshaded plane. It is calculated through addition of the three components contributing to DF, including Sky component Ds, internal reflection Diρ, and external reflection Deρ. The illumination may take place in three ways, from side or top of the building or combined in both ways (Figure 3).
Values of DF in interior spaces of buildings are generally evaluated using two computational methods: flow (simulation) and point (graphical or numerical, manually or using computer) procedures. Choice of the computational method depends on the purpose. The most accurate method is using simulation programs, which can make photo-realistic image of an interior space. Generally, standards prefer the use of the point calculation method.
In other words, DF is a parameter expressed as a ratio of EiH, the interior illuminance at a specific point on a given plane due to the light received directly and indirectly from the sky (with assumed or known luminance distribution), to EeH, the exterior illuminance on the horizontal plane from an unobstructed hemisphere of the overcast sky, both quantities in lux (Equation (1)). Direct sunlight is excluded for both values of illumination. where Ds, Di, and De are sky, internally reflected, and externally reflected components of DF in percentage, respectively. These components are graphically shown in Figure 4. The DF value depends mainly on several parameters: Windows geometry and placement in facade, room walls and overhangs, light transmittance of glazing and shading devices, and reflectance of surrounding exterior and interior surfaces.
At present, there are several computational, graphical, and simulation methods to determine DF values and their components [73]. Various lighting simulation methods have also been proposed and validated with several tools; none of the methods are standardized. To calculate the alternatives to determine the required level of daylighting for different sizes of window (Figure 5), we used the numerical integration method for the sky component of DF, developed by Kittler et al. as Equation (2) [78,79,80].
The basic geometry for incidence of light beam on the examination plane is presented in Figure 5. The internal and external reflection components of DF can be calculated from the empirical relations for the mean and minimum reflection components of DF, as presented in Equations (3) and (4), respectively: where SW is window glass area (m2), S is space area (m2), ρD is light reflection coefficient on lower areas from windows axis (–), ρH is light reflection coefficient on upper areas from windows axis (–), ρT is light reflection coefficient from the terrain (–), ρ is average light reflection coefficient from all surfaces (–), and Z is angle of shadowing examined space by surrounding structures (degrees).

Optimization of energy consumptions in industrial buildings along with indoor environmental comfort for occupants is a crucial issue with considerations of new standards and regulations as well as energy costs. In this study, we investigated and analyzed efficiency and adequacy for integrated lighting in large industrial buildings with the aim to enhance indoor environmental quality and to satisfy the related standards. Emphasize was given to the use of daylighting to enhance the visual comfort of the examined industrial hall during daytime while saving energy. We observed that the daylighting in the examined knitting hall of the textile factory does not fulfill the required conditions in the entire working areas. In the points and locations that the values are below the required illumination magnitude, it is necessary to provide artificial lighting such as electrical lamps to supplement daylight to achieve the required levels.
The minimum required values of DF for the individual types of working activity were determined based on CSN 360020 national standard method. When the building designer does not have suitable computing method, it would be quite difficult to determine the required lighting area in the specific production plant. The investigated production area was very large, so it was necessary to calculate the DF values in many inspection points distributed in accordance with CSN 730580-1987 and CSN 730580-2000 standard methods. Design of the lighting system would meet the required DF at specific distances from the windows during day time. The measured values of daylight factor were found very close to the skylight component of the total illumination. The skylight component was observed on average 30% that of the measured daylight factor values. In designing the industrial buildings, the daylight is not emphasized and its contribution is usually small, but it is very important element for the workers psychology and physiology. The workers must feel a connection with the exterior environment; otherwise, their productivities decrease. We will report our further studies focusing on different orientations of windows and other influencing parameters as well as the visual comfort of workers and effects of natural lighting on their productivities in the future.

This paper was elaborated with financial support of the research project VEGA 1/0835/14 of Scientific Grant Agency, the Ministry of Education, Science, Research, and Sport of the Slovak Republic and the Slovak Academy of Sciences. The authors appreciate Bahareh Doroudiani of the University of Toronto, Physics Department for assisting in this work. 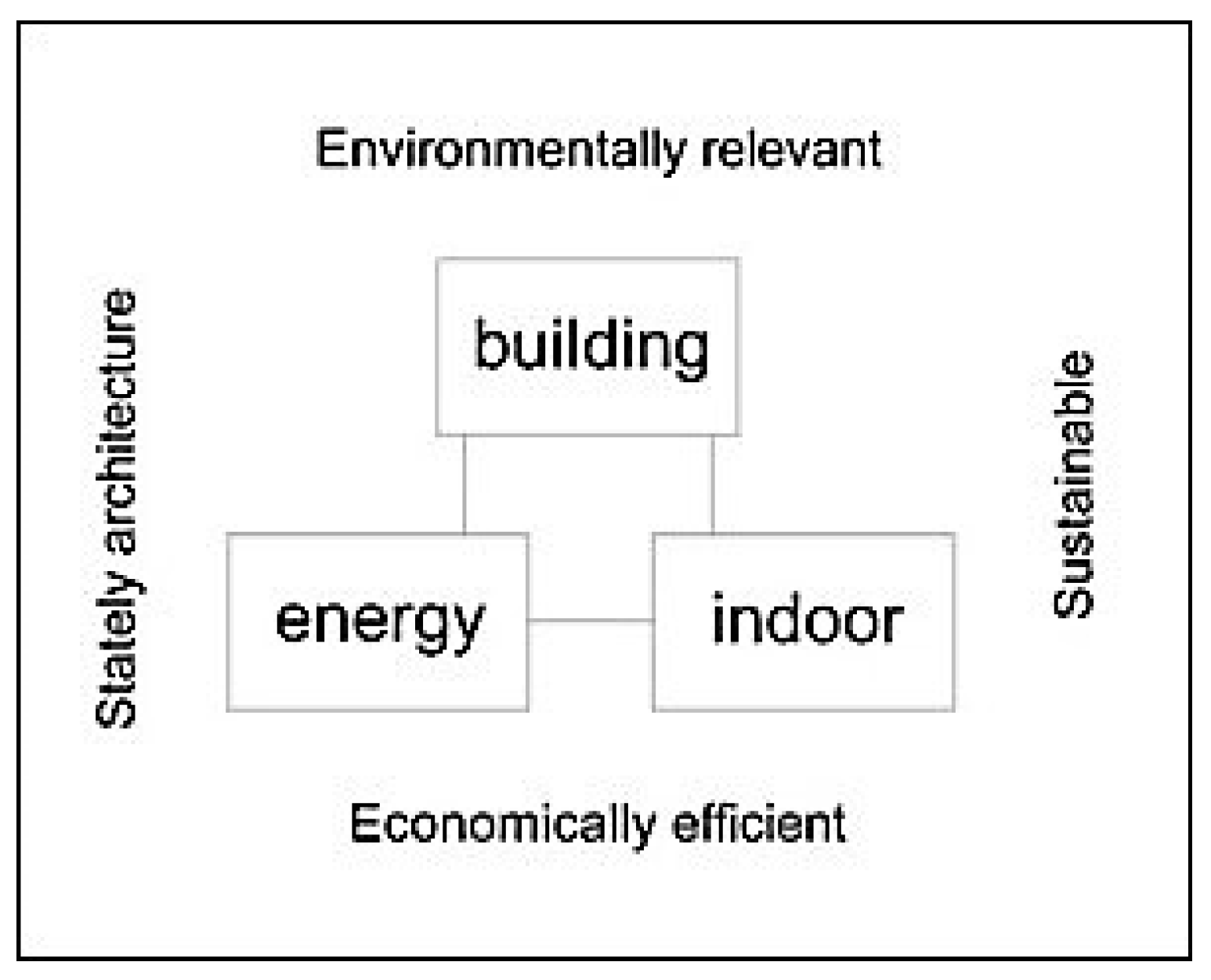 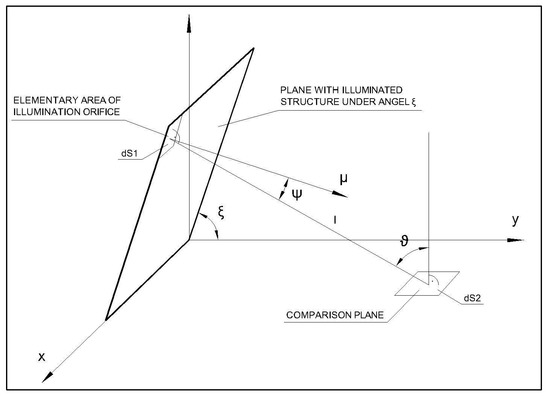 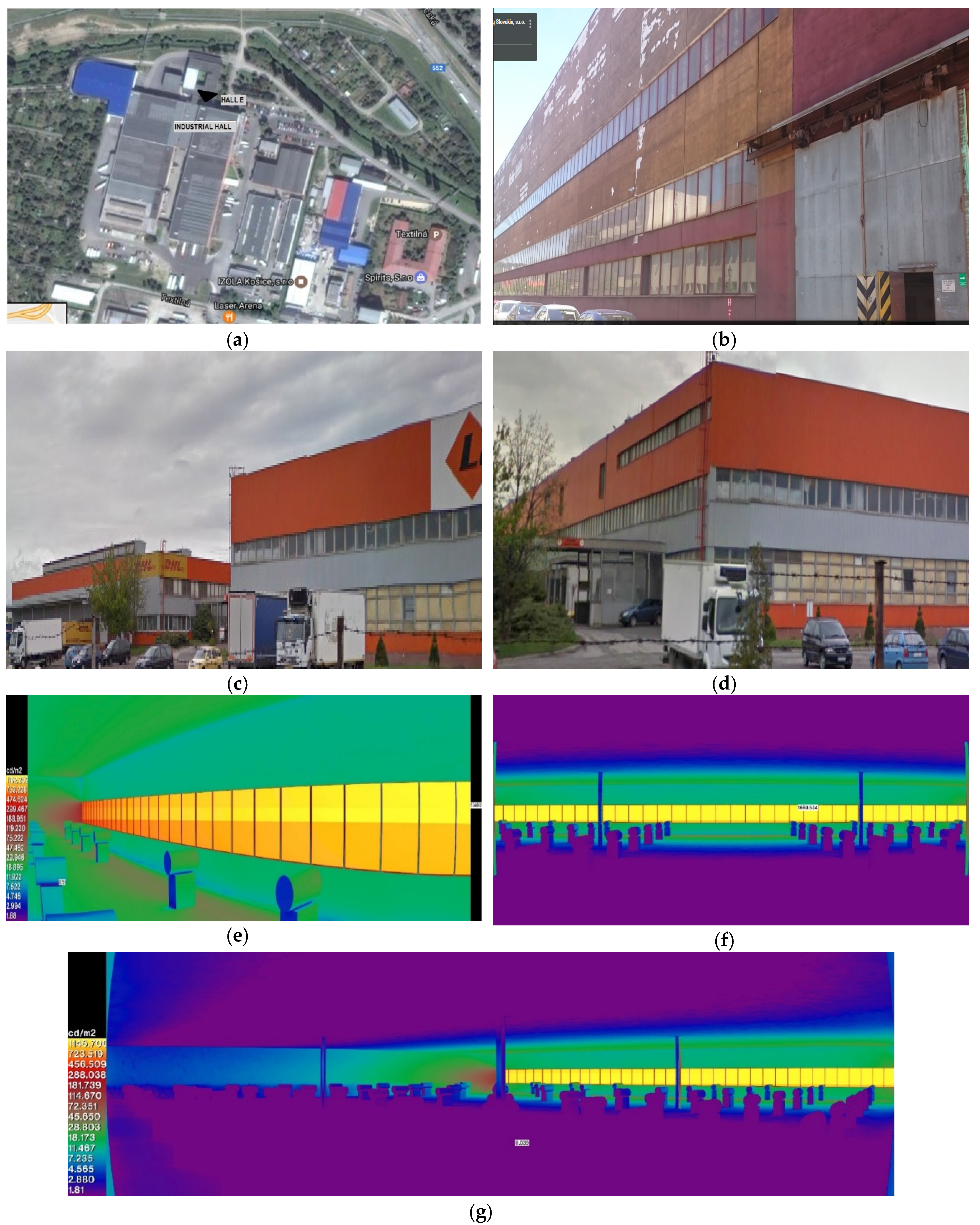 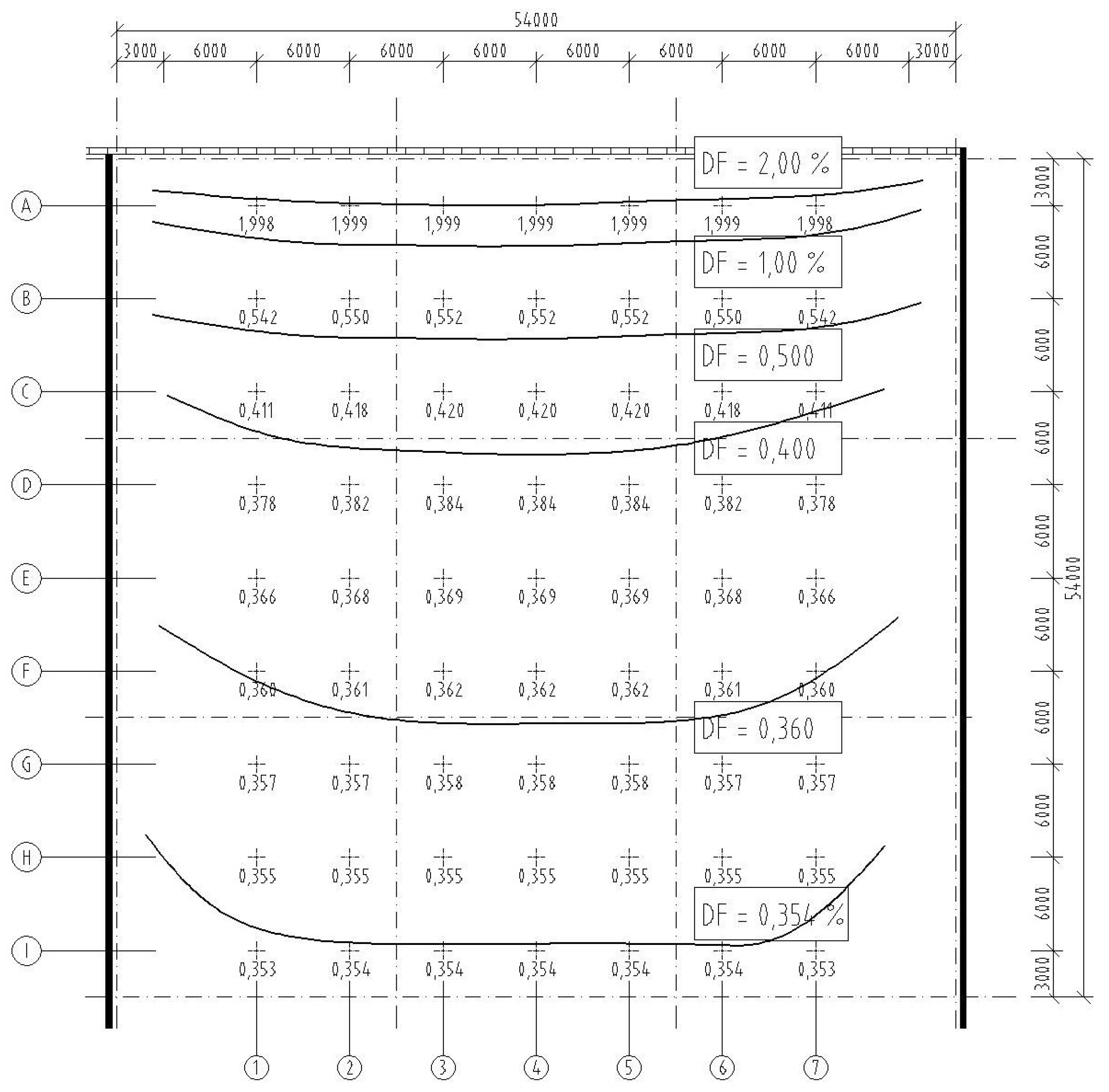 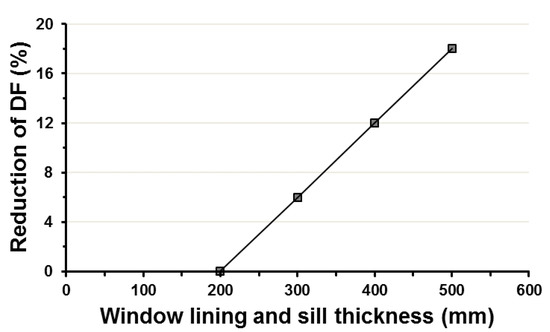 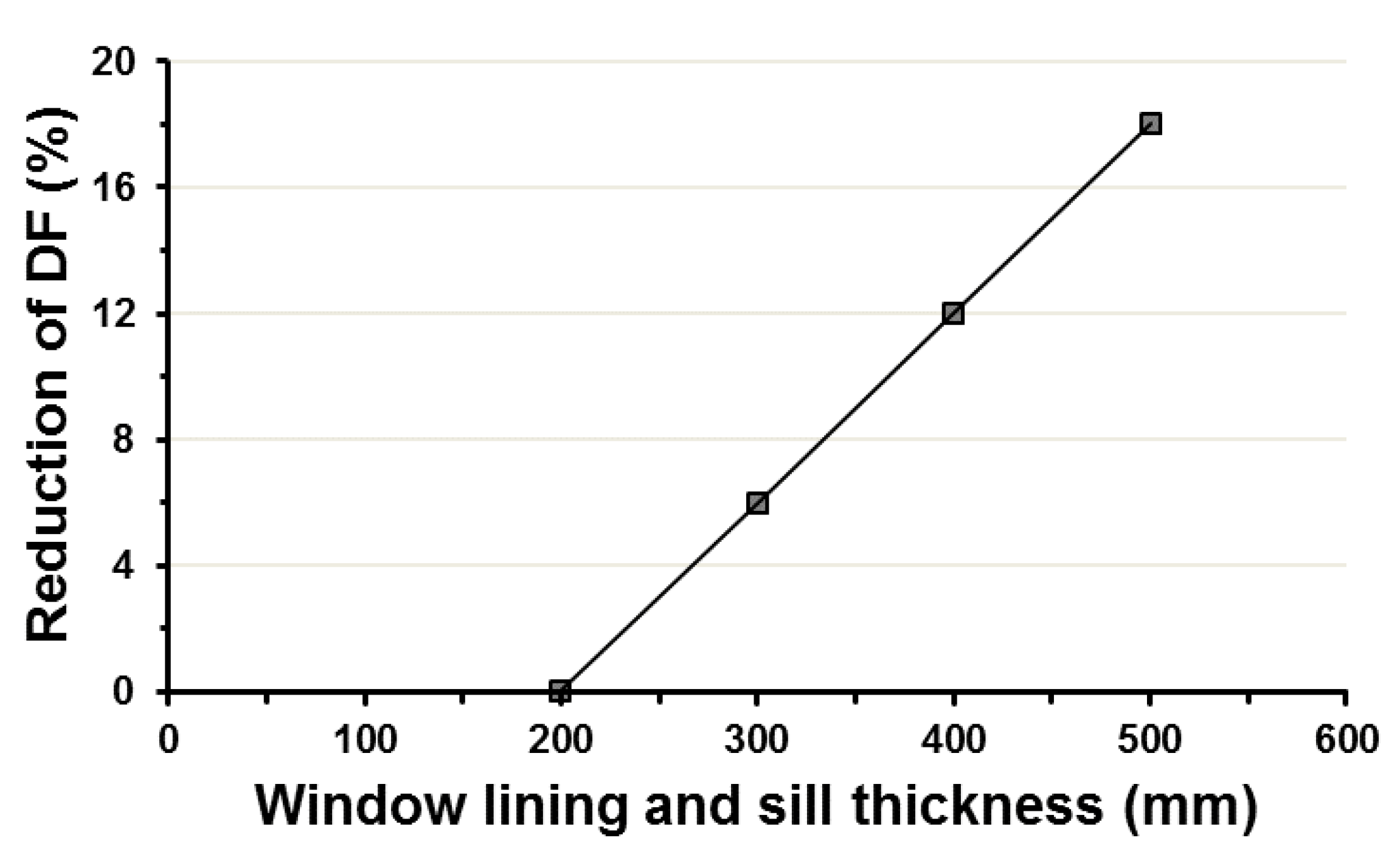 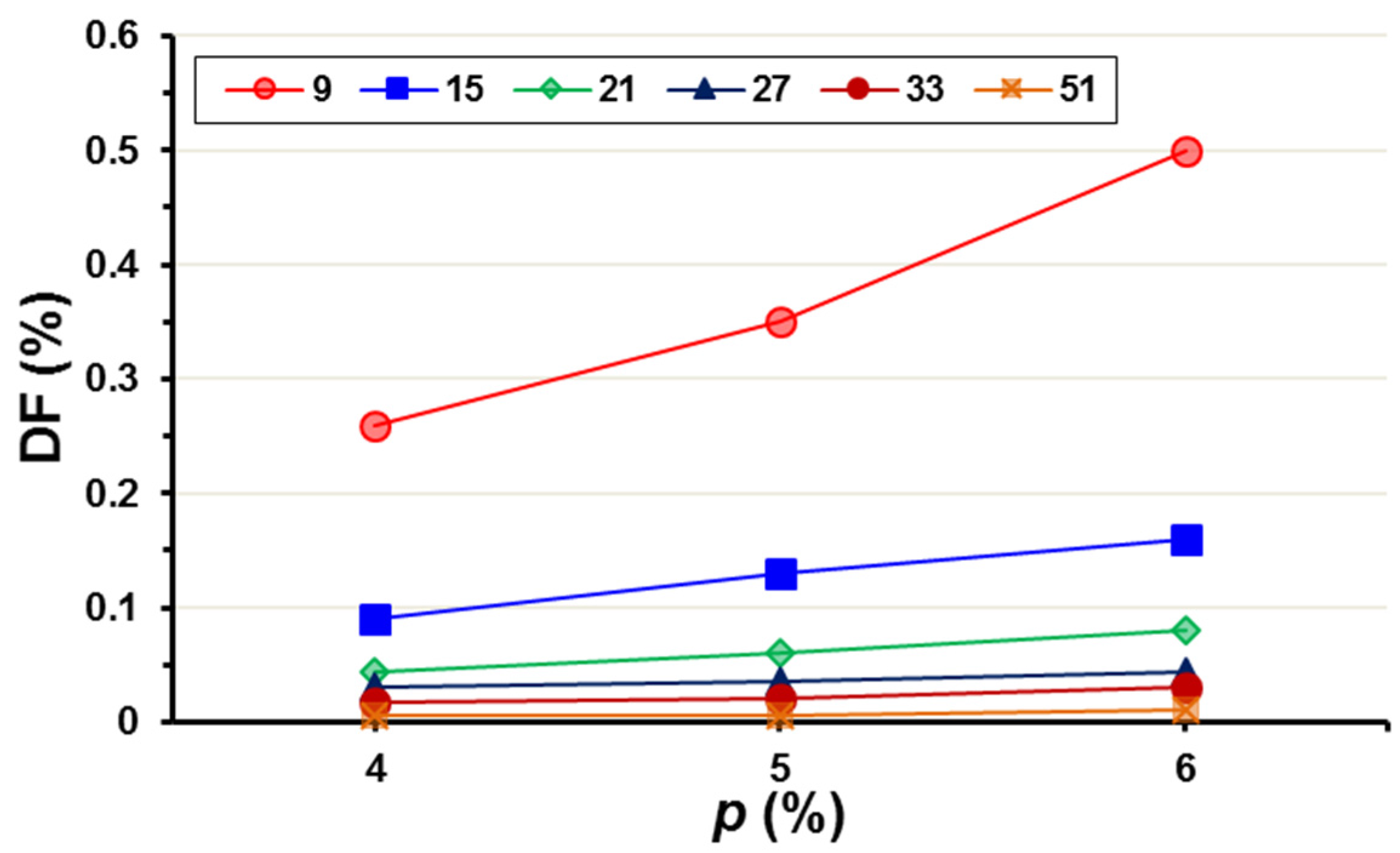