Liquation Cracking in the Heat-Affected Zone of IN738 Superalloy Weld

Copper (Cu) electroplating is a mature technology, and has been extensively applied in microelectronic industry. With the development of advanced microelectronic packaging, Cu electroplating encounters new challenges for atomic deposition on a non-planar substrate and to deliver good throwing power and uniform deposit properties in a high-aspect-ratio trench. The use of organic additives plays an important role in modulating the atomic deposition to achieve successful metallic coverage and filling, which strongly relies on the adsorptive and chemical interactions among additives on the surface of growing film. However, the adsorptive characteristic of organic additives inevitably results in an incorporation of additive-derived impurities in the electroplated Cu film. The incorporation of high-level impurities originating from the use of polyethylene glycol (PEG) and chlorine ions significantly affects the microstructural evolution of the electroplated Cu film, and the electroplated-Cu solder joints, leading to the formation of undesired voids at the joint interface. However, the addition of bis(3-sulfopropyl) disulfide (SPS) with a critical concentration suppresses the impurity incorporation and the void formation. In this article, relevant studies were reviewed, and the focus was placed on the effects of additive formula and plating parameters on the impurity incorporation in the electroplated Cu film, and the void formation in the solder joints. View Full-Text
Keywords: electroplating; copper; microstructure; void; impurity electroplating; copper; microstructure; void; impurity
►▼ Show Figures 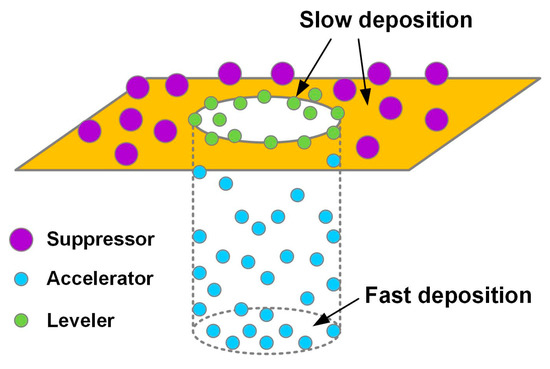