Fatigue of Thin, Oligo-Crystalline Wires Made of X2 CrNiMo 18-15-3
Previous Article in Journal

While Zr is frequently added to Al alloys to control grain size with the formation of large (>1 μm) primary precipitates, little research has been conducted on the effect of nanoscale Al3Zr precipitates on Al alloys. By comparing the precipitation and corresponding strength evolution between Al-Cu-Zr alloys with different Zr concentrations, the effects of Zr on Al-Cu precipitation with and without primary Al3Zr precipitates can be observed. In the absence of these large precipitates, all Al3Zr phases can be formed, through high temperature aging treatments, as a dispersion of nanoprecipaites inside the Al grains. In this study, Al-Cu-Zr ternary alloys were produced and heat treated to determine whether an increase in the coarsening resistance of Al-Cu precipitate phases would be observed with a distribution of the more thermally stable Al3Zr nanoprecipitates. Generally, properly aged Al-Cu alloys will coarsen when encountering elevated temperatures higher than ~473 K (~200 °C). Diluted Al-Zr alloys (<0.07 at % Zr) resist coarsening behavior until the significantly higher temperatures of ~673 K (~400 °C), but are comparatively limited in strength because of a limited solubility of Zr in the Al matrix. Hardness testing and transmission electron microscope (TEM) results are discussed, in which it is found that even very small additions of Zr, when properly accounted for during heat treating, produce a finer microstructure and higher strength than in similar Al-Cu binary alloys. No significant change in the thermal stability of strengthening was observed, indicating that the finer precipitate microstructure is resultant from a higher nucleation density, as opposed to a decrease in coarsening behavior. View Full-Text
Keywords: aluminum; zirconium; precipitation strengthening; thermal stability aluminum; zirconium; precipitation strengthening; thermal stability
►▼ Show Figures 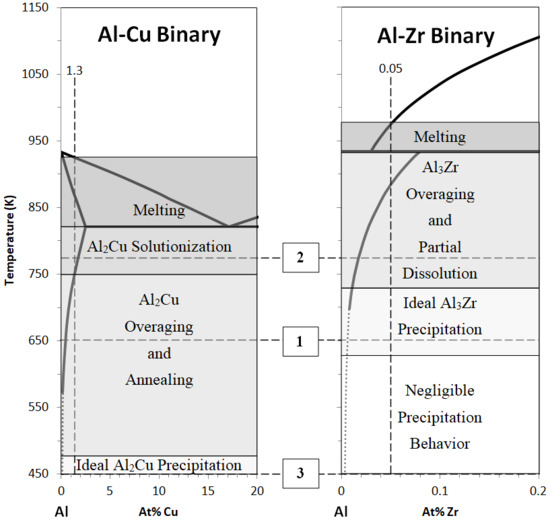