The precipitation-hardened Inconel 718 nickel-base superalloy has been widely used in the manufacturing of critical components in aircraft engines and land-based gas turbines, primarily due to the excellent mechanical properties at high temperatures as well as the extraordinary corrosion-oxidation resistance [1,2]. Due to the severe working conditions Inconel 718 alloys are usually subjected to, obtaining a defect-free part with appropriate microstructure is essential for reliability. Therefore, special attention must be paid to each step of the thermomechanical treatments. Hot-working operations are usually conducted above half the melting temperature for this alloy to achieve finished or semi-finished components with desired performance. However, the hot-working approach at high temperature usually results in complex localized deformation. In this case, the alloys will experience a softening process and the applied forming force is sensitive to processing parameters such as temperature and strain rate [3]. Recent studies show that the flow softening behavior is closely related to various special microstructure characteristics such as shear bands, the precipitation of second phase and strain localization [4,5,6], except for the well-known dynamic recrystallization (DRX) [7] and dynamic recovery (DRV) [8], wherein the propagation of shear band characterized by narrow bands is usually found during the high strain rate inelastic deformation process due to the intense shear straining. Once a shear band is initiated, it may become self-propagating because the intrinsic adiabatic heating produces a remarkable decrease of the local flow stress [9]. The shear band is a potentially dangerous factor for deformation and may result in localized deformation and local failure. It not only can significantly degrade the mechanical properties of alloys, but also can lead to the final failure of the component due to the shear-induced cracking. Therefore, a new insight of the flow characteristics at various deformation conditions during hot-working process is of great importance in controlling deformation, and contributing to obtain desirable components.
Up to now, many studies focused on the flow instability of alloys by means of isothermal uniaxial compression [10,11,12]. However, only few investigations primarily concerned with the flow behavior under the plane strain compression [13]. In the present study, the deformation behavior of Inconel 718 superalloy in generalized plane strain conditions subjected to pressure and elevated temperature is investigated and discussed. The effect of processing parameters on shear band propagation and unstable plastic was studied by analyzing the flow curves and microstructures. Furthermore, the finite element method (FEM) [14,15] was employed to interpret the occurrence and evolution of shear bands during the compression process. The present work for Inconel 718 superalloy yields important information for the optimizing of processing parameters and failure prediction under plane strain conditions.

The hot deformation behavior of Inconel 718 superalloy was investigated by means of plane strain compression in the present work. The received material was in the form of sheet with thickness of 8 mm, and the chemical composition (wt. %) of the alloy is shown in Table 1. Figure 1 shows the initial microstructure of the received sheet. Note that the sheet has a typical equiaxial microstructure containing twins (noted by black arrows). In order to obtain a microstructure with single γ phase, the sheet was solution treated before the testing of compression. Subsequently, rectangular specimens with dimension of 15 mm × 10 mm × 8 mm were cut by electro-discharge machining from the sheet. The compression tests were performed on a thermomechanical simulator at a temperature range of 900 °C to 1050 °C and at strain rates from 0.001 s−1 to 10 s−1. Specimens were heat treated with a heating rate of 10 °C/s and held at testing temperature for 5 min prior to mechanical testing. The true stress–true strain curves were calculated from the obtained loading–displacement data. In order to evaluate the microstructure evolution at specific temperatures and strain rates during the deformation process, the specimens were air cooled immediately after being compressed to a strain of 0.8. The deformed specimens were sectioned along the length of themselves with a direction parallel to the compression axis. In order to characterize the morphologies of shear bands, the optical microscope (OM) was employed for the microstructure observations.

The measured true stress–true strain curves are presented in Figure 2. As shown in Figure 2, the flow stress is sensitive to the temperature and strain rate. When the alloy is deformed at 10 s−1, an abnormal softening phenomenon caused by adiabatic heating is observed. However, only slight softening can be detected at other conditions, even if the deformation was carried out under the lowest strain rate (10−3 s−1) and highest temperatures (1050 °C). It is well-known that DRX intensively occurs in the hot deformation process of Ni-based alloys, resulting in dynamic softening of the alloys and continuous decreasing of the flow strength. The slight softening of the alloy can be explained by the variation of the DRX mechanism [11,16,17,18]. At high strain rates or low deformation temperatures, discontinuous DRX (DDRX) occurs, resulting in obviously softening. Besides, the continuous DRX (CDRX) prefers to initiate and thus leads to slight softening, when deforming at low strain rate and high temperature conditions. For the flow curves, the synergic effect of the two DRX mechanisms reduces the corresponding flow stress from approximately 650 MPa at 10 s−1 to 200 MPa at 10−3 s−1 in Figure 2a. Similarly in Figure 2b the flow stresses reduces from 275 MPa at 900 °C to 100 MPa at 1050 °C.

The etched microstructures of the specimens are shown in Figure 3, from which the shear bands and strain localization regions under different deformation conditions can be seen as dark-colored regions. It can be concluded that the shear bands exhibit approximate “S” shape which passes totally through the entire width of the sample under “severe” conditions (low temperatures and high strain rate, e.g., 900 °C/10 s−1 shown in Figure 3a). Note that the samples were asymmetrically deformed under these severe conditions. It must be confirmed that the parallelism of the Gleeble anvils and the samples was controlled below 0.01 mm. Therefore, the asymmetry of deformation cannot result from the deviation between contact surfaces and the compression axis. Note that the samples asymmetrically deformed under these severe conditions result from the intrinsic mechanism.
When the samples were compressed at “intermediate” conditions (high temperature or low strain rate), as shown in Figure 3b, the shear bands broadened and evolved into a form with “X” shape.
When the compression was performed at “mild” conditions (high temperature and low strain rate), as shown in Figure 3c,d, the shear bands significantly weakened and even disappeared. Especially, a homogeneous microstructure was obtained throughout the entire deformation region for the condition of 1050 °C /10−3 s−1 (as shown in Figure 3d).
According to the above observations and analysis, a qualitative rating of the degree of strain localization can be obtained and is summarized in Table 2. For the present alloy, the general trend is that the degree of strain localization increases with the increasing of strain rate and decreasing of temperature. However, the role of strain rate is great than deformation temperature.

As it has been clarified in Section 3.2, the severe deformation conditions tend to produce “S” type shear bands, while the intermediate deformation conditions prefer to induce “X” type shear bands. Note that both microstructure observations (Figure 3) and FEM simulations (Section 3.3) suggest that the morphology of shear bands at the initial stage exhibits “X” type with two crossed branches, as illustrated in Figure 7. It can be confirmed that the strength of the two branches is not exactly the same—one is “stronger” and the other one is “weaker”. The final shape of these shear bands depends on deformation conditions, interfacial friction and material properties. The evolution process is interpreted in a phenomenological way as follows.

(i)
In the case of high strain rate and low temperature, one of the two branches becomes stronger, weakening the second branch. It is due to the difference of deformation-induced heating (as shown in Figure 7a) and the nonuniform of instantaneous friction. With further compression, the interaction of adiabatic heating and strain, together with the increasing of interfacial friction, promotes the propagation of the stronger branch. Since the occurrence of shear bands are associated with material elements, their directions will rotate away from the compression axis once they initiated from the deformed region. Thus, the initial shear angle will increase, and leads to the formation of an asymmetrical specimen (Figure 3a and Figure 7a) finally.
(ii)
In the case of intermediate deformation, the deformation-induced heating can be neglected due to the much lower strain rates, and thus it is no longer the key factor to determine the evolution of shear bands. Therefore, the interfacial friction (f) and inherent material property, i.e., the positive strain rate sensitivity (m), are expected to control the formation of shear bands.

As shown above, the two branches of the initial shear band are not exactly the same. They both form at the same time, however the rate along one of these branches is higher and sometimes it changes. Once the rate in one of the branches is larger, it will be strengthened due to the positive m values and then the rate will decrease. As the rates are similar along the two bands, the X-type of shear band will form. Then the deformation resistance of the former branch becomes larger than the latter one. As a result, the inhomogeneous deformation will transform from the stronger branch to the weaker one. Owing to this alternate “strengthening–relaxation” effect, the two branches develop simultaneously, and form a stable “X” type shear band. As the compressing proceeds, the intersecting shear straining leads to the formation of regions with round strain rate in the center area of the compressed specimens.

(iii)
In the case of high temperature and low strain rate, no shear bands can be found macroscopically. Even if unstable flow occurs, the “strengthening–relaxation” effect mentioned above can suppress the development of inhomogeneous deformation owing to the higher m values. Thus, homogenous microstructure can be obtained throughout the entire deformed region, as illustrated in Figure 7c. 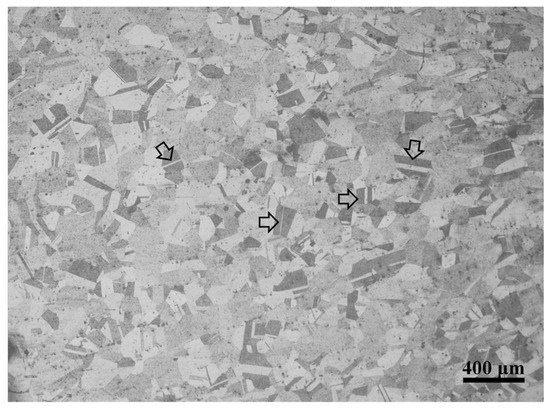