UNS S32205 duplex stainless steel plates with a thickness of 3 mm are arc stud welded by M8 × 40 mm AISI 304 austenitic stainless steel studs with constant stud lifts in order to investigate the effects of welding arc voltages on mechanical and microstructural behaviors of the joints. As the welding arc voltage increases starting from 140 V, the tensile strength of the weldment also increases but the higher arc values results in more spatters around the weld seam up to 180 V. Conversely, the lower arc voltages causes poor tensile strength values to weldments. Tensile tests proved that all of the samples are split from each other in the welding zone but deformation occurs in duplex plates during the tensile testing of weldments so that the elongation values are not practically notable. The satisfactory tensile strength and bending values are determined by applying 180 volts of welding arc voltage according to ISO 14555 standard. Peak values of micro hardness occurred in weld metal most probably as a consequence of increasing heat input decreasing the delta ferrite ratios. As the arc voltage increases, the width of the heat affected zone increases. Coarsening of delta-ferrite and austenite grains was observed in the weld metal peak temperature zone but it especially becomes visible closer to the duplex side in all samples. The large voids and unwelded zones up to approximately 1 mm by length are observed by macro-structure inspections. Besides visual tests and micro-structural surveys; bending and microhardness tests with radiographic inspection were applied to samples for maintaining the correct welding parameters in obtaining well-qualified weldments of these two distinct groups of stainless steel materials. View Full-Text
Keywords: arc stud welding; duplex stainless steels; austenitic stainless steels arc stud welding; duplex stainless steels; austenitic stainless steels
►▼ Show Figures 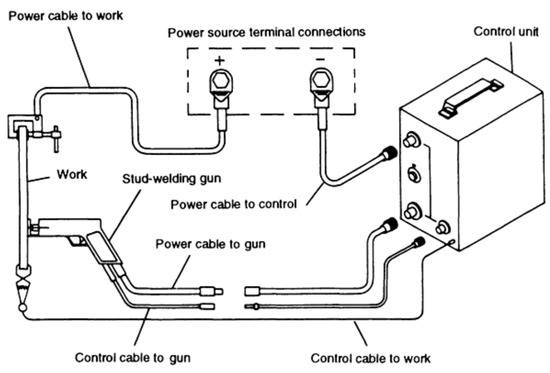