Duplex stainless steels contain more than 19% chromium and have more than 30% of both ferrite and austenite. They were first invented in the early part of the 20th century, but it was not until the 1970s, with the introduction of AOD (argon-oxygen decarburization) melting and recognition of the benefits of nitrogen additions, that duplex stainless steels became attractive for widespread industrial use.
Modern duplex stainless steels contain approximately 50/50 austenite and ferrite in their microstructure, and they combine the high strength of ferrite with the ductility and toughness of the austenite. The addition of nitrogen enables better equi-partitioning of elements between the two phases, higher strength in the austenite, better corrosion resistance, and improved weldability, to name but a few benefits [1,2]. These alloys are metallurgically engineered to optimise properties. Computational thermodynamics has been very successfully used by steelmakers to establish the relationship between bulk composition, heat treatment temperature, phase equilibria, elemental partitioning between the phases and precipitation kinetics of these steels [3,4,5]. As such, this tool enables the optimisation of composition, thermomechanical processing, microstructure, mechanical properties and likely localised corrosion resistance of these grades.
The commonly used duplex stainless steels have good corrosion resistance in a wide range of environments and excellent resistance to stress corrosion cracking (SCC) [6,7]. Their high strength and hardness also give them good resistance to erosion corrosion [8], cavitation [9] and corrosion fatigue [9]. There are also cast versions of many of the duplex compositions and these have seen extensive use for pumps, valves and other equipment. So, these alloys offer a very attractive range of properties to engineers and are readily available in a wide range of product forms.
Duplex stainless steels have been adopted by many industries to varying degrees. They are widely used in the oil and gas, chemical process, marine, power, pulp and paper, pollution control, mineral processing, and civil and structural engineering industries.
Duplex stainless steels also have good resistance to atmospheric corrosion, and they have been used for a range of applications instead of carbon steel, because they need no painting or significant maintenance in aggressive atmospheres [9]. Their high strength means that thickness savings are possible and duplex stainless steels can be cost-effective compared with painted carbon steel on a life cycle cost basis [9], as is discussed in more detail in Section 5.4.

The minimum mechanical properties at room temperature of some common wrought austenitic and duplex stainless steels are shown in Table 3. The mechanical properties of the three lean duplex alloys, 2101, 2102 and 2202, shown in Table 1, are the same. It can be seen that the wrought duplex stainless steels are significantly stronger than their austenitic counterparts.
The high strength of duplex stainless steels is reflected in the high design stresses for both vessels and pipes. This means that there is scope for wall thickness savings with duplex alloys, particularly at higher temperatures and pressures. This can also result in savings in fabrication time and cost.
The duplex castings are also substantially stronger than the cast austenitic alloys. This means there is scope for significant wall thickness and hence weight savings as with wrought alloys, although this is curtailed somewhat by the need for sufficient thickness for liquid metal to flow freely through and fill the mold. However, in the case of the offshore oil and gas industry the reduction of equipment weight on the platform has been a significant driver towards the use of duplex stainless steels. Duplex castings are also much more resistant to hot tearing than are fully austenitic castings, and therefore much easier and less expensive to produce.
Minimum and maximum operating temperatures are defined in design codes such as EN 10028-7 [35]. These limits are set to avoid brittle fracture as a consequence of loss of toughness due to the precipitation of alpha prime with long term exposure to temperatures above 280 °C, and by a ductile to brittle impact transition temperature of about −50 °C. This behaviour is well known for 22%Cr and 25%Cr grades but the limits are perhaps less well known for lean duplex grades. However, because the toughness of duplex stainless steels can be expected to fall with increasing thickness, codes also limit thickness to a maximum of 50 mm to 75 mm [36]. In special cases heavier thicknesses may be used on the basis of a favourable fracture mechanics analysis.
Wiesner [37] has considered the toughness requirements to avoid brittle fracture of duplex stainless steels in both the as-delivered and as-welded conditions. He concluded that a duplex stainless-steel structure with an impact energy of at least 40 J at the minimum design temperature is sufficient to avoid brittle fracture. More recently, Groth et al. [38] have shown that the codes may be over conservative for lean, standard and superduplex grades. Indeed, the oil and gas industry has a long history of the use of duplex stainless with toughness requirements of 45 J minimum at −46 °C. Under certain operating conditions in subsea applications the possibility of Joule–Thompson cooling can cause temperatures as low as −70 °C to prevail. In this case meeting the heat affected zone (HAZ) toughness requirements in forged API weld neck and swivel ring flanges has been problematical [39]. The HAZ of duplex welds has the lowest toughness, but special manufacturing procedures for these forgings have now resulted in the successful use of superduplex stainless steels for this application [40]. In this case, superduplex was used in place of alloy 625 (UNS N06625) at about one fifth of the cost.

The duplex stainless steels require care in welding, but there are many experienced fabricators because of the alloys’ widespread use in the oil and gas industry. When welding it is essential to begin with material that is properly solution heat treated and free from intermetallic phases. During welding, it not always possible to completely avoid the precipitation of intermetallic phases, so it is necessary to use welding parameters that minimize their precipitation in the weld metal and HAZ, as these will reduce toughness and corrosion resistance. The welding of duplex stainless steels and the additional tests required over and above those in ASME IX that are considered necessary to evaluate the quality of the microstructure are discussed by Francis [9] and ISO 17781 [17]. Quite low levels of intermetallic phase precipitation are known to significantly reduce corrosion resistance [41] and toughness [42]. There is no specific volume fraction of sigma phase that is defined as acceptable in a weld/HAZ in ISO 17781, because of the difficulty in easily establishing and measuring the presence of low levels of intermetallic phases using the light microscope [43]. If a joint is suspected of containing low levels of intermetallic phase, then passing corrosion test and impact test requirements shows the joint can be considered acceptable irrespective of the microstructural appearance [44,45]. Nevertheless, overall, microstructural evaluations remain an essential tool in diagnosing the root cause of any problems and greatly assist in determining any remedial action should problems arise. Welded joints are almost always used in the “as welded” condition as stress relief heat treatment can cause the precipitation of a phase known as alpha prime that can embrittle the joint. There are a number of ways of enhancing the performance of these welds. The importance of post-weld cleanup and the use of nitrogen-containing gases to improve weld corrosion resistance has been discussed by Gunn [46] and Francis [9].

In the sections below, the resistance of duplex alloys to corrosion in some specific service fluids is discussed, using as examples, marine, heat exchangers, the chemical and process industries, and atmospheric exposure. For details of the use of duplex stainless steels in other industries, the reader is referred to Francis [9].

Many plants operate close to the sea and the atmosphere can be extremely corrosive, particularly in warmer latitudes [70,71]. These can be class C5 or CX using the ISO 9223 designation [72]. Duplex stainless steels offer superior corrosion resistance to 316L austenitic stainless steel in such environments [70,71]. Francis discusses a number of applications of 2205 duplex for bridges in the tropics, such as the Stonecutters Bridge in Hong Kong and the Marina Bay Bridge in Singapore (Figure 19) [9].
Although carbon steel was an option, it would have required a very high-quality coating system plus regular inspection and repair. Duplex stainless steel offered a significantly lower through-life cost, because of the minimal maintenance. In less aggressive atmospheres lean duplex stainless steels have been used for bridges and for storage tanks holding less aggressive chemicals [73]. The advantage of lean duplex compared with steel is that it requires no painting, while it is stronger than 316lL, offering savings by reducing the cross section.
One area that requires care is when duplex or superduplex pipes are carrying hot process fluids and may get splashed with seawater, such as offshore platforms. A salt crust can build up and cracking may occur in the concentrated solution beneath the crust. There was a failure of a 2205 vessel at about 100 °C, which initiated a lot of research [74]. Although cracking could be induced in the laboratory on duplex pipes at high stresses and temperatures below 100 °C, failures, even on hotter pipes, were not reported [9]. The reason for this is that the drip rate of seawater is critical. If it is too fast, a salt crust never forms, while if it is too slow, the bottom of the crust dries out and the metal is no longer wetted. The Norwegian NORSOK standard [16] requires that 2205 and superduplex pipes operating above 100 °C and 110 °C, respectively have a protective coating. The most common protective coating is thermally sprayed aluminium, but high temperature polymers can be considered. Since the NORSOK regulations were introduced, there have not been any major failures of hot duplex process lines due to external SCC.

Both authors, G.B. and R.F., contributed to the conceptualization and writing of this review paper. All authors have read and agreed to the published version of the manuscript.

All of the data presented in this paper is available in literature in the public domain as cited in the references.

The authors would like to thank Rolled Alloys, Outokumpu Stainless AB and Steve Clarke for permission to use their photos and data in the compilation of this paper. 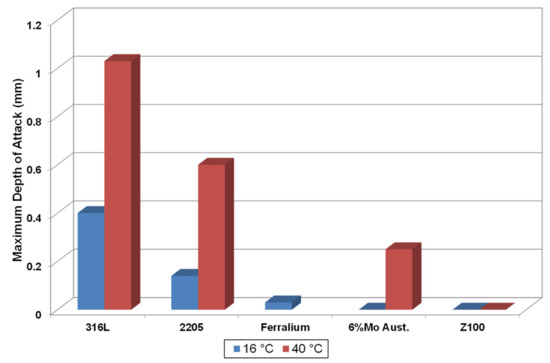 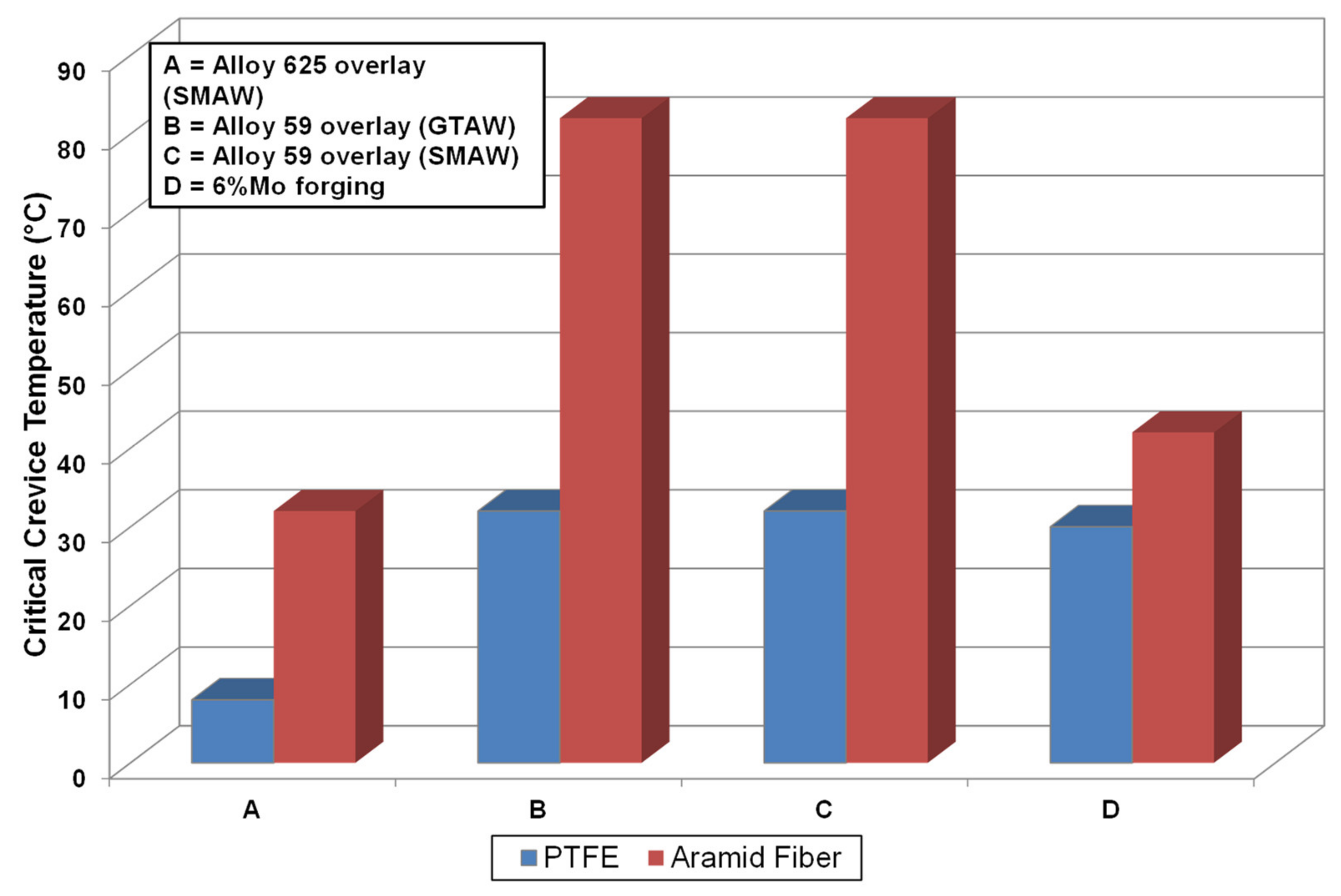 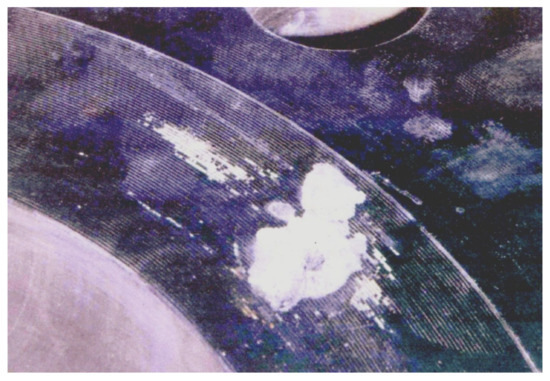 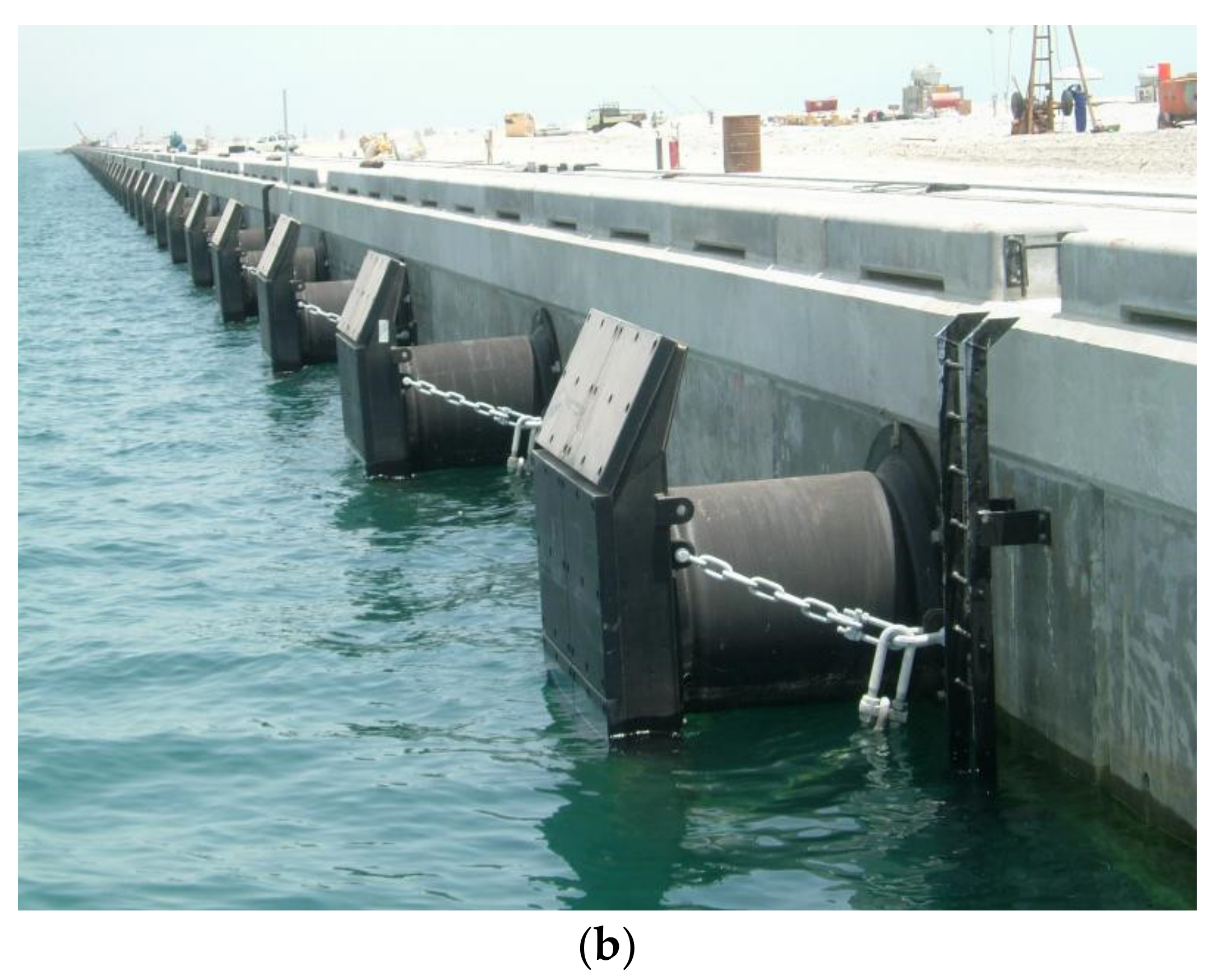 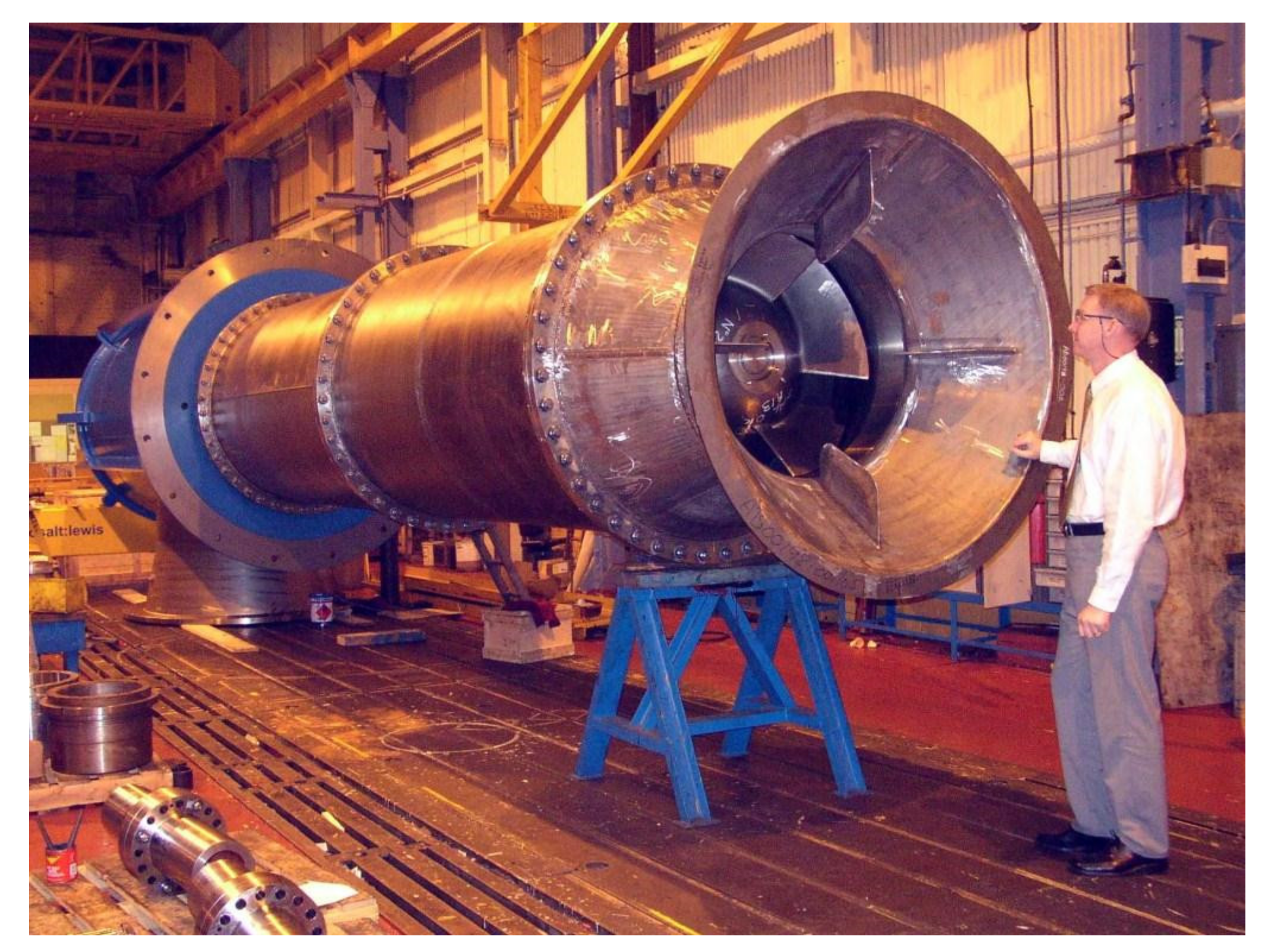 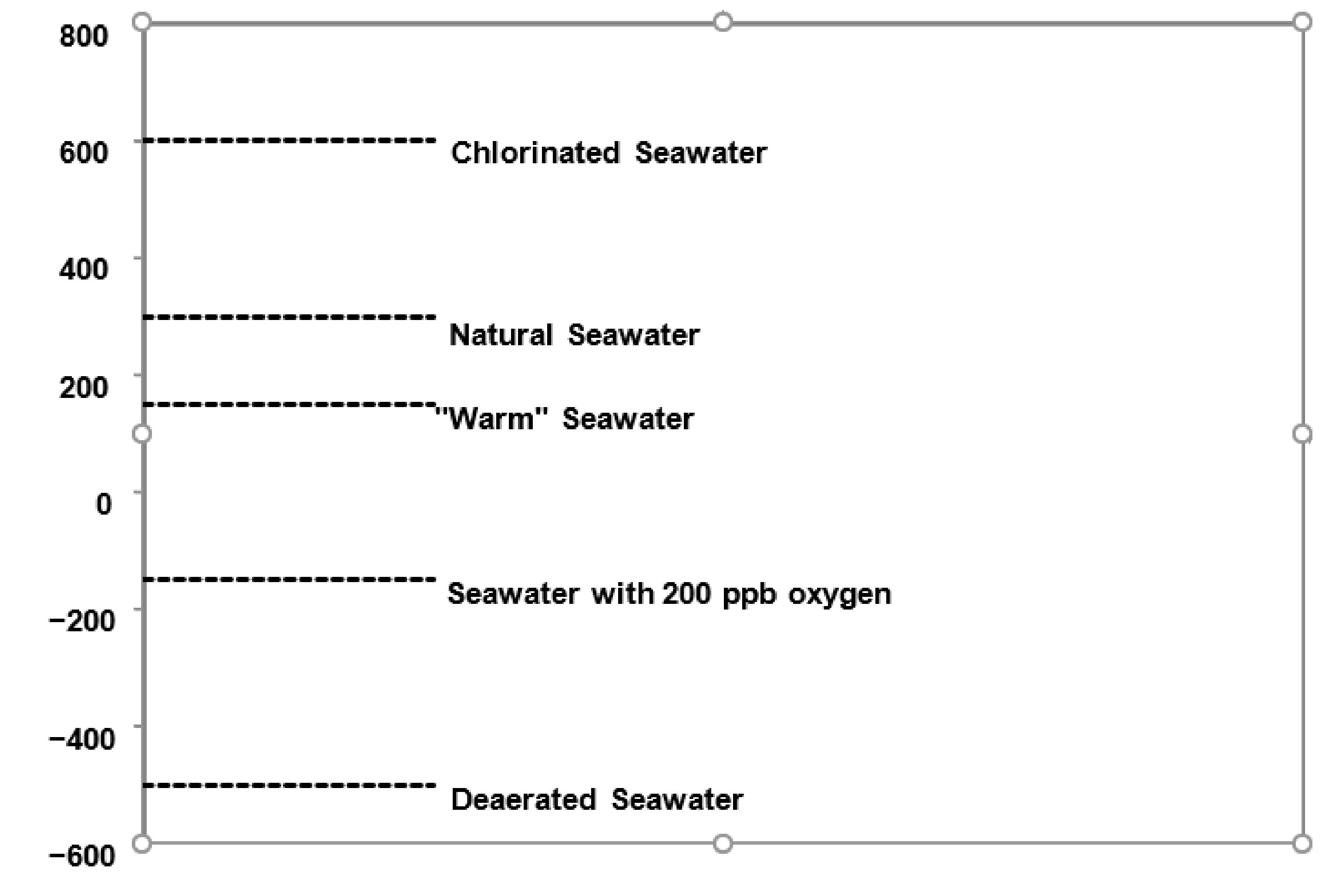 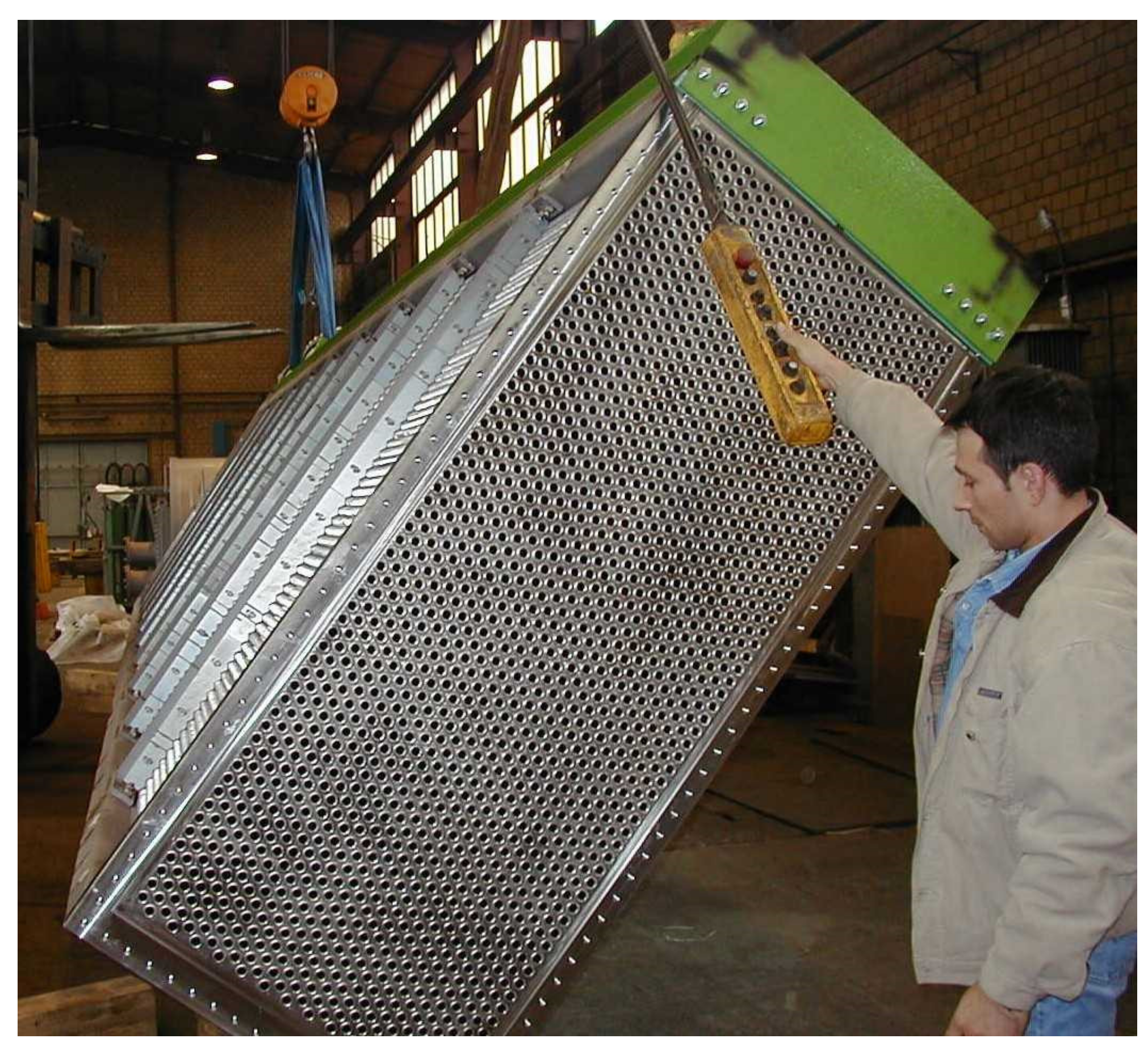 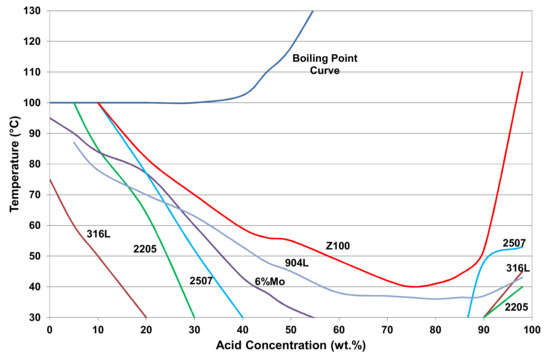 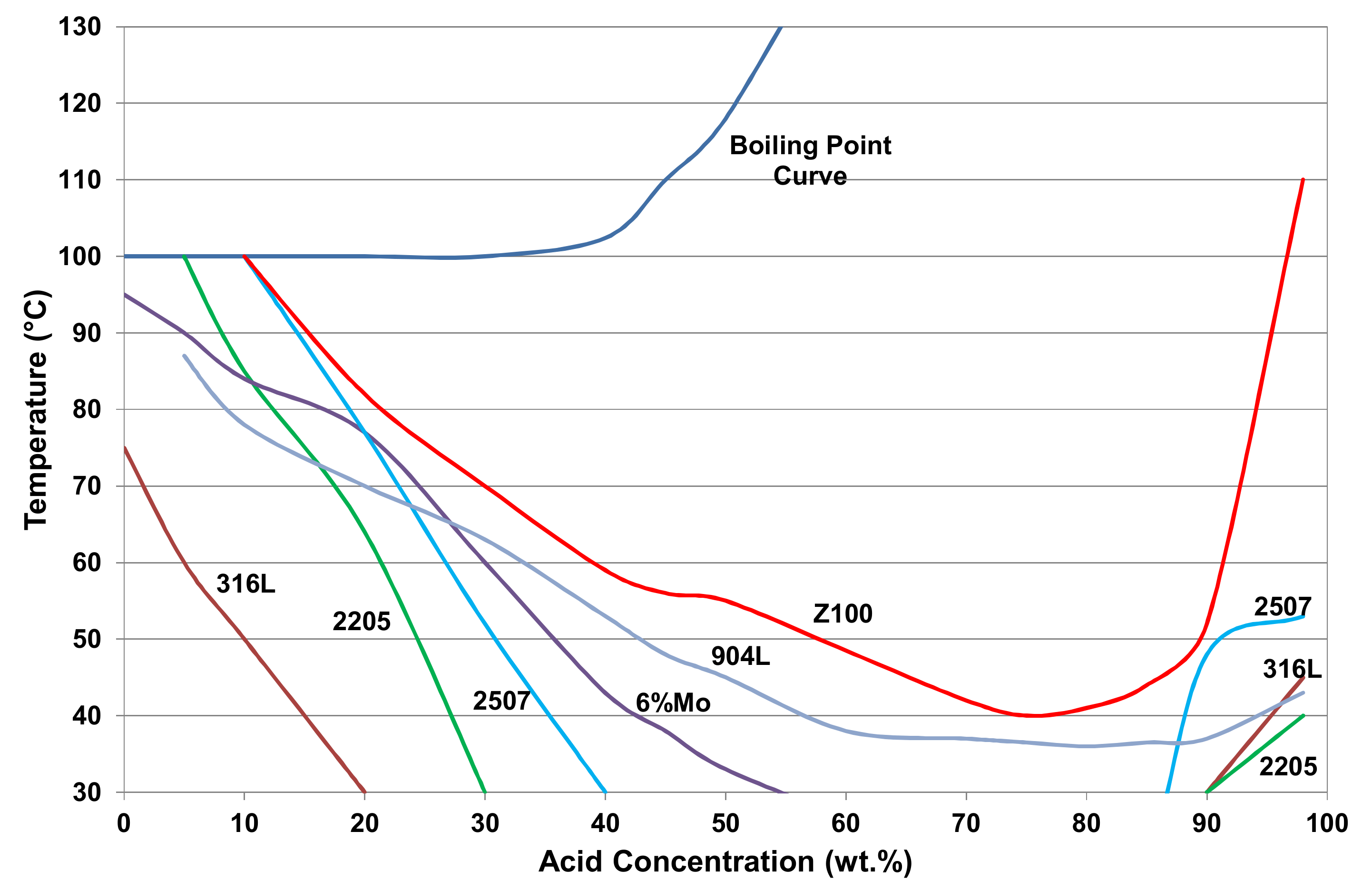 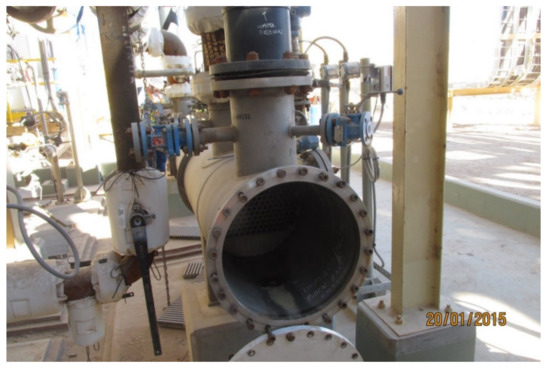 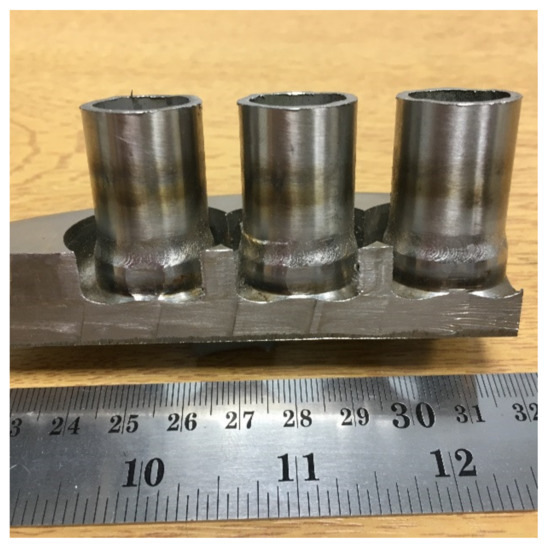 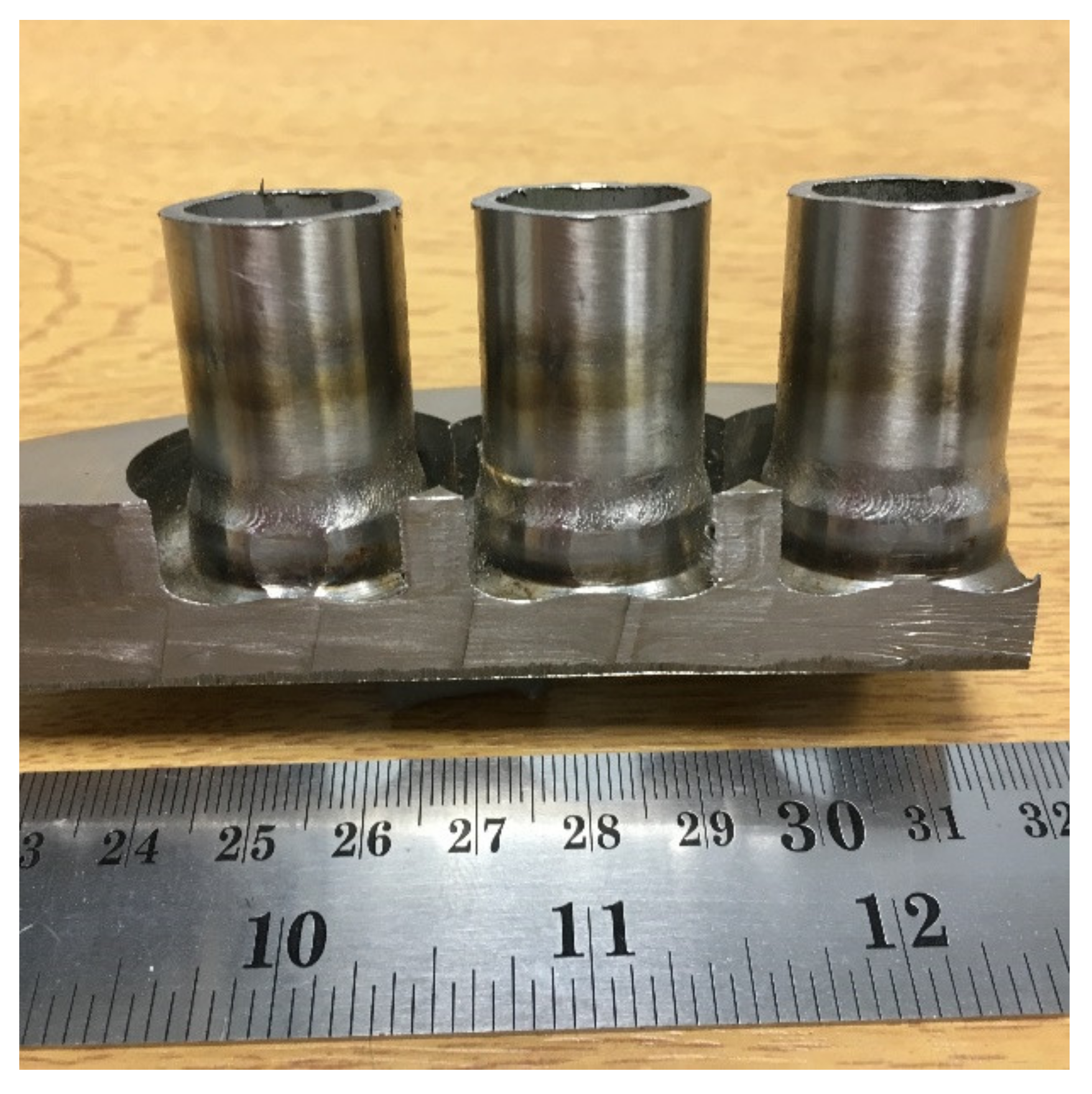 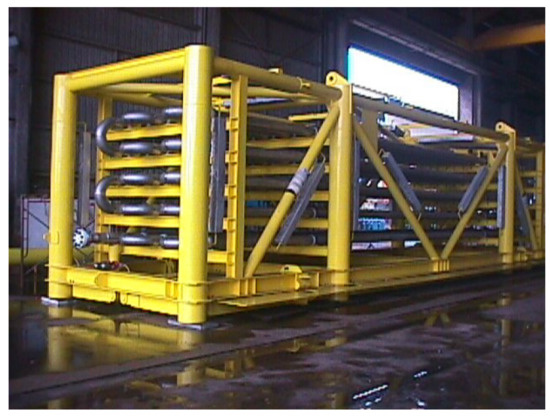 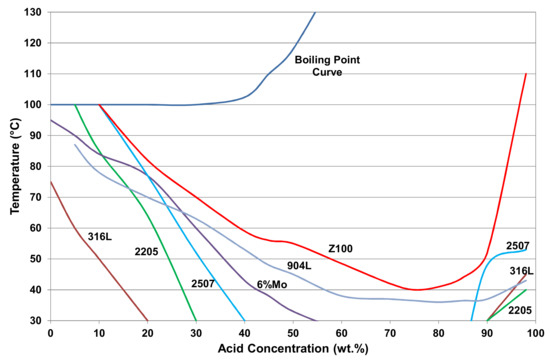 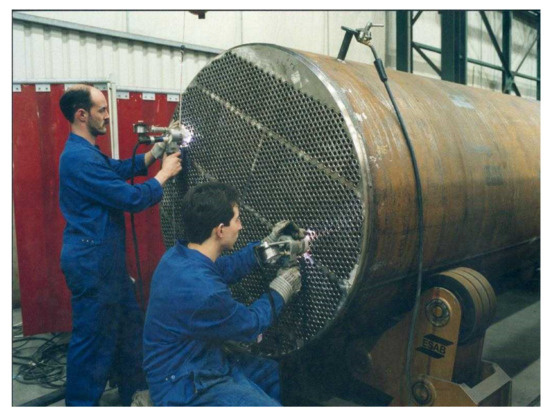 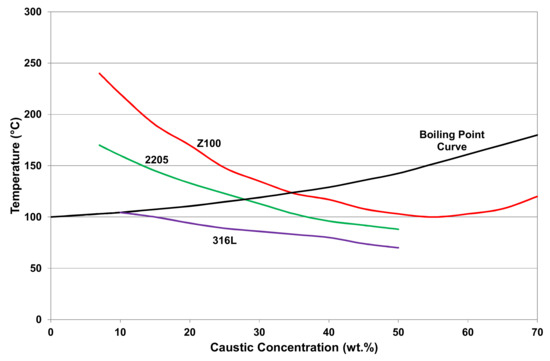 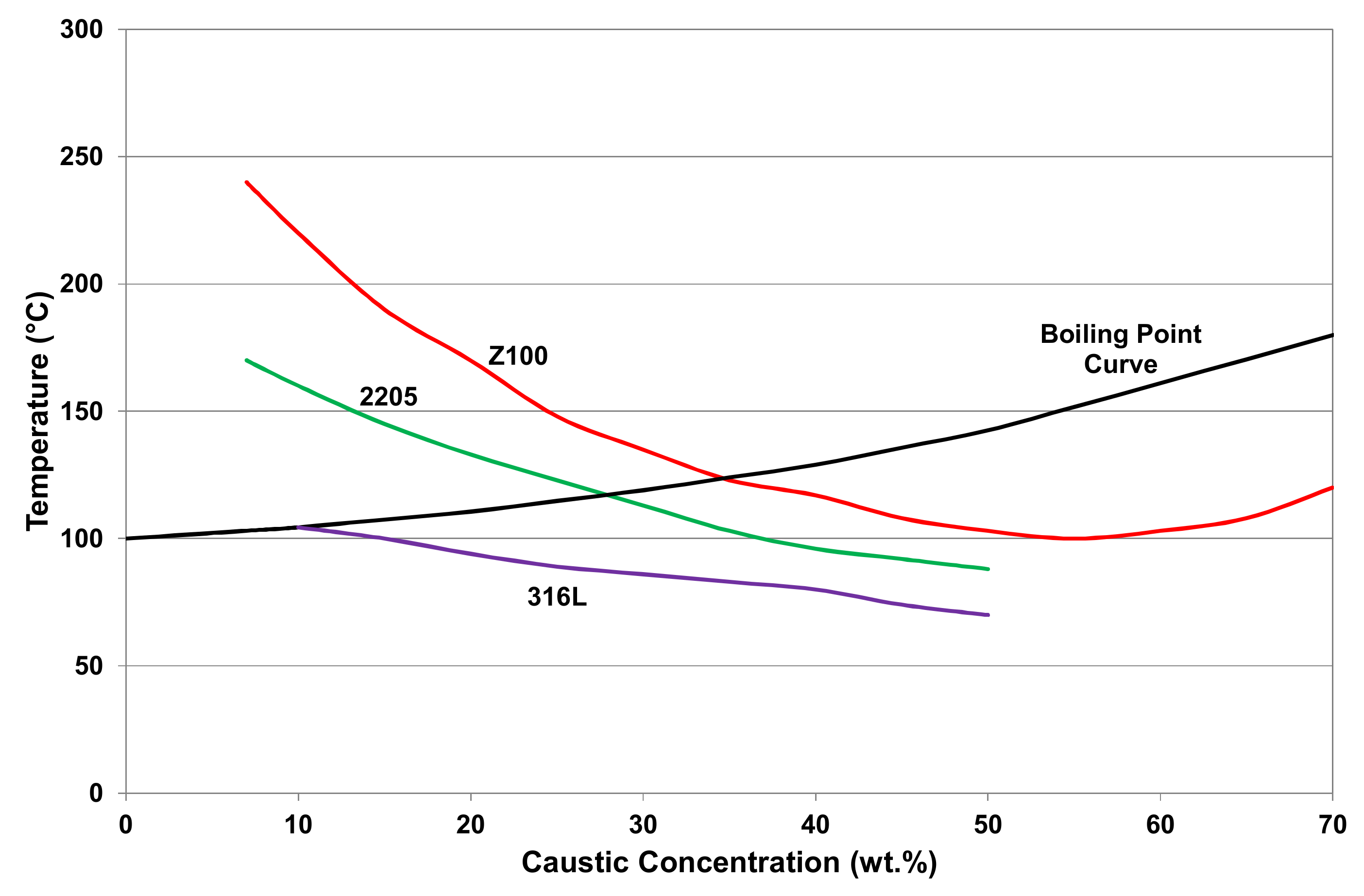 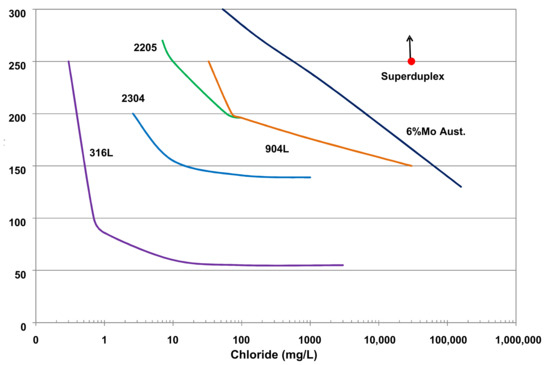 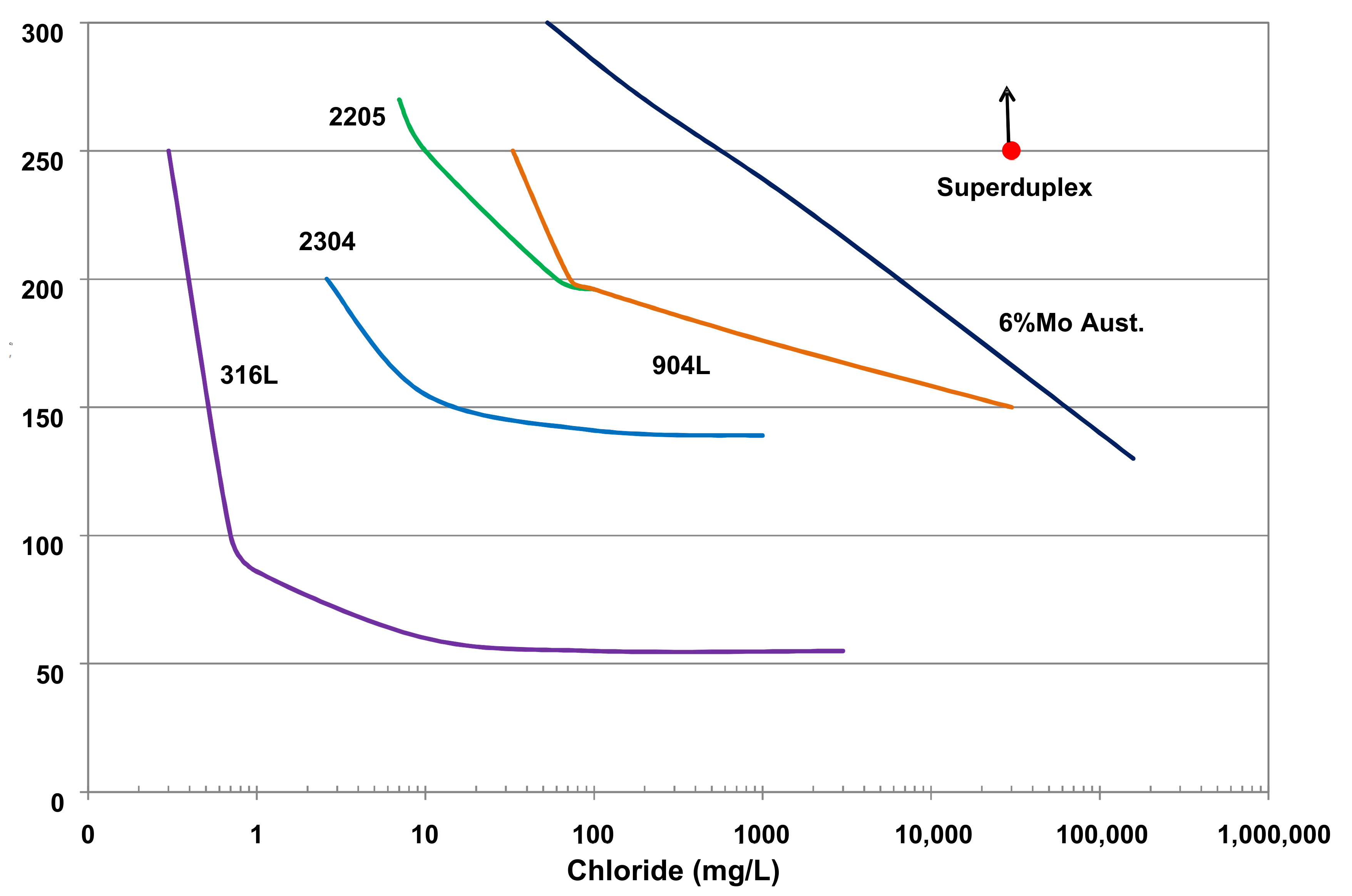 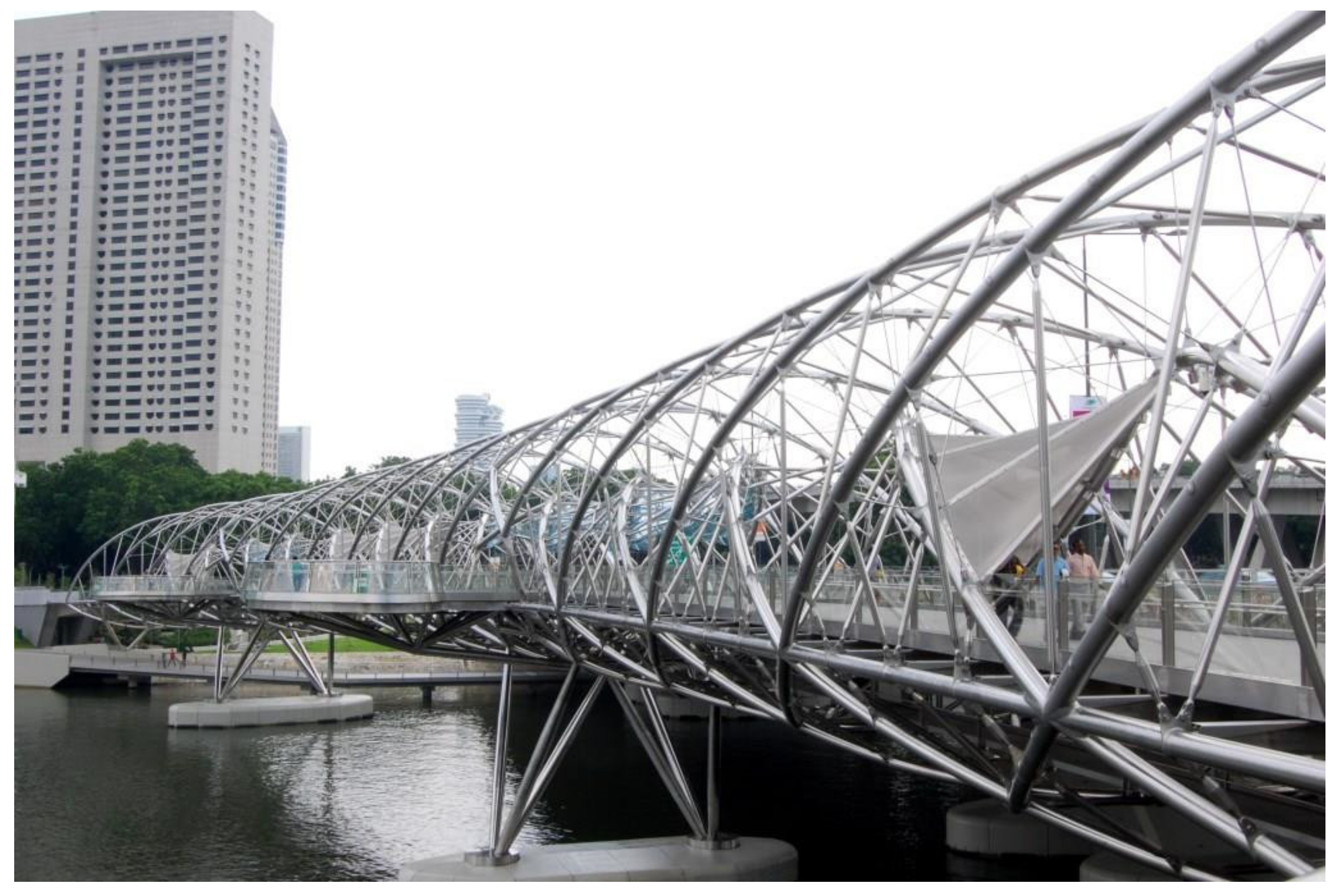