The present research addresses the effect of surface condition on oxide scale formation at high temperatures such as those experienced during secondary cooling in Continuous Casting. Tests were carried out in clean, as-cast and surfaces covered with casting powder to replicate the oxidation/re-oxidation after the mould. Specimens oxidized at 1000, 1100 and 1200 °C under dry air and water-vapour conditions revealed that the oxide scale formation is strongly influenced by temperature, environmental and surface conditions. The oxide scale thickness increases with temperature alterations in the surface (e.g., as-cast and covered with powder) where oxides and carbonates from the casting powder accelerate oxidation kinetics leading to thick and unstable scales. A high amount of carbon is present on surfaces covered with casting powder where it diffuses through the oxide scale forming CO and CO2 which lead to stress accumulation that makes scales prone to defects such as pores, voids and micro-cracks. Ultimately, if wüstite remains attached to the steel surface or inside oscillation marks, it may disturb heat transfer during secondary cooling which has deep industrial implications for crack formation and overall casting yield. Therefore, accurate insights on scale type and growth mechanisms could lead to accurate control of its formation during casting. View Full-Text
Keywords: oxide scale; water vapour; surface conditions; continuous casting; casting powder oxide scale; water vapour; surface conditions; continuous casting; casting powder
►▼ Show Figures 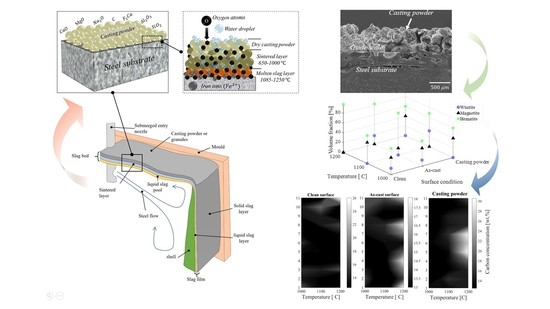