This study proposes an electromagnetic-assisted stamping (EMAS) method with magnetic-force loading at the sheet end in order to control the springback phenomenon. The new method does not change the structure of the mold and does not generate a magnetic force at the sheet corner compared to traditional EMAS. Thus, the new approach could greatly extend the mold lifespan and could be readily adopted in commercial production environments. The effects of technological parameters, such as the distance between the blank holder and die, discharge voltage, and sheet thickness on the springback phenomenon were analyzed. Our results suggest that tangential stress and elastic strain energy both decrease with the increase of discharge voltage. The simulation method accurately predicted the deformation of the sheet during the quasi-static stamping and dynamic magnetic forming processes. The simulation and experimental results both show that as the discharge voltage increases, the bent angle after springback decreases. View Full-Text
Keywords: electromagnetic-assisted stamping; coupled magnetic–structural analysis; springback control electromagnetic-assisted stamping; coupled magnetic–structural analysis; springback control
►▼ Show Figures 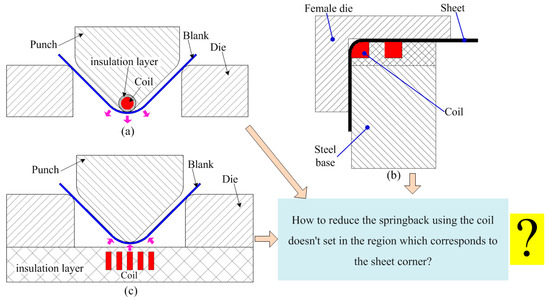