:
A physical-based model for the flow stress of bcc metals is presented. Here, thermally activated and viscous drag regimes are considered. For the thermally activated component of the flow stress, the diffusion-controlled regime at elevated temperature is also taken into account assuming the non-linear dependence of the activation volume on temperature. The model was applied to A508 (16MND5) steel showing the possibility to accurately describe the variation of the flow stress over the entire temperature range (from 0 K to Tm) and over a wide strain-rate range.
Keywords:
flow stress; activation volume; strain rate; temperature; bcc

Today, numerical simulation tools have the potential to anticipate the performance of components and systems under varying operational scenarios, dramatically reducing the need for verification experiments and accelerating the engineering design process [1]. For what concerns the mechanical response is that the reliability of such predictive approach relies on the accuracy of material constitutive models used in the simulations. In many industrial sectors, such as defense, aerospace, oil and gas, automotive and manufacturing engineering applications, there is an increasing demand for models capable to describe material behavior under complex load paths involving large inelastic deformation and failure under different strain rate and temperature conditions. Over the past hundred years, modelling of deformation of metals and alloys has been largely investigated. A review of non-linear constitutive models can be found in [2,3]. For what concern the material yield stress is that the classical rate-independent plasticity theories represent idealizations which in general have limited applicability. Macroscopic constitutive formulations can be categorized into two main groups: phenomenological constitutive relationships and physical-based models. Models that fall in the first group are mathematical formulations for the material flow stress as a function of plastic strain, strain rate, and temperature, which are developed based on the empirical observations. Usually, these mathematical expressions fit the experimental data but not necessarily address any specific deformation mechanism. They require few material constants that can be determined easily by fitting or inverse calibration of simple tensile or compression test data. Since the mathematical expression of the flow stress is given in explicit form, its implementation in the finite element method (FEM) code is straightforward. Nowadays, many of these models are readily available in the material library of commercial FEM software. Examples of these type of models are Cowper and Symonds [4], Johnson and Cook [5], and Bodner and Partom [6]. The main limitation of these formulations is that they work well only over a limited range of variability of the constitutive variables (i.e., plastic strain, strain rate, and temperature) over which model parameters are determined. Plastic deformation in metals, which deform through dislocations motion and accumulation, is in general a rate- and temperature-dependent process [7]. The motion of dislocations through the crystals of a polycrystalline alloy is a complex phenomenon with various features which cannot be described by simple mathematical models. Physical-based models are derived considering the micromechanics of plastic deformation and are based on the thermally activated motion of dislocations [8]. These models usually can predict fairly well as material behavior over a much wider range of variability of strain, strain rate, and temperature, but they require a larger number of material constants that have physical meaning but are more challenging to be determined. Examples of such type of models can be found in Kocks et al. [9], Follansbee and Kocks [10], Nemat-Nasser and Li [7], and Voyiadjis and Abed [11].
Probably the feature that most distinguishes bcc pure metals and alloys from their fcc and hcp counterparts is the strong temperature dependence of the yield and flow stresses at low temperatures and its related effect on slip geometry [12]. Modelling the yield stress for these class of metals over a wide range of temperature and strain rates is a challenge. Cosrad [13] investigated the variation of the yield stress at low temperature in bcc polycrystals metals and alloys. In particular, he observed that the temperature sensitivity of the yield stress in iron increases with grain boundary and interstitial impurities. Kawata et al. [14] investigated strain rate effect on ductility in bcc and fcc metals. Zerilli and Armstrong [15] proposed a dislocation-mechanics-based constitutive relations for bcc and fcc metals based on the observation that in bcc metals the activation volume is essentially independent of plastic strain while in fcc metals thermal activation is strongly dependent on strain. Klepaczko [16] provided a comprehensive review of physical-based models for metals with different crystal lattice. More recently, Bonora and Milella [17] proposed a semi-empirical constitutive model incorporating damage for predicting both material response and fracture under varying strain rate and temperature conditions. Voyiadjis and Abed [18] developed a physically based yield function for bcc metals. Rusinek and Klepaczko [19] developed a visco-plastic, physically based model, later modified by Rusinek et al. [20] for application in a wide strain rate range. Later, Bonora et al. [21] extended the Rusinek-modified model to simulate deformation of OFHC (oxygen-free high-conductivity) copper under large strain, elevated temperature, and very high strain rate conditions. These are only few examples of an extensive literature. A detailed review of experimental testing and modelling for bcc metals can be found in [22,23] and more recently in [24,25,26].
However, most of the model formulations are limited to specific temperature and strain rate range. For instance, most of the models address the variation of the yield stress for temperature below 0.2 of the melting temperature Tm where experimental data show the largest temperature effect while very few consider the variation of the yield stress at elevated temperature where deformation process is controlled by diffusion. Similarly, the strain rate effect is often considered only in the range controlled by thermal activation while the regime of the very high strain rates, where viscous effects become dominant, is frequently not considered. Thus, the objective of this paper is to derive physically based constitutive relations for bcc metals over the whole temperature range, from 0 K to Tm, and for strain rate ranging from 10−4/s up to 107/s considering thermally activated, diffusion controlled, and viscous regimes.

The proposed model has been validated predicting the yield stress at different strain rates and temperature for A508 steel (equivalent to 16MND5). This is a low alloyed steel with bcc atomic structure, developed for reactor pressure vessel applications. The microstructure is a restored bainite and the ferritic matrix is reinforced by carbides (of the order of 1 μm) resulting from the precipitation of cementite, upper and lower (spheroids) bainite together with several types of inclusions manganese sulphide (MnS). The reference composition is given in Table 1 [35].
Experimental data at different temperature and strain rates were taken from different sources [40,41,42].
Identification of model parameters has been performed as follow. First, non-linear fitting of yield stress data as a function of temperature, for the nominal strain rate of 10−4/s, was performed using Equation (30) neglecting the contribution of the viscous drag. Here, the athermal stress was treated as a single parameter. As a result of this procedure , , A, , , and m were determined. Second, the remaining model parameters, λ, were determined by fitting yield stress data as a function of the strain rate for T = 293 K. Tm is given for the material under investigation and is taken as 106/s.
In Figure 1, the comparison of the present model solution (fitted) for the yield stress as a function of temperature and experimental the data is given. In Figure 2, the predicted yield stress as a function of the strain rate at different temperature is shown.
Finally, material model parameters for A508 steel are summarized in Table 2.

In this work a physically based model for the yield stress in bcc has been developed based on dislocations mechanics and according to a thermodynamical treatment of deformation. Although the approach for physically based model is well established in the literature, in the present paper the expression for the temperature activation volume, which is highly nonlinear over the whole temperature range, predicts the coupling between strain rate and temperature effect in the thermally activated regime of the yield stress. In addition, predicted strain rate effect, , is found consistent with that of the Johnson and Cook of phenomenological derivation, providing a physical meaning to the scale factor that here is the strain rate at which the thermal activation effect becomes dominant over the athermal stress component, with being temperature dependent. 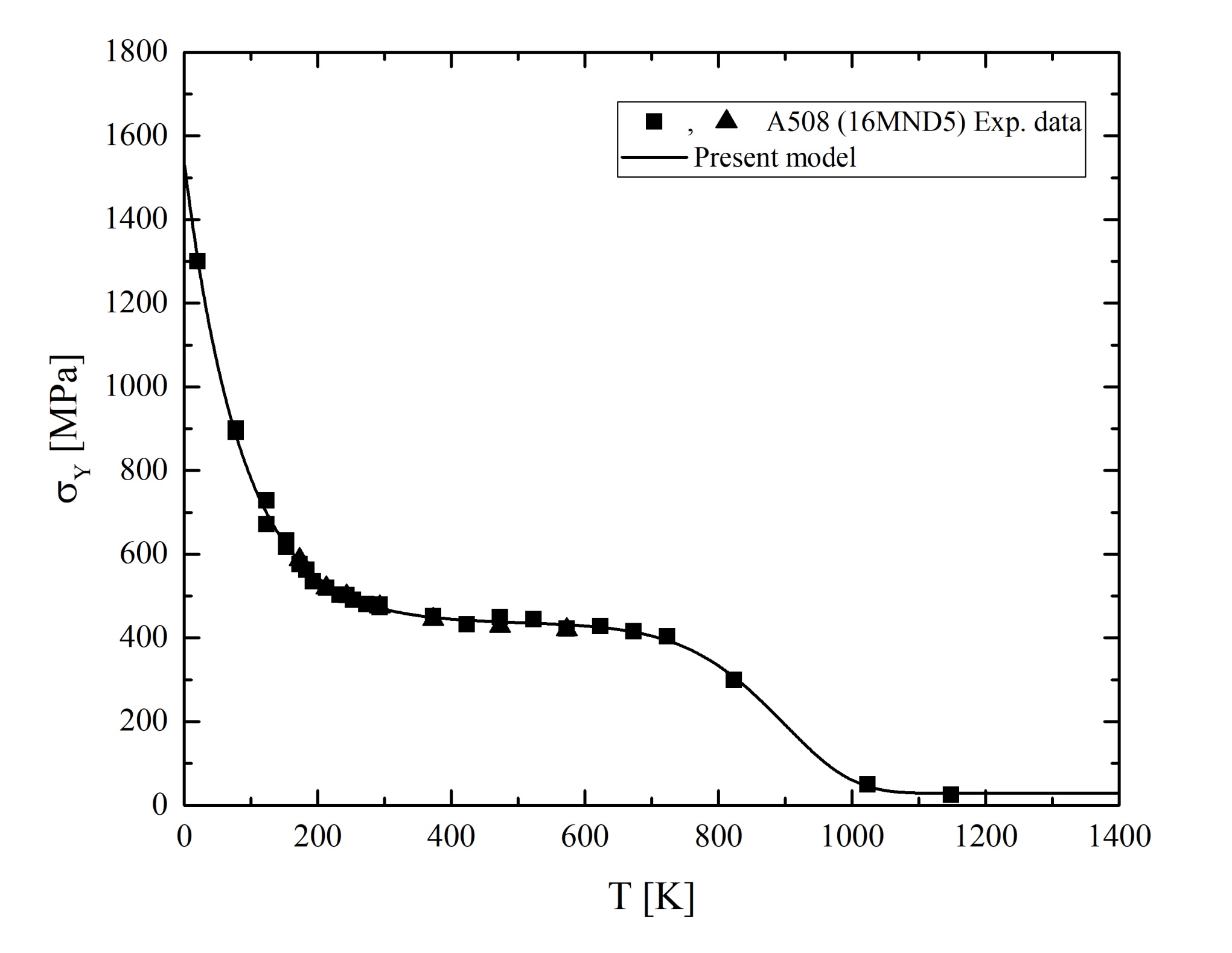 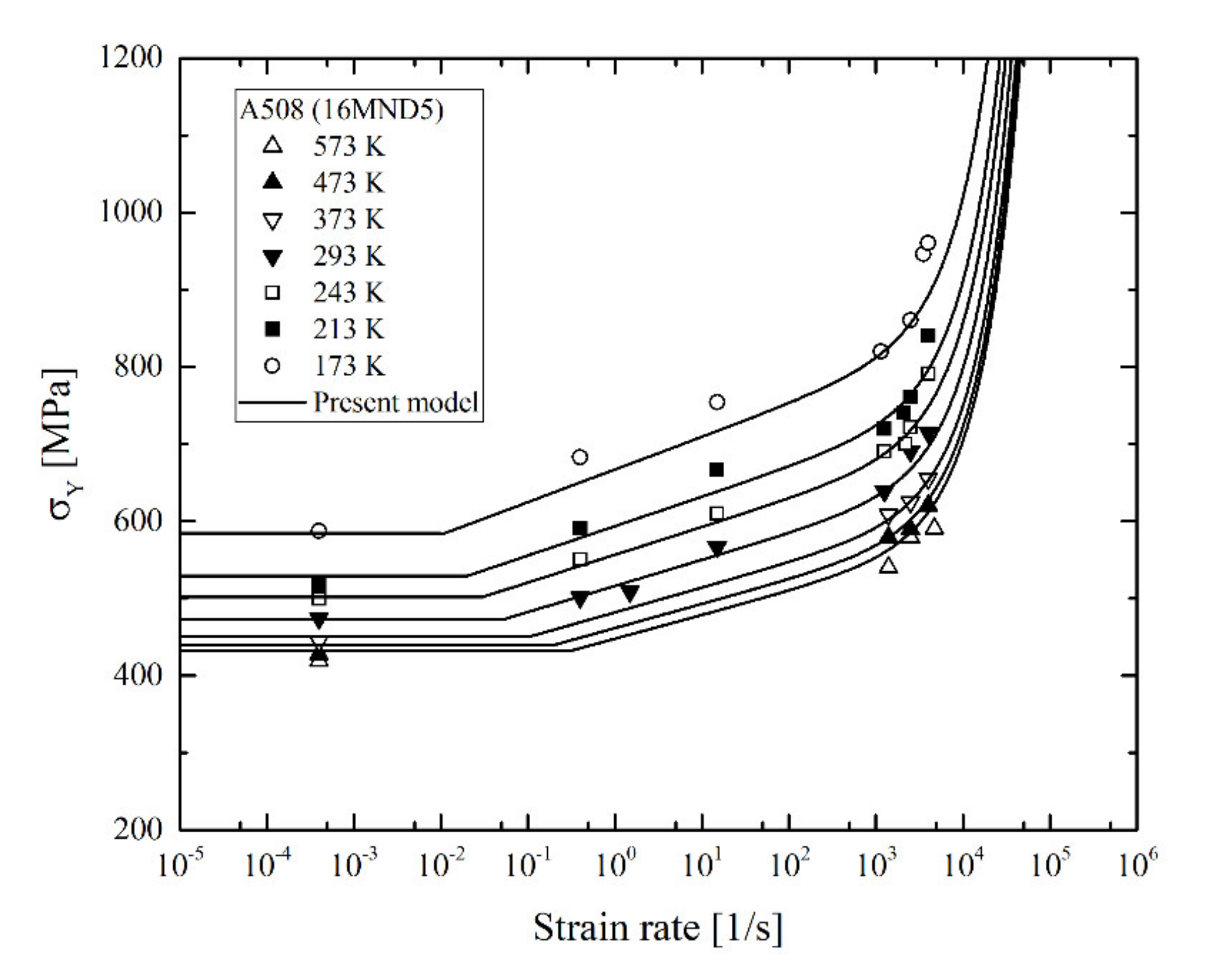 Table 2. Model parameters for A508 steel.
Table 2. Model parameters for A508 steel.
© 2020 by the authors. Licensee MDPI, Basel, Switzerland. This article is an open access article distributed under the terms and conditions of the Creative Commons Attribution (CC BY) license (http://creativecommons.org/licenses/by/4.0/).
We use cookies on our website to ensure you get the best experience. Read more about our cookies here.
Accept
We have just recently launched a new version of our website. Help us to further improve by taking part in this short 5 minute survey here. here.
Never show this again