‘Boxing Is Our Business’: The Embodiment of a Leftist Identity in Boxe Popolare
Next Article in Special Issue

The Effects of Perceived Neighborhood Diversity on Preferences for Redistribution: A Pilot Study

Immigration has been a major trend in the last decades in Europe. However, immigrant access to the social security systems has remained a contentious issue having gained additional salience in light of the recent asylum-seeking developments. We focus on welfare chauvinism, the idea that immigrants should not participate in welfare resources, as an attitudinal dimension. We seek to answer two primary questions: To what extent are different types of objective and subjective material deprivation related to welfare chauvinism? What is the role of the recent asylum seeker influx? Using European Social Survey data and employing binary and generalized ordered logit models with country fixed effects, we find perceptions of deprivation to be more meaningful than objective factors related to potential job loss, and some relationships depend on the specific type of deprivation. On the country level, in line with the deservingness of asylum seekers as a group, higher levels of asylum seeking are related to lower levels of welfare chauvinism, while GDP per capita is not associated with welfare chauvinism. Finally, the generalized ordered logit model shows that some relationships vary according to the strictness of welfare chauvinism, which would not be visible in a conventional ordered logit model. View Full-Text
Keywords: immigration; welfare chauvinism; public opinion; European Social Survey; Europe immigration; welfare chauvinism; public opinion; European Social Survey; Europe
►▼ Show Figures 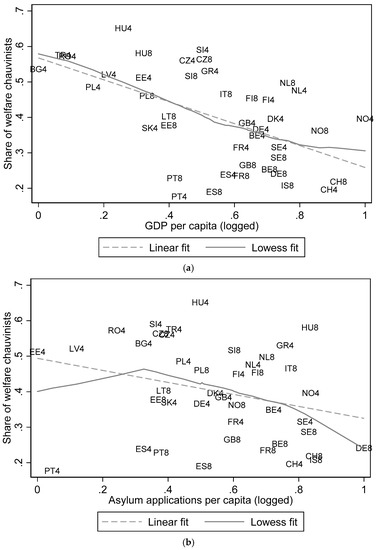