Human Development and Social Support for State Authority in Brazil

Several studies have observed a syndrome of shifting values within different cultures over the past five decades. This work investigates whether these cultural changes have been followed by changes in individual attitudes regarding state authority in Brazil. Using data from the World Values Survey, we tested the hypotheses proposed by Ronald Inglehart that the increasing prevalence of self-expression and secular-rational values has been followed by an increasing societal emphasis on civic autonomy over state authority. The results do not provide evidence to support this hypothesis for Brazil. Instead, the study shows a stable pattern of support for state authority in the past three decades despite the increasing level of self-expression values. The study suggests that these attitudes are related to long-lasting characteristics of the political culture and public expectations regarding the role of the state in reducing social inequality in Brazil. View Full-Text
Keywords: human development; state; political culture; Brazil; world values survey human development; state; political culture; Brazil; world values survey
►▼ Show Figures 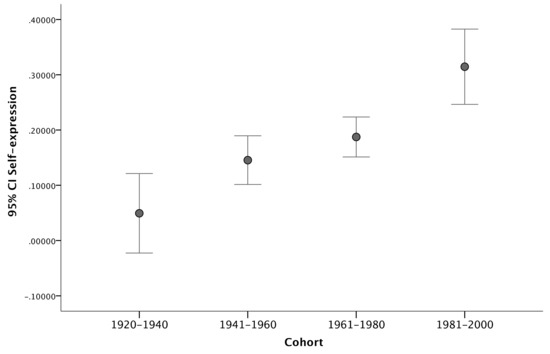