Accelerations (ACC) and decelerations (DEC) are important and frequent actions in soccer. We aimed to investigate whether ACC and DEC were good indicators of the variation of training loads in elite women soccer players. Changes in the training load were monitored during two different selected weeks (considered a “low week” and a “heavy week”) during the in-season. Twelve elite soccer women playing in the French first division wore a 10-Hz Global Positioning System unit recording total distance, distance within speed ranges, sprint number, ACC, DEC, and a heart rate monitor during six soccer training sessions and rated their perceived exertion (RPE). They answered the Hooper questionnaire (sleep, stress, fatigue, DOMS) to get an insight of their subjective fitness level at the start (Hooper S) and at the end of each week (Hooper E). A countermovement jump (CMJ) was also performed once a week. During the heavy week, the training load was significantly greater than the low week when considering number of ACC >2 m·s−2 (28.2 ± 11.9 vs. 56.1 ± 10.1, p < 0.001) and number of DEC < −2 m·s−2 (31.5 ± 13.4 vs. 60.9 ± 14.4, p < 0.001). The mean heart rate percentage (HR%) (p < 0.05), RPE (p < 0.001), and Hooper E (p < 0.001) were significantly greater during the heavy week. ACC and DEC showed significant correlations with most outcomes: HR%, total distance, distance per min, sprint number, Hooper index of Hooper E, DOMS E, Fatigue E, RPE, and session RPE. We concluded that, for elite women soccer players, quantifying ACC and DEC alongside other indicators seemed to be essential for a more complete training load monitoring. Indeed, it could lead to a better understanding of the reasons why athletes get fatigued and give insight into neuromuscular, rather than only energetic, fatigue. View Full-Text
Keywords: workload; monitoring; sprint; heart rate; rate of perceived exertion; GPS workload; monitoring; sprint; heart rate; rate of perceived exertion; GPS
►▼ Show Figures 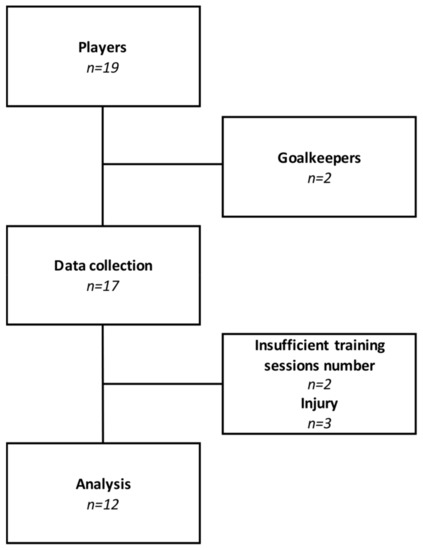