Comparison of High and Low Responders to a Cross-Country Skiing Talent Transfer Program: A Coach’s Perspective
Previous Article in Journal

In this study, we assessed the acute kinematic effects of different sled load conditions (unloaded and at 10%, 20%, 30% decrement from maximum velocity (Vdec)) in different sporting populations. It is well-known that an athlete’s kinematics change with increasing sled load. However, to our knowledge, the relationship between the different loads in resisted sled sprinting (RSS) and kinematic characteristics is unknown. Thirty-three athletes (sprinters n = 10; team sport athletes n = 23) performed a familiarization session (day 1), and 12 sprints at different loads (day 2) over a distance of 40 m. Sprint time and average velocity were measured. Sagittal-plane high-speed video data was recorded for early acceleration and maximum velocity phase and joint angles computed. Loading introduced significant changes to hip, knee, ankle, and trunk angle for touch-down and toe-off for the acceleration and maximum velocity phase (p < 0.05). Knee, hip, and ankle angles became more flexed with increasing load for all groups and trunk lean increased linearly with increasing loading conditions. The results of this study provide coaches with important information that may influence how RSS is employed as a training tool to improve sprint performance for acceleration and maximal velocity running and that prescription may not change based on sporting population, as there were only minimal differences observed between groups. The trunk lean increase was related to the heavy loads and appeared to prevent athletes to reach mechanics that were truly reflective of maximum velocity sprinting. Lighter loads seem to be more adequate to not provoke changes in maxV kinematics. However, heavy loading extended the distance over which it is possible to train acceleration. View Full-Text
Keywords: resisted sprints; sled sprint; kinematics; gait; team sport; sprint athlete resisted sprints; sled sprint; kinematics; gait; team sport; sprint athlete
►▼ Show Figures 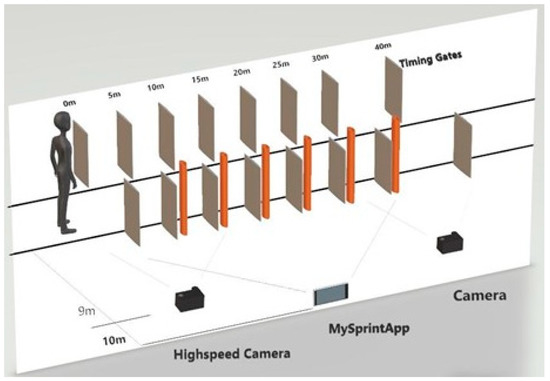