Our purpose was to verify the effects of inorganic nitrate combined to a short training program on 10-km running time-trial (TT) performance, maximum and average power on a Wingate test, and lactate concentration ([La−]) in recreational runners. Sixteen healthy participants were divided randomly into two groups: Nitrate (n = 8) and placebo (n = 8). The experimental group ingested 750 mg/day (~12 mmol) of nitrate plus 5 g of resistant starch, and the control group ingested 6 g of resistant starch, for 30 days. All variables were assessed at baseline and weekly over 30 days. Training took place 3x/week. The time on a 10-km TT decreased significantly (p < 0.001) in all timepoints compared to baseline in both groups, but only the nitrate group was faster in week 2 compared to 1. There was a significant group × time interaction (p < 0.001) with lower [La] in the nitrate group at week 2 (p = 0.032), week 3 (p = 0.002), and week 4 (p = 0.003). There was a significant group time interaction (p = 0.028) for Wingate average power and a main effect of time for maximum power (p < 0.001) and [La−] for the 60-s Wingate test. In conclusion, nitrate ingestion during a four-week running program improved 10-km TT performance and kept blood [La−] steady when compared to placebo in recreational runners.
Keywords: sport nutrition; endurance training; performance; nitrate sport nutrition; endurance training; performance; nitrate

Nitrate is an inorganic anion present in the environment in various foods, especially vegetables such as celery, beetroot, lettuce and spinach [1,2]. After its consumption, nitrate circulates through the plasma, with an average half-life of 5 h. After it is absorbed in the blood, about 25% returns to the salivary glands, through an active transport, and concentrates in the saliva, with the rest being excreted by the kidneys. Nitrate concentrated in saliva is converted to nitrite by facultative commensal bacteria, which reside in crypts on the surface of the tongue. After that, this nitrite can be converted to nitric oxide in the stomach, due to its acidity becoming available to the organism [1,3,4,5].
The daily doses of 4.1 mmol to 16.8 mmol (approximately 250 mg to 1 g) of nitrate, consumed from 2 to 15 days, increase nitrite levels in the blood [1,6,7,8]. A review article showed that the typical averages used in studies range from 5 mmol to 9 mmol (approximately 300 mg to 550 mg) [1]. Nitrate is consumed usually between 1.5 h and 3 h before exercise, in a single dose up to five times per day [6,7,9,10,11].
Studies have shown that nitrate supplementation promotes vasodilatation, increases blood flow to the muscle, favoring the uptake of nutrients in the skeletal muscle and muscle contraction, attenuating the release of excess calcium, and subsequently reducing the ATP production cost [12,13]. Larsen et al. [14] showed that 0.1 mmol/kg/day of sodium nitrate supplementation in isolated skeletal muscle mitochondria promotes higher respiratory control than mitochondria from non-supplemented controls. Lansley et al. [15] showed that nitrate supplementation (6.2 mmol of nitrate in beetroot juice) for six days decreased 7% the oxygen amount required for constant rate moderate work and 15% in severe intensity running. Therefore, the low cost of oxygen in exercises with submaximal intensity, the greater mitochondrial efficiency, and physiological responses of fast twitch fibers (type II fibers), which can reduce NO3 to NO2, improving local perfusion, fatigue resistance, and muscle fiber contraction could improve performance of runners in sprint races [11,16,17].
Some investigations analyzed the performance effects of nitrate supplementation on runners. The meta-analysis from Hoon et al. [18] demonstrated that the nitrate supplementation had a minor benefit on time-trial (TT) performance and graded exercise tests in trained participants. Jones (2014) also showed that greater effects occurred when nitrate was ingested chronically and exercise was less than 30 min, such as short bouts or sprints. de Castro et al. [19] verified the effects of chronic nitrate supplementation on 10-km running performance in recreational runners and they administered 420 mL of beetroot juice for three days, and on the days of the assessments, the ingestion occurred 2 h before the test. The authors observed lower time to complete the first half of the test (5 km) compared to placebo, however, there were no statistically significant difference in the performance of the 10-km run. Thus, it seems that trained participants usually present minor responses to nitrate supplementation [20]. Therefore, there was no investigation of the ergogenicity of nitrate ingestion during a training program. One may hypothesize that the chronic ingestion of nitrate may enhance the responses to training, and, thereby, further improve performance.
Therefore, the purpose of the present study was to verify the effects of inorganic nitrate supplementation combined with a periodized running program on two different outcomes; the primary was 10-km running TT performance and the power developed during a Wingate test, and the second was the [La−] in the mentioned tests in recreationally trained runners.

2.1. Experimental Approach to the Problem

This study was a randomized trial, double-blind design. Before any intervention, all participants signed the informed consent, and the study was approved by the Research Ethics Committee. Then, the participants were divided randomly into a nitrate or placebo group. Participants performed the same running training protocol during the study (described below). The participants completed a 60-s Wingate Test and a 10-km running TT at baseline and weekly during the training program. The Wingate test and the TT were conducted at the same time of the day and on the Friday and the Sunday of every week, respectively. This study has an experimental design similar to other studies already published by our group, including the study of Santana et al. [21].

Twenty healthy men were selected for this study. Participants with a minimum of 6 months of experience, with personal best times for 10 km between 55 and 65 min, and who trained 3 running sessions weekly were selected for the study. No supplements or ergogenics (different from the prescribed) were allowed during the study.
Participants that performed less than 75% of the training sessions, that did not use supplementation as indicated by the authors, that changed their usual diet, and did not present a medical approval form in the first week of the protocol were excluded.
Four participants were excluded after the end of the study because they missed more than 25% of the training sessions (exclusion criteria). No participants dropped out of the study, but we analyzed only the 16 participants remaining (Table 1), performing a per-protocol set analysis.
The University Ethical Committee approved the described experiments (protocol number CAAE: 38414814.3.0000.0089). All participants included in the study agreed to participate in the study and signed the consent form.

Nitrate and placebo supplements were supplied for 30 days using a double-blinded method. All supplements were produced in a compound pharmacy (Orion Compound Pharmacy-São Paulo-Brazil) that gave us bottles with A or B marked on it and then we randomized the distribution considering the performance times of the participants.
The participants randomization was made by two members of our research lab (that were not part of this study) that offered both types of bottles, initially to the 4 slowest runners (those closest to 65 min to complete the 10-kmTT) and so on, to the 4 fastest runners of the group. Once the participant chose a bottle marked with a letter, he should only pick the same letter through the entire experimental protocol.
We understand that this way, we had distributed equally and blinded both supplements through the participants’ entire performance time interval and this distribution produced unbiased data.
The participants that received the placebo (n = 8) ingested 6 g of resistant starch in capsules, divided into three times a day, and the ones who received nitrate (n = 8) ingested 750 mg of inorganic nitrate and 5 g of resistant starch in capsules, divided into three times a day. The participants received capsules with supplements (nitrate or placebo) each week during the intervention, totaling 30 doses in the month [21].
There was no difference in the supplement consumption compliance. Both groups consumed more than 75% of the programmed supplementation in the month (nitrate 29.25 ± 0.9; placebo 29.63 ± 0.5 doses; p = 0.402).

Participants performed a five-minute pre-load with 80% of the maximum heart rate of each individual and, after that, they did a 60 s lead-in on a Wingate bike in order to generate the highest possible power in that period of time, with a load of 2% of the total body weight of the participants [22]. Participants were instructed to wear running clothes and the same running shoes in every test. [La−] was measured using a Roche portable lactate analyzer (Hoffmann–La Roche, Basileia, Switzerland). The analyses were carried out immediately after the 60 s Wingate test.

The 10-km running TT was performed two days after the Wingate test so there was no interference between the tests. Just as the Wingate test, participants were instructed to wear running clothes and the same running shoes in every test.
Tests were executed at the same time, temperature, and climate conditions, according to the local weather forecast information, on an outside running track familiar to the participants. All tests started in the middle of August and finished in the end of September, taking around 45 days; this was the time of a reasonably steady climate condition.
The tests were performed on a running track familiar to the participants, with all external factors interfering, to be as similar as possible to a running competition.
A member of the study recorded time in the running test. Start and finish of the test were in the same place, with all the participants running together; they were not told to compete against each other but that happened, naturally. [La−] was measured as described, through the collection of a drop of blood from the fingertip on a reagent strip using a Roche portable Wingate test [21].

A 2 × 5 (group × time) repeated measures analysis of variance with Bonferroni adjustment for multiple comparisons was used to compare placebo and nitrate group on the performance and [La]. Statistical significance was set at p < 0.05. For all measured variables, the estimated sphericity was verified according to Mauchly’s W test and the Greenhouse–Geisser correction used when necessary. The effect size was also calculated via partial eta-squared for main effect of time (ES). The data were analyzed using the Statistical Package for Social Sciences 17.0 (SPSS Inc., Chicago, IL, USA).

This study presents some limitations. We acknowledge that the number of participants was low and may not be fully representative of the runner population. However, the selection of participants was rigorous. The inclusion and exclusion criteria limited the number of participants, mainly due to the use of any supplements or ergogenic substances during the experimental protocol. Most runners did not want to stop using other supplements during the study.
Control of supplement intake and training was also a limitation of the study. Daily contact was made with everyone, but this contact was sometimes only by text messages, thus some training and supplement intake was not personally verified.
We did not perform the nitrite concentration analysis in the plasma. This analysis would give us further important information that would facilitate the understanding of our data.

All authors declare to have no conflict of interest. 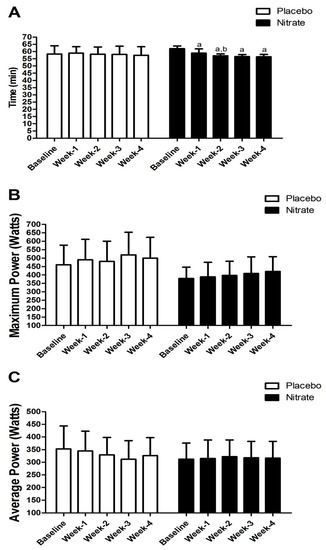 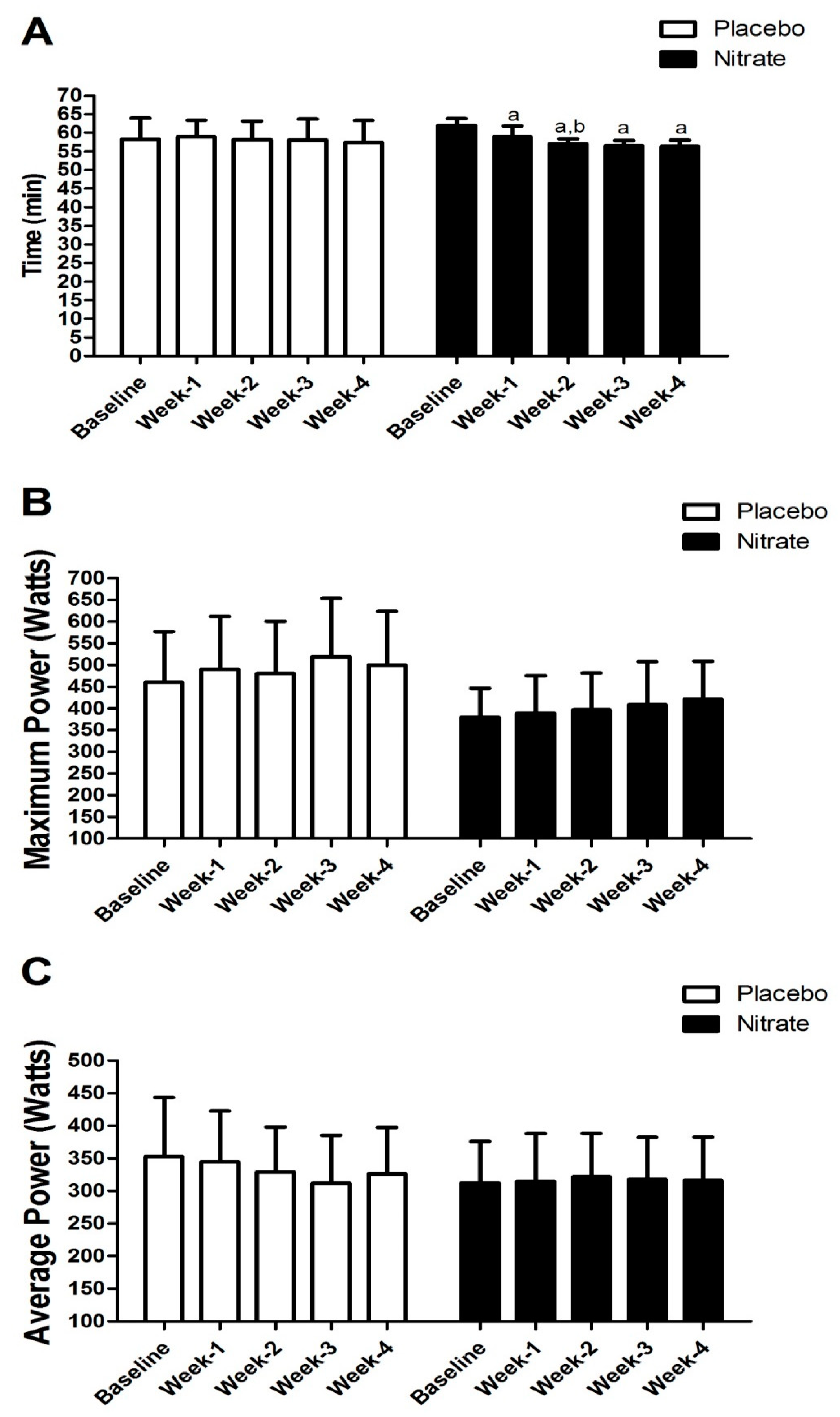 Table 1. General characteristics of the participants at baseline.
Table 1. General characteristics of the participants at baseline.
© 2019 by the authors. Licensee MDPI, Basel, Switzerland. This article is an open access article distributed under the terms and conditions of the Creative Commons Attribution (CC BY) license (http://creativecommons.org/licenses/by/4.0/).
We use cookies on our website to ensure you get the best experience. Read more about our cookies here.
Accept
We have just recently launched a new version of our website. Help us to further improve by taking part in this short 5 minute survey here. here.
Never show this again