Caffeine’s ergogenic effects persist during various exercise modalities; however, information establishing its efficacy during CrossFit protocols is limited. Our study aimed to determine the effects of caffeine supplementation on CrossFit performance. Thirteen CrossFit-trained men (age = 28.5 ± 6.6 years, experience = 49.2 ± 36.3 months) were randomized in a double-blind, crossover design. Participants completed two sessions separated by a seven-day washout period, 60 min after consuming 5 mg/kg body mass of caffeine or a placebo. In each session, participants completed as many rounds as possible in 20 min of 5 pull-ups, 10 push-ups, and 15 air squats. CrossFit performance was the total number of repetitions completed in 20 min. Paired samples t-tests were used to compare CrossFit performance between caffeine and placebo conditions and to test for a potential learning effect between the first and second sessions. CrossFit performance was significantly higher during the caffeine condition compared to the placebo (461.4 ± 103 vs. 425.0 ± 93.5 repetitions, p < 0.05). No significant learning effect was identified between the first and second sessions (445.6 ± 95.0 vs. 440.8 ± 105.0 repetitions, p = 0.73) nor was there a significant treatment order effect (p = 0.40). Caffeine’s ergogenic effect is present during CrossFit; however, future investigations should establish caffeine’s efficacy during other CrossFit protocols and among female athletes. View Full-Text
Keywords: high intensity functional training; exercise; males; muscular endurance; ergogenic aids; sports nutrition high intensity functional training; exercise; males; muscular endurance; ergogenic aids; sports nutrition
►▼ Show Figures 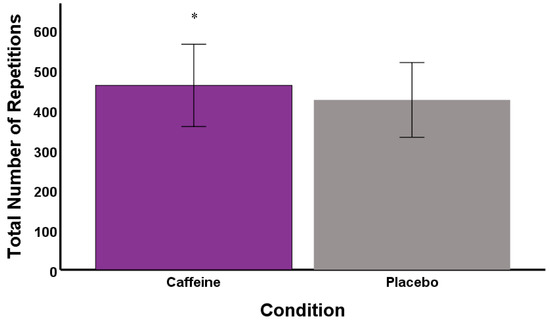