Influence of Training Load on Mood Disturbance at Sea Level and 3900 m Altitude: A Case Study of a Wheelchair Athlete
Previous Article in Journal

:
Ultra-endurance running provides numerous physiological, psychological, and nutritional challenges to the athlete and supporting practitioners. We describe the changes in physiological status, psychological condition, and nutritional intake over the course of two 100-mile running races, with differing outcomes: non-completion and completion. Athlete perception of pain, freshness, and motivation differed between events, independent of rating of perceived exertion. Our data suggest that the integration of multiple sensations (freshness, motivation, hunger, pain, and thirst) produce performance. Increases in carbohydrate feeding (+5 g·h−1) and protein intake (+0.3 g·kg−1) also likely contributed to successful completion of a 100-mile race, by reducing the fractional utilization of maximal oxygen uptake and satiating hunger, respectively. Nutritional data support the notion that the gut is a trainable, and critical organ with respect to ultra-endurance performance. Finally, we propose future research to investigate the rate at which peak feeding occurs throughout ultra-endurance events, as this may further serve to personalize sports nutrition strategies.
Keywords:
ultra-endurance; running; nutrition

Ultra-running is considered to be any running event in excess of a standard marathon (42.2 km [1]). Participation in these events has increased in recent years, on a domestic (Great Britain) and European scale, independent of age or gender [2]. Races are staged in either single-day or multi-day formats, with the latter offering the opportunity for overnight recovery between race segments. Other events have standardised race distances (50 km, 50 miles, 100 km, and 100 miles [1]), or time periods (6 h, 24 h, and multi-day events [1]). Differing terrain and environmental conditions, including extreme temperatures or high altitude, affect the difficulty of such events.
Throughout ultra-marathons interactions between psychological and physiological factors can influence performance [3], yet currently these are poorly understood [3]. These interactions may hold a key to better understanding what limits performance in this group of athletes [4], especially in amateur participants [3,5]. Athletes’ rating of perceived exertion (RPE) may oscillate during an event in accordance with fluctuations in other characteristics, such as pacing, pain [4,6], mental fatigue [7], and maximal sustainable power [5]. It is unlikely that these factors act in isolation with respect to performance. More likely, an athlete’s psychological state interacts with their physiological condition, and the environmental conditions, with all fluctuating throughout the race [8,9].
Many physiological variables affect ultra-marathon running performance, most notably the energetic cost of running (running economy) and anthropometric characteristics of an individual [10] with lactate threshold (LT) and maximal oxygen uptake (VO2max) also being considered physiologically important [11]. In comparison to shorter distances, a lower fractional utilisation of VO2max must be sustained over a much longer duration, although this has been demonstrated to increase throughout a 90 km ultra-marathon [12], incurring a progressive worsening of the cost of running. Ultra-endurance activity also places significant demands upon the muscular and osteo-articular systems, with substantial changes in bone health [4,13] and bone metabolism [14] being reported. Successful adaptation, and not deterioration of muscular and osteo-articular systems might be a contributing factor to race success [11].
Appropriate nutrition [15,16,17] and hydration [18,19] strategies may attenuate performance decrements during ultra-endurance running. Meeting energy requirements is challenging [20,21] and achieving adequate carbohydrate (CHO) intake is preferable to maximise overall calorie consumption [15,20,21]. A sustained and well-tolerated CHO intake, preferably from multiple transportable sources [22], has been shown to support prolonged high-intensity activity, with more pronounced effects being observed in longer events [23]. Gastro-intestinal (GI) symptoms during ultra-endurance events are frequently reported; therefore, attenuation of GI symptoms either through nutritional training [24] or physiological adaptation [22] might play a part in successful completion and competitive racing over ultra-distances. Carbohydrate intakes of 71 ± 20 g per hour have been reported in elite ultra-marathon runners [17], attaining current recommendations [22].
This case study describes the physiological and psychological determinants of ultra-endurance running performance, over two contrasting attempts (non-completion vs. completion). The inclusion of nutritional data adds to the small body of empirical evidence currently available on this aspect of ultra-endurance performance.

The linear trends for all subjective data are presented in Figure 1 and include the slope and standard error. Pearson’s correlations are presented in Table 2. Differences between changes in VAS score were trivial for RPE and thirst, but substantial differences were observed between races in all other subjective measures. Given large to near perfect correlations between pain and freshness and motivation, we chose only to provide detail between race differences for pain only. Therefore, in Table 3 and Table 4, we present a detailed evaluation of the athletes’ perceptions of pain and hunger.

Throughout non-completion, the participant consumed a total of 355.3 g CHO, at a rate of 20.15 g·h−1. This equated to a relative consumption of 5.3 g·CHO·kg−1. Food frequency data shows the majority of this intake came from real foods and beverages as opposed to specialist sports nutrition products (n = 8). Over the course of the completion the participant consumed 592.7 g CHO, at a rate of 25.7 g·h−1 (8.8 g.CHO·kg−1). Fewer sports nutrition products were also consumed throughout the successful attempt (n = 7). Absolute protein intake was 90.1 g and 104 g, resulting in relative intakes of 1.3 g·kg−1 and 1.6 g·kg−1 for non-completion and completion, respectively. A total intake of 3776 kcal was recorded in completion with 59% or 2246 kcal coming from CHO sources. In contrast 48% or 1347 kcal were obtained from CHO sources during non-completion, with fewer calories being consumed overall (2806 kcal). Principal carbohydrate values were all higher (Glucose 42 g, Fructose 52 g and Sucrose, 98 g) in completion than in non-completion (Glucose 27.3; Fructose 32.2; and, Sucrose 75 g).

Pain appears to be a key modulator of ultra-endurance running performance, with improvements in perceptions of pain affecting the sensations of freshness and motivation independent of exercise intensity (RPE). Strategies to modify pain in ultra-endurance athletes might improve performance, although we cannot suggest with certainty whether this is an acquired response (competition/training) or one that is directly mediated by intervention e.g., caffeine. In a moderately trained ultra-endurance athlete, a small improvement in the ability to tolerate CHO feeding resulted in improved performance. Tolerance to CHO feeding is a trainable determinant of ultra-endurance activity with higher rates of CHO positively associated with performance, and training status. Future research should investigate rates of peak feeding throughout similar events, with the goal of ascertaining whether competition nutrition strategies can be tailored specifically towards individual tolerance, within the context of current recommendations, event conditions, and logistics.

The authors would like to thank the participant for their cooperation and receptiveness to monitoring and support throughout the two attempts, and the surrounding time period. We would also like to extend our thanks to the race organizers, other participants and support crews for their interest in our efforts. 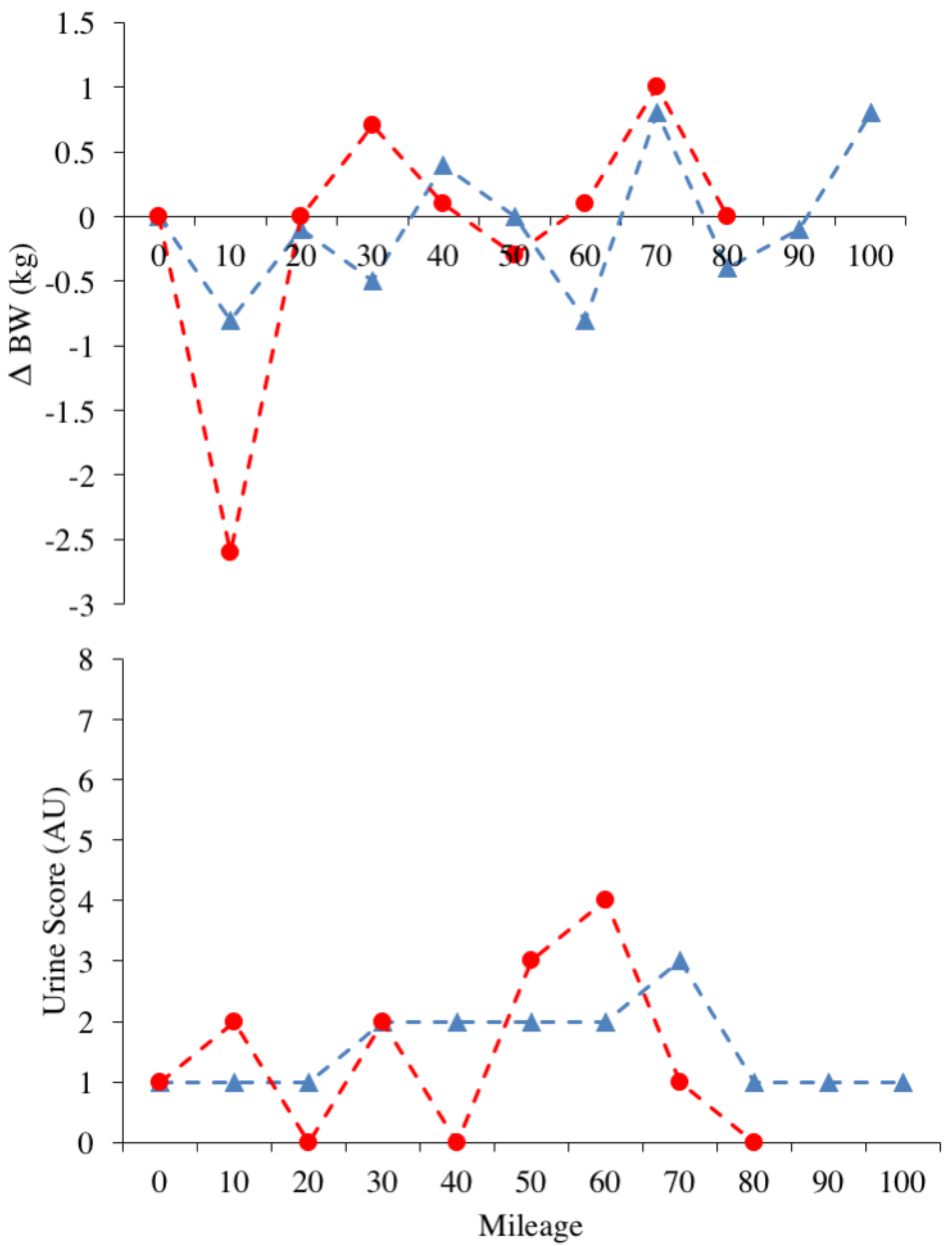