Health Care as a Team Sport?—Studying Athletics to Improve Interprofessional Collaboration
Next Article in Special Issue

The efficacy of carbohydrate (CHO) ingestion during high-intensity strength and conditioning type exercise has yield mixed results. However, little is known about shorter duration high-intensity exercise such as CrossFit. The purpose of this study was to investigate the performance impact of CHO ingestion during high-intensity exercise sessions lasting approximately 30 min. Eight healthy males participated in a total of four trials; two familiarizations, a CHO trial, and a similarly flavored, non-caloric placebo (PLA) trial. CrossFit’s “Fight Gone Bad Five” (FGBF) workout of the day was the exercise model which incorporated five rounds of maximal repetition exercises, wall throw, box jump, sumo deadlift high pull, push press, and rowing, followed by one minute of rest. Total repetitions and calories expended were summated from each round to quantify total work (FGBF score). No difference was found for the total work between CHO (321 ± 51) or PLA (314 ± 52) trials (p = 0.38). There were also no main effects (p > 0.05) for treatment comparing exercise performance across rounds. Based on the findings of this study, it does not appear that ingestion of CHO during short duration, high-intensity CrossFit exercise will provide a beneficial performance effect. View Full-Text
Keywords: high-intensity exercise; resistance training; ergogenic aids; strength high-intensity exercise; resistance training; ergogenic aids; strength
►▼ Show Figures 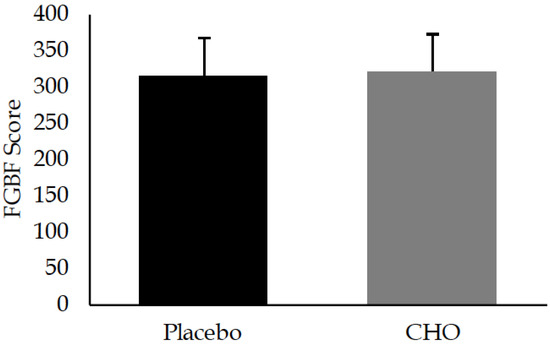