Genome-wide epigenetic changes in plants are being reported during development and environmental stresses, which are often correlated with gene expression at the transcriptional level. The sum total of the biochemical changes in nuclear DNA, post-translational modifications in histone proteins and variations in the biogenesis of non-coding RNAs in a cell is known as an epigenome. These changes are often responsible for variation in the expression of the gene without any change in the underlying nucleotide sequence. The changes might also cause variation in chromatin structure resulting in the changes in function/activity of the genome. The epigenomic changes are dynamic with respect to the endogenous and/or environmental stimuli, which affect phenotypic plasticity of the organism. Both the epigenetic changes and variation in gene expression might return to the pre-stress state soon after the withdrawal of the stress. However, a part of the epigenetic changes may be retained, which is reported to play a role in acclimatization and adaptation as well as in the evolutionary process. Probable exploitation of epigenome-engineering for improved stress tolerance in plants has become essential for better utilization of the genetic resources. This review delineates the importance of epigenomics towards the possible improvement of plant responses to environmental stresses for climate resilient agriculture. View Full-Text
Keywords: DNA modification; cytosine methylation; epigenome; gene regulation; histone modification; 5-methylcytosine; stress response DNA modification; cytosine methylation; epigenome; gene regulation; histone modification; 5-methylcytosine; stress response
►▼ Show Figures 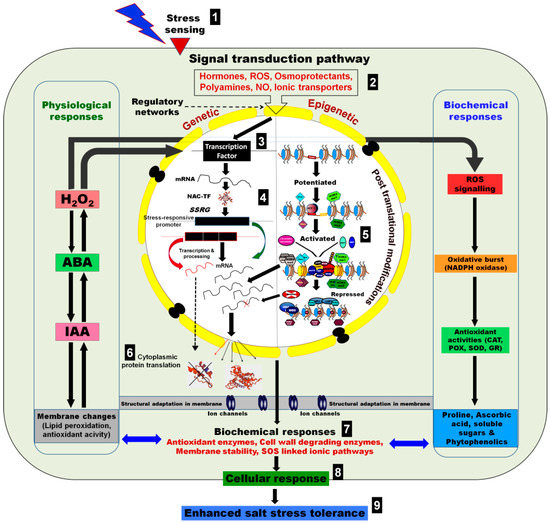