Emerging pests are increasingly threatening fruit orchard health across the Mediterranean area. Tephritidae, representing serious threats for Europe, are numerous, and the fruit flies Bactrocera zonata and those belonging to Bactrocera dorsalis complex are among the most alarming species. These species are highly polyphagous and B. zonata has already spread to some Mediterranean countries. Due to these ongoing threats, in the Campania Region (southern Italy), a survey with traps and infested fruits analysis was performed with the aim of detecting the presence of species of Bactrocera dorsalis complex. In two mixed fruit-trees fields, some adults belonging to a species of Bactrocera were captured in traps baited with the highly attractive male lure (methyl eugenol). They were distinguished from similar-looking Bactrocera spp. by morphological and molecular comparative analyses. Considering the existing morphological keys, specimens were tentatively identified as B. dorsalis but molecular characterization with COI split them into two clades. Some specimens were grouped with B. dorsalis similar to B. kandiensis and B. kandiensis and others in a clade including B. dorsalis and B. invadens (syn. B. dorsalis). ITS1 sequences instead confirmed morphological identification. The integrative approach allowed identifying all the specimens collected as belonging to the B. dorsalis complex. This finding represents the first field interception in Europe of a member of one of the most dangerous groups of fruit flies. View Full-Text
Keywords: Bactrocera dorsalis; B. kandiensis; first record; fruit fly; invasive species; male lure; species complex Bactrocera dorsalis; B. kandiensis; first record; fruit fly; invasive species; male lure; species complex
►▼ Show Figures 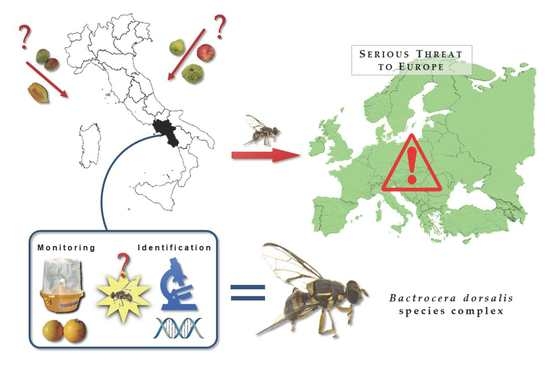