Mosquitoes have distinct developmental and adult life history, and the vectorial capacity of females has been shown to be affected by the larval nutritional environment. However, little is known about the effect of developmental nutrition on insulin-signaling and nutrient storage. In this study, we used Aedes aegypti, the yellow fever mosquito, to determine whether larval nutrition affects insulin gene expression. We also determined the traits regulated by insulin signaling, such as stored-nutrient levels and fecundity. We raised mosquito larvae on two different diets, containing either high protein or high carbohydrates. Development on a high-carbohydrate diet resulted in several life-history phenotypes indicative of suboptimal conditions, including increased developmental time and decreased fecundity. Additionally, our data showed that insulin transcript levels are affected by a high-carbohydrate diet during development. Females, not males, reared on high-carbohydrate diets had much higher transcript levels of insulin-like peptide 3 (ILP3), a mosquito equivalent of human insulin, and these females more readily converted sugar meals into lipids. We also found that AaILP4, not AaILP3, transcript levels were much higher in the males after a sugar meal, suggesting sex-specific differences in the insulin-signaling pathway. Our findings suggest a conserved mechanism of carbohydrate-mediated hyperinsulinemia in animals. View Full-Text
Keywords: insulin-signaling; insulin receptor; Aedes aegypti; mosquitoes; insulin; insulin-like peptides; nutrition; hyperinsulinemia; larval-diet; metabolic reserves insulin-signaling; insulin receptor; Aedes aegypti; mosquitoes; insulin; insulin-like peptides; nutrition; hyperinsulinemia; larval-diet; metabolic reserves
►▼ Show Figures 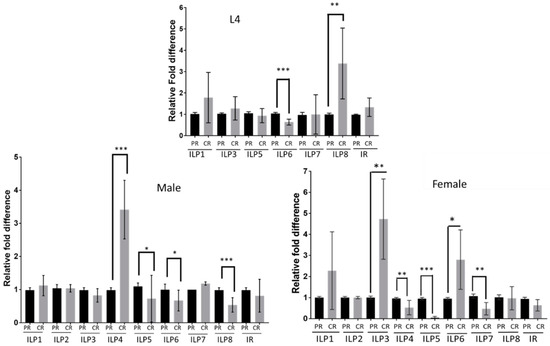