The efficacies of various acaricides in order to control a parasitic mite, the Varroa mite, Varroa destructor, of honey bees, were measured in two different settings, namely, in laboratory caged honey bees and in queen-right honey bee colonies. The Varroa infestation levels before, during, and after the acaricide treatments were determined in two ways, namely: (1) using the sugar shake protocol to count mites on bees and (2) directly counting the dead mites on the hive bottom inserts. The acaricides that were evaluated were coumaphos, tau-fluvalinate, amitraz, thymol, and natural plant compounds (hop acids), which were the active ingredients. The acaricide efficacies in the colonies were evaluated in conjunction with the final coumaphos applications. All of the tested acaricides significantly increased the overall Varroa mortality in the laboratory experiment. Their highest efficiencies were recorded at 6 h post-treatment, except for coumaphos and thymol, which exhibited longer and more consistent activity. In the honey bee colonies, a higher Varroa mortality was recorded in all of the treatments, compared with the natural Varroa mortality during the pretreatment period. The acaricide toxicity to the Varroa mites was consistent in both the caged adult honey bees and workers in the queen-right colonies, although, two of these acaricides, coumaphos at the highest doses and hop acids, were comparatively more toxic to the worker bees. View Full-Text
Keywords: Varroa destructor; honey bee; caged-bees; varroacides Varroa destructor; honey bee; caged-bees; varroacides
►▼ Show Figures 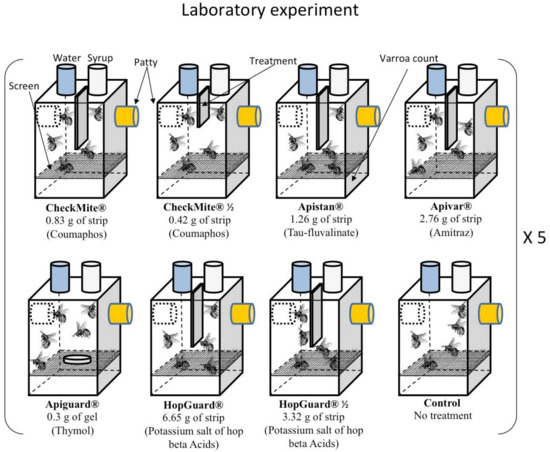