The White Mountain Fritillary (Boloria chariclea montinus) is a subspecies of the widely-distributed Arctic Fritillary (B. chariclea) and is endemic to the ca 1130 ha alpine zone of the Presidential Range of the White Mountains of New Hampshire, USA. This subspecies is a glacial relict that was likely widespread at the end of the last glaciation but that has since become isolated from conspecific populations as appropriate habitat in intervening areas vanished as the climate warmed. Based on reconstructions of post-glacial vegetation history, the alpine environment occupied currently by White Mountain Fritillary was isolated from retreating tundra vegetation by advancing subalpine forest approximately 9000 years before present [1]. Since then, White Mountain Fritillary has been isolated from populations that followed the retreating tundra northward.
Very little is known of the life history, habitat requirements, or abundance of White Mountain Fritillary. Although the conservation status of Arctic Fritillary is considered secure globally, White Mountain Fritillary is considered critically imperiled due to its perceived rarity and extremely limited distribution [2]. Scudder [3] (p. 605) offered the earliest comments on the population status:
“Probably no wandering collector has often seen more than eight or ten of these butterflies in a day’s scramble among the mountains, but if sought early in July they might be found in greater abundance; on a single occasion only I have seen as many as four at one time; they are most common about the steep heads of the great ravines”.
Later, Scudder [4] (pp. 152–153) wrote, “The ‘White Mountain Fritillary’ indeed seems really doomed to destruction. In the scanty numbers that one may find upon the mountain slopes, one sees the sign of their early departure; for, in the many years that I have searched for them with special pains, I have never seen more than a dozen or two specimens in a single day”. No systematic field surveys of White Mountain Fritillary have been conducted since, and so our understanding of this subspecies is only marginally better than it was over a century ago.
Effective conservation of White Mountain Fritillary, especially in light of threats to its alpine habitat from global climate change [5], requires a better understanding of its distribution, abundance, and population trends. In this study, we sought to provide the first description of distribution and density and to lay the groundwork for rigorous population monitoring by examining whether a commonly used approach for monitoring bird populations—point counts (i.e., surveys of a specified radial distance around a discrete point location)—could be used to survey White Mountain Fritillary.

We encountered White Mountain Fritillary less often and counted fewer individuals in 2013 than in 2012. We counted 102 White Mountain Fritillaries in 2012 during 190 surveys (mean count = 0.54; 95% CI = 0.33–0.77) and 40 during 184 surveys in 2013 (mean count = 0.22; 95% CI = 0.10–0.34) (Table S1, Figure S1). In 2012, we detected 1 individual during 51 of the surveys (26.8%) and in 2013 we detected 1 individual during 27 of the surveys (14.7%). Incidence of White Mountain Fritillary during a survey was not evenly distributed among plant communities: the vast majority of surveys in both cushion-tussock (90.9%; 10 surveys) and heath-shrub-rush (80.8%; 274 surveys) yielded no individuals, whereas 50% of surveys (n = 12) in herbaceous snowbank yielded 1 detection of White Mountain Fritillary. The maximum number of individuals counted during a survey in cushion-tussock was 1, but was 5 in herbaceous snowbank and 6 in heath-shrub-rush.
In 2012, we detected White Mountain Fritillary at 41 of the 96 points surveyed (42.7%); in 2013, we detected them at only 22 of the 105 points surveyed (21%; Table S1). Across both years, we detected fritillaries at only a single point in cushion-tussock (25% of points), at 42 points in heath-shrub-rush (41%), and at all six of the points in herbaceous snowbank. Consistency of counts within a point was relatively low: in 2012, 29 of the 41 points (70.7%) at which 1 individual was detected also had 1 survey in which zero individuals were detected, and in 2013 14 of the 22 points (63.6%) with 1 individual detected also had 1 survey in which zero individuals were detected.
The hazard-rate function best described the decline in detection as a function of distance from the observer, and detectability was influenced by the identity of the observer, wind speed during the survey, and maximum temperature on the day of the survey (Table 1). We used these combinations of covariates of detectability in each of the abundance models that we considered.
The best-supported model of abundance included effects of year, the number of inflorescences in the count circle, and the plant community in which the survey was conducted (Table 2). The goodness-of-fit for the model fit with the Poisson distribution was marginal (p = 0.07), but the same model fit with a negative-binomial distribution fit adequately (p = 0.50) and had a substantially lower AIC score (Table 2). Consequently, we used the negative-binomial model as the basis for inference.
Based on the best-fitting model, detectability of White Mountain Fritillary was highest for Observer 1, slightly lower for Observer 2, and lowest for the group of irregular observers pooled together as Observer 3 (Table 3). Increasing wind speed in general had a negative effect on detectability (Table 3), although estimated detectability at the highest wind speed (category 4) was similar to detectability at the lowest wind speeds (categories 0 and 1). Maximum temperature had a significant, positive effect on detectability (Table 3). Overall, detectability estimates were low (Figure 1).
Average density of White Mountain Fritillary during a survey was lower in 2013 than in 2012 (Table 4, Figure 2). Density during a survey was greatest in the herbaceous-snowbank community, intermediate in heath-shrub-rush, and lowest in cushion-tussock (Table 4, Figure 2). The best-supported model predicted an increase in density of fritillaries as the number of inflorescences in the count circle increased (Figure 3).
Although density of fritillaries varied in response to the number of inflorescences present, variation in the number of inflorescences did not appear to explain differences in fritillary density among plant communities. The number of inflorescences counted around survey points was similar in herbaceous snowbank (85.2; 95% CI = 67.1–104.7) and cushion-tussock (84.4; 95% CI = 70.7–98.2), despite substantial differences in density of fritillaries between these two communities, but was substantially lower in heath-shrub-rush (20.2; 95% CI = 14.4–26.9), which had intermediate densities of fritillaries.

Our results suggested that adult White Mountain Fritillaries used primarily the herbaceous snowbank and heath-shrub-rush communities, and thus these communities should be the target for conservation and future monitoring efforts. Monitoring efforts should weight survey effort towards the two most frequently used plant communities, and a relatively lower level of effort should be directed at the cushion-tussock community, which does not appear to be an important habitat for White Mountain Fritillary. We have shown that point counts are a useful approach for surveying in the patchy environment that comprises the alpine zone in the Presidential Range, but we suggest adopting methodologies that account for imperfect detectability while also addressing the demographically open nature of the populations sampled. Finally, future research that verifies our findings of habitat-specific variation in density, and elucidates its causes, perhaps in concert with the collection of more information on natural history, would prove useful in developing conservation strategies that would allow this endemic legacy of past environmental change to persist in the face of present-day global change.

We thank Brendan Collins, Timothy Duclos, Matthew Bartolotti, and Sara Zahendra for helping to conduct field surveys that often required long and difficult hiking, but wonderful views. Doug Weihrauch at the Appalachian Mountain Club provided GIS data of the vegetation types in the alpine zone. Howie Wemyss kindly provided access to the Mt. Washington Auto Road. Appalachian Mountain Club for making available lodging at the Joe Dodge Lodge. Funding for the study was provided by the US Department of Agriculture Forest Service-White Mountain National Forest and the Vermont Center for Ecostudies under a Challenge Cost-Share Agreement.

The authors declare no conflict of interest. The sponsors had no role in the design of the study; in the collection, analyses, or interpretation of data; in the writing of the manuscript, and in the decision to publish the results. 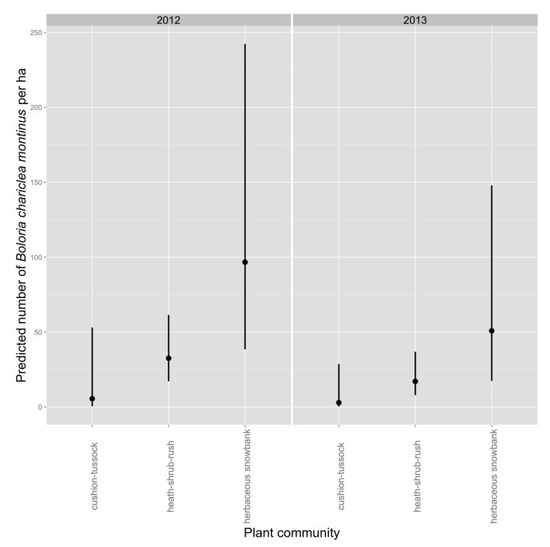 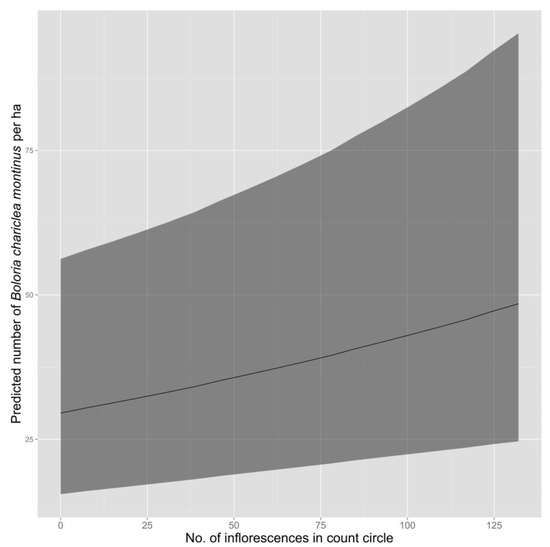