Ecosystem Services from Edible Insects in Agricultural Systems: A Review

Jonathan A. Cammack
* and

This study examined the impact of diet protein and carbohydrate percentages as well as moisture on the immature development, survivorship, and resulting adult longevity and egg production of the black soldier fly, Hermetia illucens (L.) (Diptera: Stratiomyidae). Moisture impacted development and corresponding life-history traits more than protein:carbohydrate content; larvae were unable to develop on diets at 40% moisture. Larvae fed diets at 70% moisture developed faster, grew larger, and required less food than those reared on diets at 55% moisture. Larvae reared on the balanced diet (21% protein:21% carbohydrate) at 70% moisture developed the fastest on the least amount of food and had the greatest survivorship to the prepupal stage. Adult emergence and longevity were similar across treatments, indicating immature life-history traits were impacted the most. The control (Gainesville house fly) diet was superior to the artificial diets for all parameters tested. These differences could indicate that other constituents (e.g., associated microbes) serve a role in black soldier fly development. These data are valuable for industrialization of this insect as a “green” technology for recycling organic waste, which can be highly variable, to produce protein for use as feed in the livestock, poultry, and aquaculture industries, as well as for bioenergy production. View Full-Text
Keywords: artificial diet; mass rearing; alternate protein production; nutrition ecology artificial diet; mass rearing; alternate protein production; nutrition ecology
►▼ Show Figures 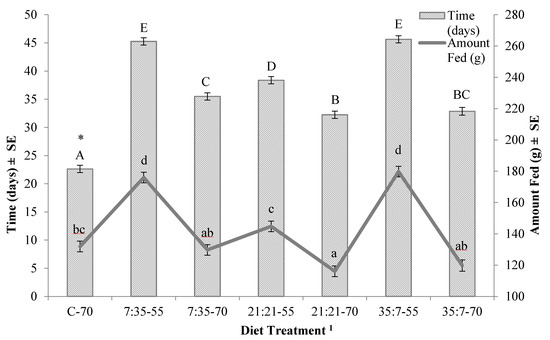