Microgastrinae (Hymenoptera: Braconidae) in the Forest State of Artikutza (Navarra: Spain): Diversity and Community Structure
Next Article in Special Issue

Brevibacillus laterosporus, a Pathogen of Invertebrates and a Broad-Spectrum Antimicrobial Species

Brevibacillus laterosporus, a bacterium characterized by the production of a unique canoe-shaped lamellar body attached to one side of the spore, is a natural inhabitant of water, soil and insects. Its biopesticidal potential has been reported against insects in different orders including Coleoptera, Lepidoptera, Diptera and against nematodes and mollusks. In addition to its pathogenicity against invertebrates, different B. laterosporus strains show a broad-spectrum antimicrobial activity including activity against phytopathogenic bacteria and fungi. A wide variety of molecules, including proteins and antibiotics, have been associated with the observed pathogenicity and mode of action. Before being considered as a biological control agent against plant pathogens, the antifungal and antibacterial properties of certain B. laterosporus strains have found medical interest, associated with the production of antibiotics with therapeutic effects. The recent whole genome sequencing of this species revealed its potential to produce polyketides, nonribosomal peptides, and toxins. Another field of growing interest is the use of this bacterium for bioremediation of contaminated sites by exploiting its biodegradation properties. The aim of the present review is to gather and discuss all recent findings on this emerging entomopathogen, giving a wider picture of its complex and broad-spectrum biocontrol activity. View Full-Text
Keywords: Brevibacillus laterosporus; entomopathogenic bacteria; insecticide; nematicide; biopesticide; pests; biological control; antimicrobial; bioremediation Brevibacillus laterosporus; entomopathogenic bacteria; insecticide; nematicide; biopesticide; pests; biological control; antimicrobial; bioremediation
►▼ Show Figures 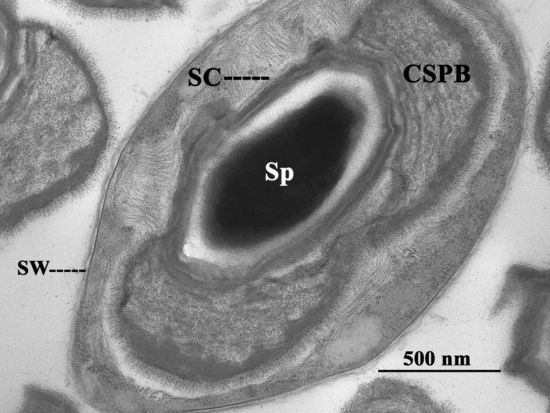 
Ruiu, Luca. 2013. "Brevibacillus laterosporus, a Pathogen of Invertebrates and a Broad-Spectrum Antimicrobial Species." Insects 4, no. 3: 476-492.