Identification and Characterization of MicroRNAs in Gonads of Helicoverpa armigera (Lepidoptera: Noctuidae)
Previous Article in Journal

Effect of Duration of Exposure to Males on Female Reproductive Performance of the Green Lacewing, Chrysoperla agilis (Neuroptera: Chrysopidae)

The effect of duration of exposure to males on female longevity and egg production of the predatory insect Chrysoperla agilis Henry et al. was studied under laboratory conditions. Newly emerged adult females of C. agilis were placed in cages alone or with males, the latter either for 1 week or for the entire females’ lifetime. Females in continuous presence of males laid considerably more eggs than females that had access to males for 1 week. Virgin females lived the longest, and those in the presence of males lived the shortest. Egg hatchability and offspring sex ratio were similar for females exposed to males, irrespective of the duration of exposure. We showed that the presence of one male for 1 week early in the adult life of a female is not sufficient for C. agilis reaching maximum reproduction. Our results are applicable in mass-rearing of C. agilis to be used in biological control against agricultural pests.

Chrysoperla agilis Henry et al. is one of the five cryptic species of the carnea group found in Europe. They are known to widely occur in agricultural fields and survive and reproduce in a wide range of temperatures. The reproductive biology of the cryptic species is poorly known, especially regarding the number of matings required for the females’ maximum reproductive output. We recorded the egg production and longevity of virgin females, as well as of females that had access to males for 1 week or for their lifetime. Longevity of C. agilis females with access to males was similar whether these were present for 1 week or for their lifetime (64.8 and 66.1 days, respectively). On the other hand, oviposition was higher in the long-term exposure to males (302.1 vs. 421.1 eggs, respectively). Virgin females lived longer (94.1 days) than mated females and laid a low number (54.5) of (unfertile) eggs. Egg hatchability and progeny sex ratio were similar in treatments with males. Nevertheless, the highest value (0.1321) of intrinsic rate of increase (rm) was recorded when females were continuously exposed to males. These results are relevant to biological control and could be applicable in mass-rearing C. agilis and predicting its population dynamics in the field. View Full-Text
Keywords: biological control; Chrysoperla spp.; green lacewings; mating; predators biological control; Chrysoperla spp.; green lacewings; mating; predators
►▼ Show Figures 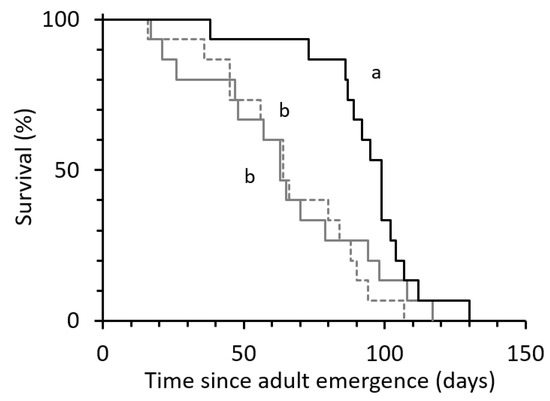