Resistance to Bt Maize by Western Corn Rootworm: Effects of Pest Biology, the Pest–Crop Interaction and the Agricultural Landscape on Resistance
Next Article in Special Issue

Supporting Bees in Cities: How Bees Are Influenced by Local and Landscape Features

Global climate change is causing more frequent and severe droughts, which can have serious impacts on our environment. To examine how a severe drought in 2014 impacted wild bees in scrub habitats of San Diego, California, we compared bee samples collected before and after the drought. We also investigated whether habitat loss and fragmentation worsened the impacts of drought on wild bees by comparing samples collected from large natural reserves to those from small fragments of scrub habitat embedded in urban areas. Samples collected after the drought contained fewer bee species and fewer individual bees of most species, indicating that bee populations suffered losses during the drought. However, after-drought samples contained large numbers of Dialictus sweat bees, indicating that some bee species benefitted from environmental conditions present during the drought. The impact of drought on the composition of bee samples was three fold higher than the impact of habitat fragmentation, and habitat fragmentation did not appear to have exacerbated the impacts of drought. Our findings highlight the importance of studying how impacts of climate change compare with impacts of habitat loss and other threats to biodiversity conservation.

Global climate change is causing more frequent and severe droughts, which could have serious repercussions for the maintenance of biodiversity. Here, we compare native bee assemblages collected via bowl traps before and after a severe drought event in 2014 in San Diego, California, and examine the relative magnitude of impacts from drought in fragmented habitat patches versus unfragmented natural reserves. Bee richness and diversity were higher in assemblages surveyed before the drought compared to those surveyed after the drought. However, bees belonging to the Lasioglossum subgenus Dialictus increased in abundance after the drought, driving increased representation by small-bodied, primitively eusocial, and generalist bees in post-drought assemblages. Conversely, among non-Dialictus bees, post-drought years were associated with decreased abundance and reduced representation by eusocial species. Drought effects were consistently greater in reserves, which supported more bee species, than in fragments, suggesting that fragmentation either had redundant impacts with drought, or ameliorated effects of drought by enhancing bees’ access to floral resources in irrigated urban environments. Shifts in assemblage composition associated with drought were three times greater compared to those associated with habitat fragmentation, highlighting the importance of understanding the impacts of large-scale climatic events relative to those associated with land use change.
Keywords:
coastal sage scrub; global climate change; habitat loss and fragmentation; pollinators; California drought; LasioglossumDialictus

Data collection occurred in coastal sage scrub (CSS) habitats in San Diego County, CA, USA. San Diego, along with the rest of southern California, is a global biodiversity hotspot for both vascular plants [40] and native bees [41,42], and experiences a Mediterranean climate, with the majority of rainfall occurring in the winter months. The CSS flora is adapted to drought conditions [7], as with plant communities in other Mediterranean-climate ecosystems; nevertheless, the CSS flora negatively responds both to severe one-year droughts and to persistent, multi-year droughts [7,43]. The majority of CSS has succumbed to urbanization, agriculture, and other land-use modifications; less than 15% of its original extent in California remains intact [44]. Furthermore, anthropogenic landscapes (i.e., urban and agricultural areas) fragment much of the remaining CSS. Loss and fragmentation of CSS has detrimental effects on a variety of animal taxa [22,34,45,46,47].

Unlike the results of the univariate analyses, multivariate analyses revealed only additive effects of drought and habitat fragmentation on bee assemblage composition (Figure 5). Although bee assemblage composition differed significantly both across study years (PERMANOVA F3,41 = 5.98, p < 0.001) and between reserves and fragments (F1,41 = 5.17, p < 0.001), there was no significant interaction between the two variables (F3,41 = 0.66, p = 0.92). Based on R2 values, study year explained more than three times the amount of variation in the data compared to fragmentation status. Post-hoc tests revealed that bee assemblages in study years with the same drought status differed little, if at all, from each other, while pre- versus post-drought comparisons revealed strong differences in bee assemblage composition (Table 1). On the other hand, we found no evidence of differences in compositional dispersion (i.e., beta diversity) between bee assemblages across study years (F3,45 = 0.84, p = 0.50), between reserves and fragments (PERMDISP F1,47 = 0.024, p = 0.87), or across treatment combinations (i.e., combinations of study year and fragmentation status; F7,41 = 0.91, p = 0.52).

The severe drought event in 2014 had profound impacts on bee assemblages that were, in many cases, more acute than the impacts of habitat loss and fragmentation. Thus, future conservation efforts aimed at preserving at-risk bee populations and maintaining available pollination services may need to focus on mitigating the impacts of climate change at least as much as those of habitat loss. More long-term monitoring of bee assemblages spanning drought events of differing durations will be necessary to fully appreciate the potentially diverse responses of different bee species to the challenges brought about by drought and its impacts on the biotic and abiotic environment. The ability to better predict shifts in the activity and population dynamics of bee assemblages in response to extreme climate events will be helpful in guiding efforts to conserve the bee taxa that are most sensitive to the joint impacts of drought and habitat fragmentation in our system and other hotspots of bee diversity threatened by similar pressures. 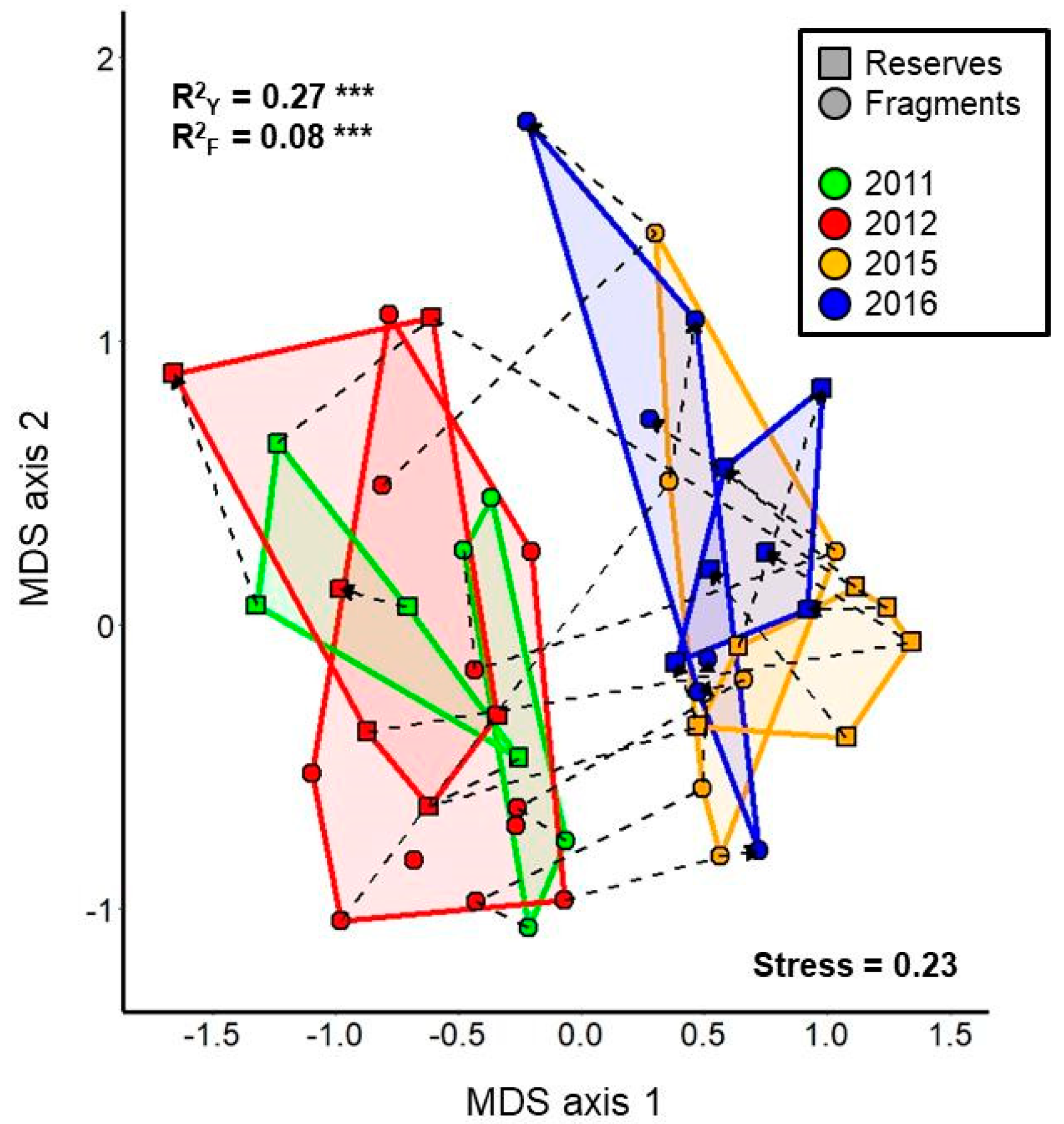