Identification of Autophagy-Related Genes in the Potato Psyllid, Bactericera cockerelli and Their Expression Profile in Response to ‘Candidatus Liberibacter Solanacearum’ in the Gut
Next Article in Special Issue

Experiments were conducted at the Clay Lyle Entomology Complex in Starkville, MS, in 2014 and 2015 to determine the response of tarnished plant bug nymphs to selected insecticides representing the organophosphate, carbamate, pyrethroid, neonicotinoid, insect growth regulator, sulfoxamine, and pyridine carboxamide classes. These experiments were conducted using third-instar nymphs from a laboratory-reared colony at Mississippi State University, originally reared in 2005. The initial colony was collected from weedy hosts in Mississippi and was supplemented periodically via feral populations collected in Mississippi over time. Prior to initiation of the study, nymphs were reared on semi-solid oligidic diet packs that contained blended whole chicken eggs, sterile water, sugar, Brewer’s yeast, 50% honey solution, and a 10% acetic acid solution [22] that also included fumagillin at 33.6 ppm [23]. The colony was maintained on a 14:10 L:D cycle at 27 °C and 70% humidity. Twenty nymphs were aspirated into 1.5 mL scintillation tubes. Green beans (Phaseolus vulgaris L.) were washed in a 5% sodium hypochlorite bath for 5 min, rinsed with clean water, and placed under a vent hood to dry. Green bean pods were then cut into 1.27 cm long sections and submerged into mixtures of insecticides for 3 seconds using a stainless steel mesh strainer. After treatment, the green bean pieces were placed on paper towels and allowed to air dry. Each insecticide was mixed in separate 4.64 L stainless steel sprayer tanks with concentrations calculated based on 112 L per ha spray volume.
The insecticides and mix rates tested included imidacloprid (Admire® Pro, Bayer Crop Science, Raleigh, NC, USA) at 7.4 mL a.i. per ha, thiamethoxam (Centric®, Syngenta Crop Protection, Inc., Greensboro, NC, USA) at 13.6 g a.i. per ha, sulfoxaflor (Transform WG™, Dow AgroSciences, Indianapolis, IN, USA) at 8.6 g a.i. per ha, acephate (Orthene 90S WSP, Valent USA, Walnut Creek, CA, USA) at 148.6 g a.i. per ha, oxamyl (Vydate® C-LV, DuPont Crop Protection, Wilmington, DE, USA) at 52.3 g a.i. per ha, bifenthrin (Brigade® 2EC, FMC Corporation, Princeton, NJ, USA) at 18.3 mL a.i. per ha, permethrin (Ambush®, AgNova Technologies, Box Hill North Vic, Australia) at 36.7 mL a.i. per ha, flonicamid (Carbine™ 50WG, FMC Corporation, Wilmington, DE, USA) at 16.3 g a.i. per ha, novaluron (Diamond® 0.83EC, ADAMA USA, Raleigh, NC, USA) at 57 mL a.i. per ha, and water for an untreated control.
The assay arenas consisted of individual 245 mm square polystyrene bioassay dishes (Corning™ Product Number 431272, Corning, NY, USA) that were divided into four quadrants. Five green bean pieces were placed into each quadrant for a total of 20 green bean sections per dish. Two of the quadrants contained treated green beans, and the other two quadrants contained untreated green beans. Green bean pieces were randomly assigned (treated or untreated) to each quadrant within each replication. Twenty green bean sections were chosen to allow for a 1:1 ratio of green bean host substrate to tarnished plant bugs to ensure that there were enough green beans to host the tarnished plant bugs and minimize crowding. Assays were conducted a total of seven times over the 2-year period, but not all insecticides were evaluated at every assay. Insecticides were grouped based on IRAC MoA chemical sub-group or exemplifying active ingredient (Table 1). In each assay, treatments were replicated four times, with one dish per replication for a total of four dishes per treatment. Tarnished plant bugs were emptied from the scintillation tubes in the center of the dishes, attempting to avoid placing them closer to the treated or untreated green beans. The dishes were wrapped in parafilm to ensure no tarnished plant bugs were able to escape. The dishes were checked at intervals of 1 h, 4 h, 8 h, and 24 h, and the location (treated or untreated green bean sections and/or quadrant) of dead and live tarnished plant bugs was recorded. Tarnished plant bugs that were found dead were not included in the analysis because they did not have the option to move throughout the area.

The proportion of live tarnished plant bug nymphs on treated green beans (or their quadrants) was calculated at each rating for each insecticide. Data at the 24 h rating was analyzed with a general linear mixed model analysis of variance for repeated measures [24]. Insecticide class was designated as a fixed effect in the model; time was the repeated term. Test and replication nested within the test were designated as random effects in the model. Degrees of freedom were estimated using the Kenward-Roger method [25]. Means were estimated using LSMEANS and separated based on Fisher’s protected least significant difference (α = 0.05). Additionally, the relationship between the proportions of tarnished plant bug nymphs on treated green bean pieces over time was analyzed with regression analysis for each insecticide and insecticide class.

This project was funded by Cotton Incorporated #11-832MS.

We wish to thank Beverly Catchot, Emily Jacks and Lauren Sanders for their help with insect rearing. 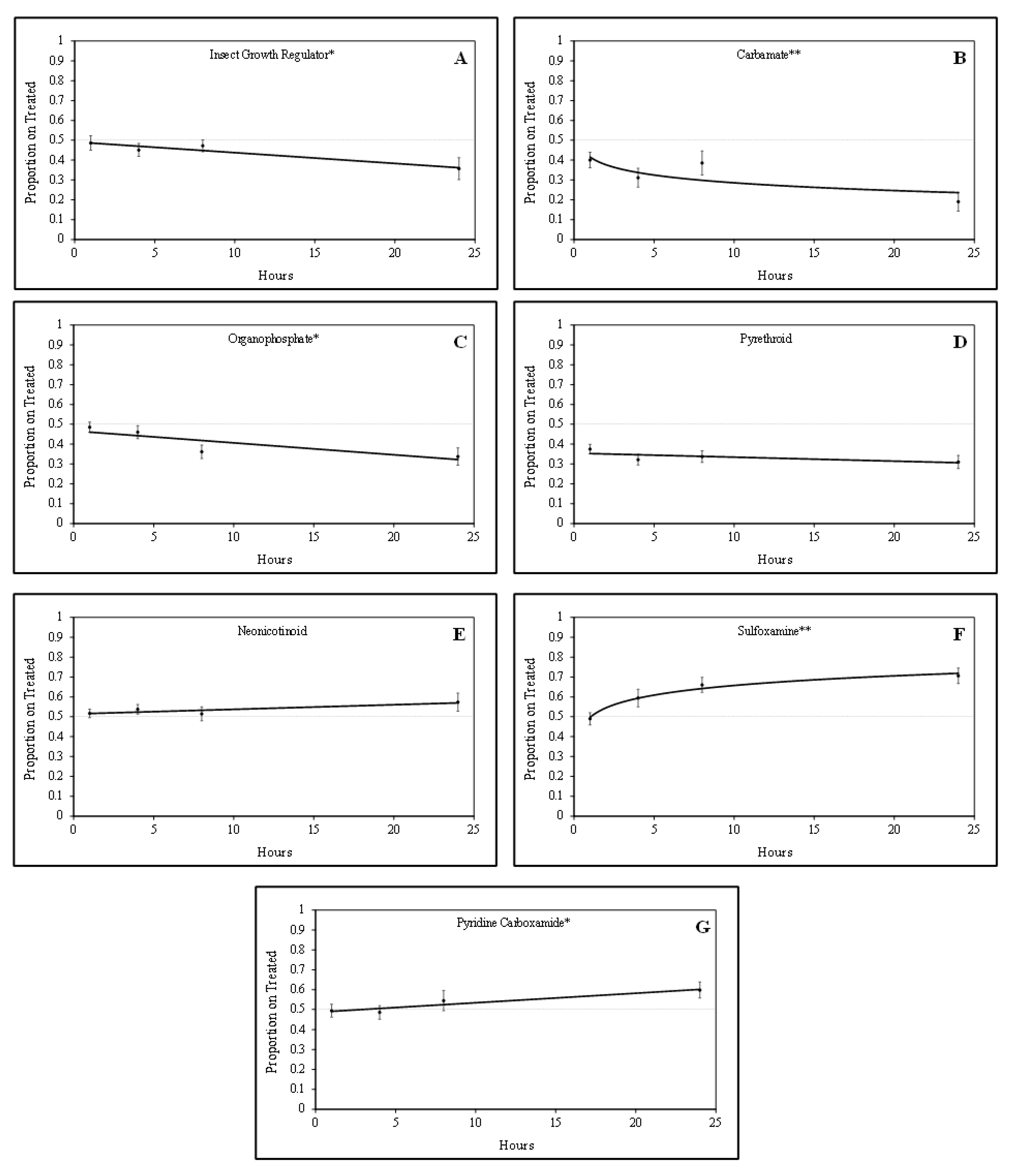