The tomato potato psyllid (TPP), Bactericera cockerelli, is a psyllid native to North America that has recently invaded New Zealand and Australia. The potential for economic losses accompanying invasions of TPP and its associated bacterial plant pathogen Candidatus Liberibacter solanacearum (CLso), has caused much concern. Here, we employed ecological niche models to predict environments suitable for TPP/CLso on a global scale and then evaluated the extent to which global potato cultivation is at risk. In addition, at a finer scale the risk to the Australian potato acreage was evaluated. A total of 86 MaxEnt models were built using various combinations of settings and climatic predictors, and the best model based on model evaluation metrics was selected. Climatically suitable habitats were identified in Eurasia, Africa, South America, and Australasia. Intersecting the predicted suitability map with land use data showed that 79.06% of the global potato cultivation acreage, 96.14% of the potato production acreage in South America and Eurasia, and all the Australian potato cropping areas are at risk. The information generated by this study increases knowledge of the ecology of TPP/CLso and can be used by government agencies to make decisions about preventing the spread of TPP and CLso across the globe. View Full-Text
Keywords: climate niche; early detection; insect–pathogen complex; invasive pests; landscape structure; potential distribution; risk assessment climate niche; early detection; insect–pathogen complex; invasive pests; landscape structure; potential distribution; risk assessment
►▼ Show Figures 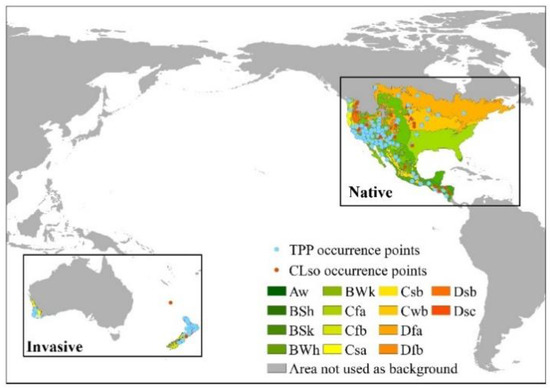