CREB-binding protein (p300/CBP) is a universal transcriptional co-regulator with lysine acetyltransferase activity. Drosophila melanogaster p300/CBP is a well-known regulator of embryogenesis, and recent studies in beetles and cockroaches have revealed the importance of this protein during post-embryonic development and endocrine signaling. In pest insects, p300/CBP may therefore offer a useful target for control methods based on RNA interference (RNAi). We investigated the role of p300/CBP in the pea aphid (Acyrthosiphon pisum), a notorious pest insect used as a laboratory model for the analysis of complex life-history traits. The RNAi-based attenuation of A. pisum p300/CBP significantly reduced the aphid lifespan and number of offspring, as well as shortening the reproductive phase, suggesting the manipulation of this gene contributes to accelerated senescence. Furthermore, injection of p300/CBP dsRNA also reduced the number of viable offspring and increased the number of premature nymphs, which developed in abnormally structured ovaries. Our data confirm the evolutionarily conserved function of p300/CBP during insect embryogenesis and show that the protein has a critical effect on longevity, reproduction and development in A. pisum. The potent effect of p300/CBP silencing indicates that this regulatory protein is an ideal target for RNAi-based aphid control. View Full-Text
Keywords: KAT3; CREB-binding protein; RNA interference; senescence; life-history traits; nejire KAT3; CREB-binding protein; RNA interference; senescence; life-history traits; nejire
►▼ Show Figures 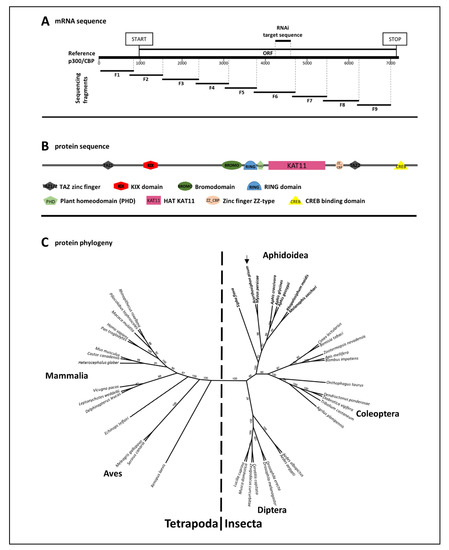