Larvicidal, Ovicidal, Synergistic, and Repellent Activities of Sophora alopecuroides and Its Dominant Constituents Against Aedes albopictus

Where Have All the Spiders Gone? Observations of a Dramatic Population Density Decline in the Once Very Abundant Garden Spider, Araneus diadematus (Araneae: Araneidae), in the Swiss Midland

Aerial web-spinning spiders (including large orb-weavers), as a group, depend almost entirely on flying insects as a food source. The recent widespread loss of flying insects across large parts of western Europe, in terms of both diversity and biomass, can therefore be anticipated to have a drastic negative impact on the survival and abundance of this type of spider. To test the putative importance of such a hitherto neglected trophic cascade, a survey of population densities of the European garden spider Araneus diadematus—a large orb-weaving species—was conducted in the late summer of 2019 at twenty sites in the Swiss midland. The data from this survey were compared with published population densities for this species from the previous century. The study verified the above-mentioned hypothesis that this spider’s present-day overall mean population density has declined alarmingly to densities much lower than can be expected from normal population fluctuations (0.7% of the historical values). Review of other available records suggested that this pattern is widespread and not restricted to this region. In conclusion, the decline of this once so abundant spider in the Swiss midland is evidently revealing a bottom-up trophic cascade in response to the widespread loss of flying insect prey in recent decades.
Keywords: bottom-up trophic cascade; low abundance; orb-weaving spiders; prey scarcity; western European landscape bottom-up trophic cascade; low abundance; orb-weaving spiders; prey scarcity; western European landscape

When the Krefeld Entomological Society, together with colleagues, published their famous long-term study (the “Krefeld study“) in 2017, it became known that the biomass of flying insects had declined by approx. 75% over the past three decades in over 60 nature protection areas of Germany [1]. Another long-term study (the “Munich study“) confirmed the Krefeld results, providing evidence that strong abundance declines of insect populations had occurred in farmland and forests across vast areas of Germany and Switzerland [2]. Similar abundance declines of insect populations have been documented in other long-term studies of other European and North American regions [3,4,5,6,7,8,9]. It is generally accepted that we now live in an era of global insect meltdown [9,10,11,12,13]. This has dramatic ecological implications: the fact that insects comprise the basis of many food chains and food webs [14,15] means that in a world without insects, countless insectivorous species will ultimately become extinct due to starvation [16].
In this context, aerial web-spinning spiders are a group of utmost interest. These spiders (including the orb-weaving species in the families Araneidae) trap flying insects with the aid of aerial webs [17,18,19]. In the temperate climatic zone, aerial web-spinning spiders feed for the most part on small dipterans, aphids, and hymenopterans (Figure 1), which are exactly the types of insects known to have most dramatically decreased in abundance and biomass in recent decades [1]. Aerial web-spinning spiders, because of their reliance upon flying prey, are therefore a highly vulnerable predator group in regions characterized by a high loss of flying insects, such as Germany and Switzerland.
While a larger number of studies on population declines of various groups of insects has been conducted in recent years (see references in [12]), potential cascading effects have only been documented so far for insectivorous birds [6]. No studies of this type have, to date, considered potential declines due to trophic cascades among arthropods, like aerial web-spinning spiders. Here we used the European garden spider Araneus diadematus as a model system to address whether evidence for population declines in aerial web-spinning spiders in the Swiss midland can be found (Figure 2). The female, 10–18 mm in length, reaches adulthood in late summer, at which time it spins (≈30 cm diameter) orbs [20,21,22]. The webs are built 0.5–2 m off the ground [21]. This animal, with its conspicuous white, cross-shaped mark on the upper side of the abdomen, is one of the best known spider species in western Europe.
By comparing historical abundance data (20th century) with present-day data (2019), we examined whether the abundance of Araneus diadematus has changed over the past few decades. This work is based on extensive experience gathered during graduate research in the Swiss midland in the 20th century [20,21] and supplemented by a present-day population density survey in the same geographical area. To make the comparison more robust, the data base was expanded by including published population density values extracted from the scientific literature.

2.1. Assessment of Population Densities of Araneus diadematus in 2019

Population density assessments were conducted at 20 locations in the Swiss midland, and the visual censusing technique described by Lubin (1978) [23] was applied at 18 locations. This technique was modified insofar as curved line transects were used in addition to straight line transects in some cases, depending on the paths used [24]. One of us (M.N.) slowly walked along the edge of a path and intensively searched by eye the vegetation within 1 m to one side of the path and from ground level to a height of 2 m (based on the fact that Araneus diadematus habitually constructs its webs at heights of 0.5–2 m off the ground [21]). Each adult Araneus diadematus web encountered within the transect was recorded. Transects 1 to 5 were 1000 m long, Transects 6 to 10 were 500 m long, and Transects 11 to 18 were 200 m long (see Table S1; transect lengths depended on the nature of the landscape). The search focused on webs of adult females in habitats typical for this species (i.e., gardens, parks, graveyards, hedgerows, forest edges, and forest trails; [25]). Only webs occupied by a spider were counted (regardless whether the spider was present in the web or hiding in a nearby retreat), since only those webs could be counted beyond any doubt as belonging to Araneus diadematus. All counts were conducted on rain-free afternoons in August and September 2019. It has been suggested in the literature that spider counts obtained using this method may result in underestimating the true population densities because of the spiders’ cryptic lifestyles [26]. This might well be the case if densities of well-camouflaged, nocturnal, and/or small, immature spiders are included in the assessment [26]. However, in the case of Araneus diadematus, a bias of this type is highly unlikely because this is a species of which the adult females construct large, conspicuous webs which are unlikely to be overlooked by a keen observer. Lubin (1978) also stated that “….Visual censusing is an effective technique when applied to animals with conspicuous artifacts, such as most web spiders” [23]. The immature stages of Araneus diadematus are more likely to be overlooked with this method because their smaller-sized webs are less conspicuous; however, in the current study this objection was not relevant because immature spiders were not counted.
Additionally, web counts in two organic gardens, covering 330 m2 and 800 m2 ground area, respectively, were conducted. In these gardens, the vegetation and the exterior of the buildings were thoroughly searched for webs of adult female Araneus diadematus on several consecutive days in August and September 2019.

Araneus diadematus population density values assessed in the 1970s in the Zurich area were taken from two graduate research theses [20,21]. These were supplemented by data taken from the literature. Overall, a total of 12 reports (including 18 population density values) were gathered (see Table S1). In these studies, plots ranging from 17.5 to 3300 m2 in ground area were used for the assessment of Araneus diadematus densities (see Table S1).
It is noticeable that the present habitat distribution was different from the habitats studied in the past, e.g., no fallow grassland was studied in 2019. The fallow grassland areas used in the Swiss studies 40 years ago [21] have fallen victim to urbanization and could not be surveyed. However, Araneus diadematus is a habitat generalist, widely distributed over a large number of different habitat types. All the study areas used in the present density assessment (Table 1) represent habitat types in which this species is typically found, such as forested areas [25]. The past century’s spider density values for grasslands were not above that century’s overall mean value (Table 1), and according to Hänggi et al. (1995) [25], tree- and shrub-dominated habitats appear to provide the most suitable sites for construction of the webs of this species. This implies that omission of grassland habitats in the 2019 density assessment should not have compromised our investigation.

The data in Table 1 were tested for normality using the Shapiro–Wilk Test Calculator (http://www.statskingdom.com/320ShapiroWilk.html), and this revealed that the data did not follow a normal distribution. The Mann–Whitney U test was applied to examine whether spider densities in 2019 (N = 20) differed statistically significantly from those in the 20th century (N = 18). The same test was used to examine whether numbers of prey per web in 2019 and in the 20th century differed statistically significantly. Medians are followed by interquartile ranges (IQR). In the past, multiple estimates of spider densities were probably also not normally distributed but were summarized as a mean. In order to make comparisons with the historical data, we also calculated a mean from our new data (while at the same time acknowledging that this is not the ideal measure).

The drastic decline in the abundance of the orb-weaving spider Araneus diadematus over the past half-century documented in this study (Table 1) apparently reveals a bottom-up trophic cascade in response to the widespread insect losses that have occurred across large parts of Europe in recent decades [1,2,4,6,9,39,67,68]. There is evidence that other groups of aerial web-spinning spiders, which likewise depend on flying insects as food [17,18,19,21,69,70,71], have also become much rarer over the recent past (Nyffeler, pers. observations). So, for instance, the mesh-web weaver Dictyna uncinata (together with other dictynid species), whose small, tangled webs were found in large numbers on the leaves of garden plants a few decades ago [71], has apparently become very rare these days (Nyffeler, pers. observations). The ongoing abundance decline of the spiders parallels the dramatic abundance declines in other insectivorous animals such as insectivorous birds, bats, frogs, and lizards documented in recent decades [72,73,74].
To sum up, the findings of this study support the notion by other researchers that we now live in the midst of an ecological crisis in which trophic webs are being eroded and degraded as a result of adverse, man-made environmental impacts [13,67,73,75,76]. If this disastrous trend cannot be halted or even reversed in the very near future, “entire ecosystems will collapse due to starvation” [16].

The following are available online at https://www.mdpi.com/2075-4450/11/4/248/s1, Table S1: Area size (m2) of the study plots, Table S2: Mean number of prey per web counted in mid-afternoon as a proxy for the daily prey capture rate of large orb-weaving spiders in western European habitats: Historical values vs. present day values.

This research was in part supported by the Swiss National Science Foundation (grant to G. Benz, Swiss Federal Institute of Technology Zurich) in as far as it refers to 20th century spider density assessments.

The authors wish to extend their gratitude to Rätus Fischer and Christlinde Ruchti for assistance in the field. We also thank two anonymous reviewers for their valuable comments. One of the authors (M.N.) also wishes to thank Georg Benz, Swiss Federal Institute of Technology Zurich, for his past support. 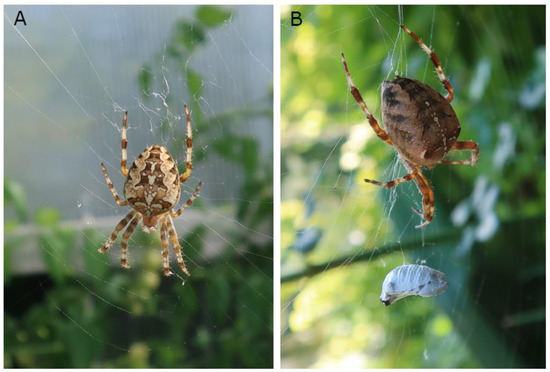