Insight into the Functional Diversification of Lipases in the Endoparasitoid Pteromalus puparum (Hymenoptera: Pteromalidae) by Genome-scale Annotation and Expression Analysis
Previous Article in Journal

The Chironomidae (Diptera) of Svalbard and Jan Mayen

This study was carried out at Ny-Ålesund on Spitsbergen in Svalbard (High Arctic). Eight study sites were established along a transect from the fjord to the snout of the glacier. The sites differed from each other by the type of vegetation cover and soil characteristics. Soil samples were collected and placed in Tullgren funnels. Extracted arthropods were represented by two groups of mites (Mesostigmata and Oribatida) and springtails (Collembola). The pioneer species that occurred first after retreat of the glacier were representatives of the Collembola (Agrenia bidenticulata and Hypogastrura concolor). Later, other springtails appeared including Folsomia alpha, Folsomia quadrioculata, Hypogastrura concolor, Isotoma anglicana, Sminthurinus concolor and the first species of oribatid mites; Camisia foveolata and Tectocepheus velatus velatus. Arthropod communities recorded along the transect were characterized by large variations in both species composition and abundance of individuals. The greater the distance from the glacier snout, the greater the species richness (2 to 22 species). The mean number of species per sample was the lowest at site 8 (1 ± 0.71) (the closest to the glacier) and greatest at site 1 (14 ± 1.41) (furthest from the glacier). The Simpson’s diversity index (D) was distinctly greater at sites 1 (4.61 ± 0.06) and 3 (3.94 ± 0.11) than at other sites, especially site 8 (1.07 ± 0.06). Densities were least in the samples closest to the glacier (30 to 101 individuals; density 3000–10,100 individuals/m2). At the other locations, abundance was highly variable (905 to 7432 individuals; density 90,500–743,200 individuals/m2). The mean abundances were greatest at sites 2 and 3. The great variations in total abundances observed were often due to the presence or absence of one or more dominant species exhibiting extreme abundance variability between sites. The microarthropod community of the High Arctic is composed of heterogeneous circumpolar species, yet on a landscape scale is extremely dependent on local environmental conditions which may be subject to rapid change.
Keywords: species richness; colonisation; community assembly; dispersal; succession; Spitsbergen species richness; colonisation; community assembly; dispersal; succession; Spitsbergen

Succession is most simply defined as species change over time [1]. Primary succession is the assembly of ecosystems on barren landscapes following severe disturbances that leave little or no biological legacy (e.g. lava flows, landslides and mine wastes). The assembly process involves colonization of newly exposed substrates and subsequent interactions between the colonizing plants, animals and soil microbes [2].
Community properties, such as species richness and diversity, should change as primary succession progresses [3]. Theory and observations suggest two major patterns of species diversity through succession [4]: diversity can first increase and then decrease asymptotically through succession [5]—this pattern of increasing richness and diversity is very common in early primary succession [6] and has been observed on volcanoes [7] and glacier forelands [8,9]. However, as biomass and cover increase in later succession, competitive dominance can lead to declines in richness and diversity [10]. According to the second pattern, there is a peak in diversity at an intermediate stage of succession, which has been observed in both secondary [4] and primary succession [6].
Glacier- forefields provide a unique opportunity to observe the phenomenon of primary succession [11] and several studies on the botanical aspects of glacial retreat exist [12,13]. A prime hypothesis is that the initial nitrogen fixing colonizers determine the initial establishment of late-successional dominants and that other possible causes of successional change need not be invoked [14]. Glacier forelands have been studied extensively with regard to plant succession reviewed by Matthews [6], while the structure of heterotrophic communities during the colonization of deglaciated areas were not recognized until recently [15,16]. The succession of mite species on glacier forelands is also poorly known, as only a few studies have been published [17,18,19].
In recent, years a number of taxonomic studies on the arthropod fauna of the Svalbard archipelago have appeared [20]. Several describe new species [21,22], whereas others relate to the revision or redescription of species [23,24]. Studies of faunistic and ecological nature exist [25,26,27], but few papers refer to the differentiation of communities across a glacial foreland [16,18,28,29].
The main aim of this study was to describe the changes occurring alpha and beta diversity after glacial retreat contributing to the understanding of primary succession in post-glacial areas and colonization processes more generally.

To investigate colonization rates, a consequence approach was employed. Here the arthropod communities are examined along a transect originating at the snout of a retreating glacier and perpendicular to the glacier. Under the assumption that the glacier is retreating then increasing distance from the snout equates to increasing time since release from the ice. Sites laying further from the glacier therefore are older than sites close to the snout and have a longer colonization history.

The soil samples were maintained cool and returned from Ny-Ålesund to the University Centre in Svalbard (UNIS) in Longyearbyen. The samples were placed in Tullgren funnels within 24 hours after collection and extracted for 72 hours until fully dry. The mesofauna was extracted into, and stored, in 96% alcohol. After sorting, slides of the mesostigmatic mites and springtails were prepared using Hoyer’s solution. All oribatid mite measurements were performed on specimens cleared in pure lactic acid and mounted in cavity slides. Identification of oribatid mites to species was based Ghilarov and Krivolutsky [32], Colloff [33], and Weigmann [34]. The classification of Weigmann [34] was followed. Specimens were classified to species under either a light microscope (Zeiss Axioskope 2) or a binocular microscope. All material is deposited in various reference collections at the Department of Arctic Biology, UNIS, Norway, Cardinal Stefan Wyszyński University, Poland (Collembola), Poznan University of Life Sciences, Poland (Mesostigmata), or the University of Silesia, Poland (Oribatida).
To describe the arthropod communities, indices were estimated for each location: diversity; (Simpson’s diversity index (D) and Pilou evenness (Evenness index, E = Shannon diversity index /ln [Richness, S]). The species abundance was established by determining the number of individuals of each species from each sample.
Statistical approaches widely used in ecological studies, principal coordinates analysis (PCoA), cluster analysis, and indicator species analysis were also performed to explore compositional variation between the samples. Wisconsin double standardization was undertaken before performing the analyses. A linear regression was performed to show biodiversity changes dependent on the distance from the glacier, and hence time, revealed by the Simpson’s index. Cluster analyses were conducted in STATISTICA, using the Ward’s method with Manhattan distances. The PCoA, indicator species were calculated using R [35,36,37].

Forty samples from eight study sites were analyzed. The surfaces closest to the glacier, sites 7 and 8, yielded the fewest individuals (30 to 101; density 3000–10,100 individuals/m2) (Table 1). At the other study sites, the densities were very variable (905 to 7,432 individuals; density 90,500–743,200 individuals/m2). The mean abundances were greatest at sites 2 (1486.4 ± 2698.6) and 3 (1010 ± 967.1).
The total number of species collected varied from 2 (site 8, close to the glacier snout) to 22 (site 1, farthest away from the glacier) (Table 1). The mean number of species per sample was the least at site 8 (1 ± 0.71) and greatest at site 1 (14 ± 1.41). The Simpson’s diversity indices (D) were distinctly greater at sites 1 (4.61 ± 0.08) and 3 (3.94 ± 0.11) than at other sites, especially site 8 (1.07 ± 0.06). D for the last site indicates the very small diversity (close to one where one indicates low species diversity). Finally, the evenness indexes (E) were the greatest at sites 7 (0.7707) and 1 (0.6277) and the least at sites 8 (0.2108) and 2 (0.2452), while the dominance was greatest at site 8 (0.9356).
The species composition and structure of the analyzed arthropod communities were different for each study site. From site 8 (in front of the glacier), only two species of springtails were found, Hypogastrura concolor (Carpenter, 1900) and Agrenia bidenticulata (Tullberg, 1876). At sites 7 and 6, the number of species was greater (7). As the distance from the glacier front increased, the number of species in the samples grew, up to 22 at site 1 (the most distant from the snout of the glacier and the oldest land surface). The community structure also differed across the transect. For example, at site 7 the most numerous species were Isotoma anglicana Lubbock, 1862, H. concolor and Folsomia quadrioculata (Tullberg, 1871), at site 4 the most numerous were H. concolor, Liochthonius laponicus (Trägårdh, 1910) and Diapterobates notatus (Thorell, 1871), while F. quadrioculata, H. concolor and Hermannia reticulata Thorell, 1871 were most dominant at site 1 (Appendix A).
Cluster analysis of pooled samples shows the high similarity of species diversity between sites 4 and 5 as regards occurrence and abundance of species. The sites 3 and 2 are quite similar to 4 and 5, but the outlaying sites are 8, 1 and 7 (Figure 2). Collembola occur at all the sites, while Oribatida do not occur at site 8, and no Mesostigmata occurred at sites 7 and 8. At site 1, there are the greatest number of species.
The species richness of the sample grows as the distance from the glacier increases (equivalent to increasing land surface age) (Figure 3), as expressed by both the number of species and the mean Simpson diversity coefficient. The linear regression analysis produced the function y = 1.6863* x + 1.4779 (* = significance of regression coefficients at < p = 0.05, x = distance from the glacier [m], y = Simpson’s coefficient), with a determination coefficient of R2 = 68%. Moreover, the Mantel test was used to compare two matrices: Bray Curtis similarities and geographical distances between sites. r = 0.174 and p = 0.004, indicate that the correlation between these two matrices is significant and that therefore the abundance and occurrence of species depend on distance (site age) from glacier.
Ordination (PCoA) was performed directly on the full (for all samples) dissimilarity matrix (Bray–Curtis on double Wisconsin standardization data) and, although a pattern may be discerned in the differences between assemblages from different sites, there is a great deal of overlap (Figure 4). However, this figure supports the result from the cluster analysis. Sites 1 and 8 are outliers and site 7, although dispersed relative to the vertical axis, is located further to the right of the other sites relative to PCoA1 and sites 4, 5, 3, 2 fall out together. A PERMANOVA analysis (using adonis function) comfirms that effects of sites centroids differ significantly (Table 2). Multivariate dispersions are homogeneous (Permutation test p = 0.177), thus the assumption of premutation test is fulfilled.
The indicator species analysis for pooled samples at the sites identifies 12 species whose groupings distinguish the different sites or groups of sites from each other. Site 1 is distinguished by four species: Oppiella (Moritzoppia) neerlandica (Oudemans, 1900) (only one individual outside site 1), Hermannia (Heterohermannia) reticulata Thörell, 1871 (occurs only at this site), Arctoseius haarlovi Lindquist, 1963, and Oligaphorura ursi (Fjellberg, 1984)(occurs only in site 1, site 2), Friesea quinquespinosa Wahlgren, 1900(only three individual outside site 2), site 3 by Camisia (C.) dictyna, site 5 by Diapterobates notatus (Thorell, 1871), and site 8 by Agrenia bidenticulata (Tullberg, 1876)(occurs only in this site). The homogenous groups were sites 2 and 3 distinguished by Arctoseius multidentatus, 2 and 6 by Tectocepheus velatus velatus (Michael, 1880), 3 and 4 by Liochthonius (L.) lapponicus, and 3 and 6 by Camisia (C.) foveolata Hammer, 1955 (Table 3). Although the groups are not the same as in the cluster analysis, the indicator species analysis showed similarities between pairs of sites forming one cluster, additionally indicating the species that are most abundant in a given group.

Microarthropod species diversity and abundance increased with increasing distance from the glacier (and time since release from the retreating glacier), mirroring the changes observed in moss and vascular plants diversity and coverage.
Low abundances of microarthropods occurred at the site closest to the glacier snout where vegetation had not become established.
Features of the microarthropod communities (e.g. number of species per sample) were related to site age and plant communities, and varied greatly between transect sites.
Microarthropod species observed were largely generalist circumpolar species, with few endemic or regionally restricted species.
Arctic microarthropod communities can vary greatly across small scale local distances, even when -composed of generalist species with wide circumpolar distributions.
Broadscale generalisations of the distribution of the Arctic microarthropod communities need to take small-grain habitat variation into consideration.

The fieldwork was funded via Norwegian Research Council project AVIFauna (6172/S30) and internal funding to SJ Coulson from the University Centre in Svalbard (UNIS).

The Governor of Svalbard (Sysselmannen på Svalbard) is acknowledged for providing permission for the fieldwork. 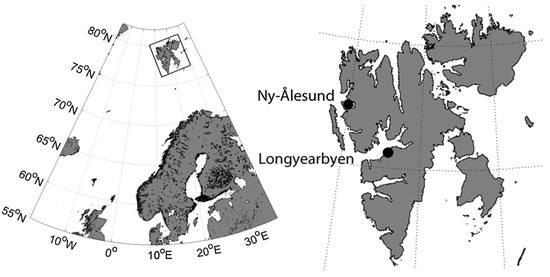 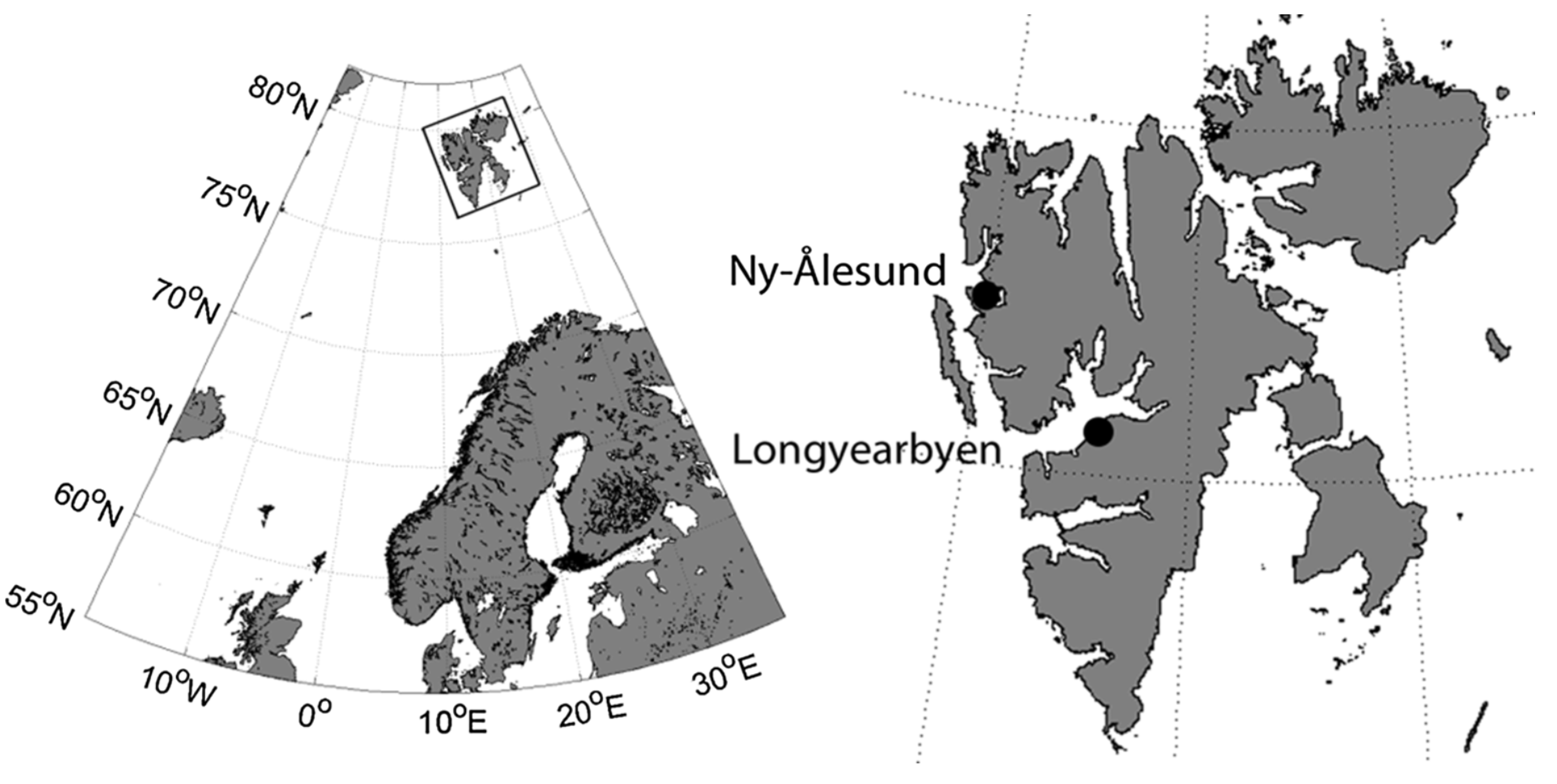 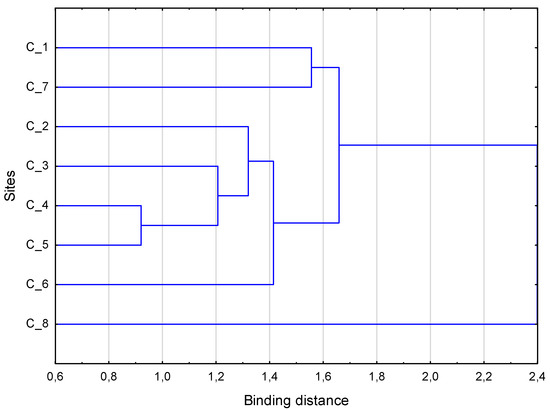 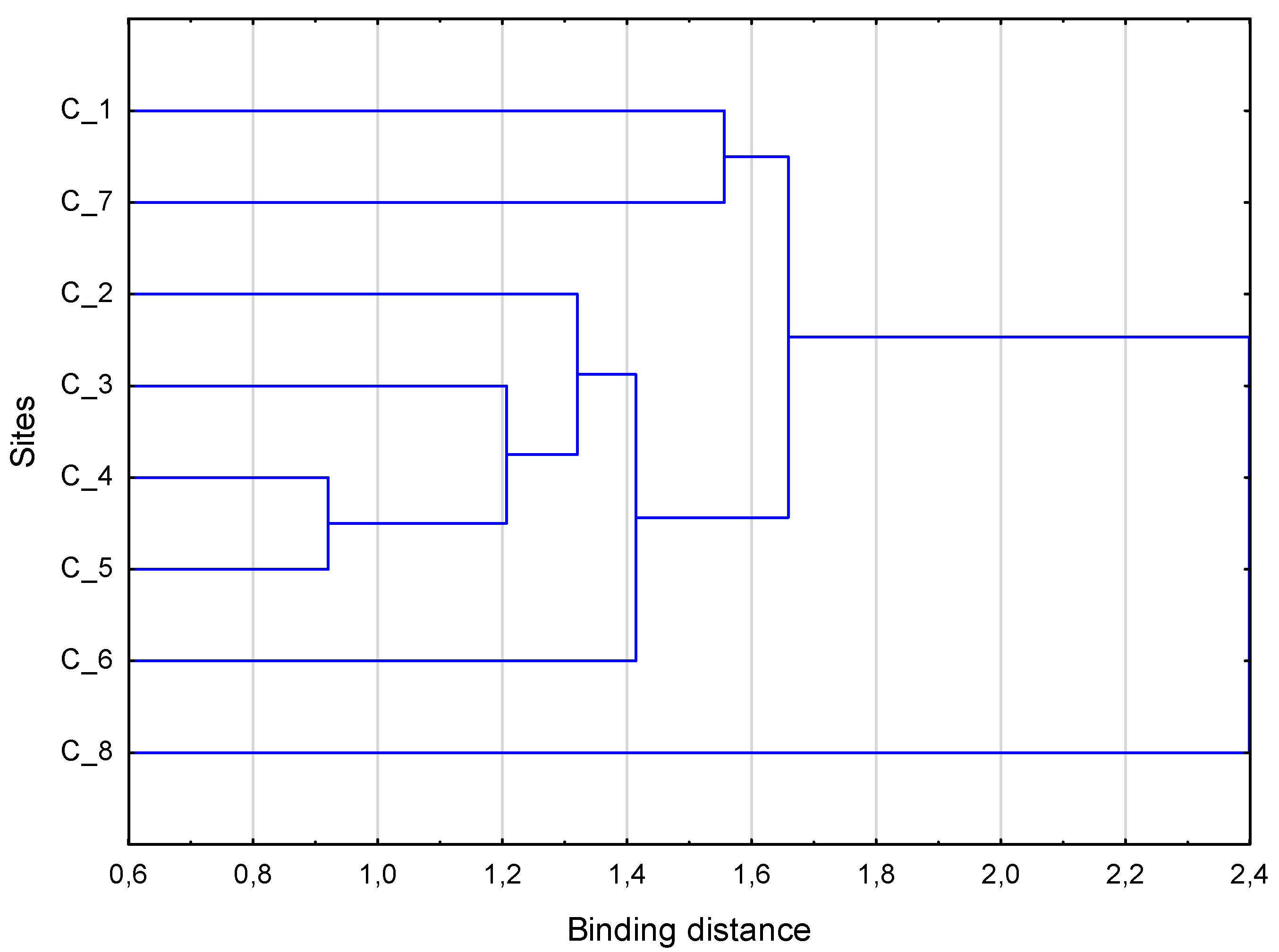 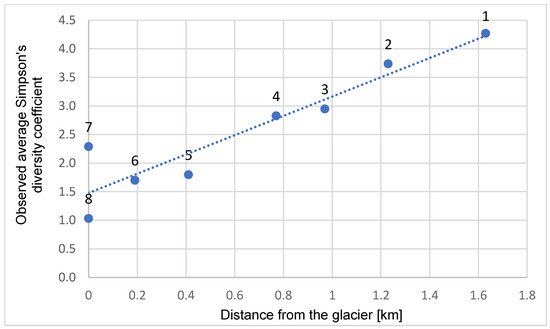 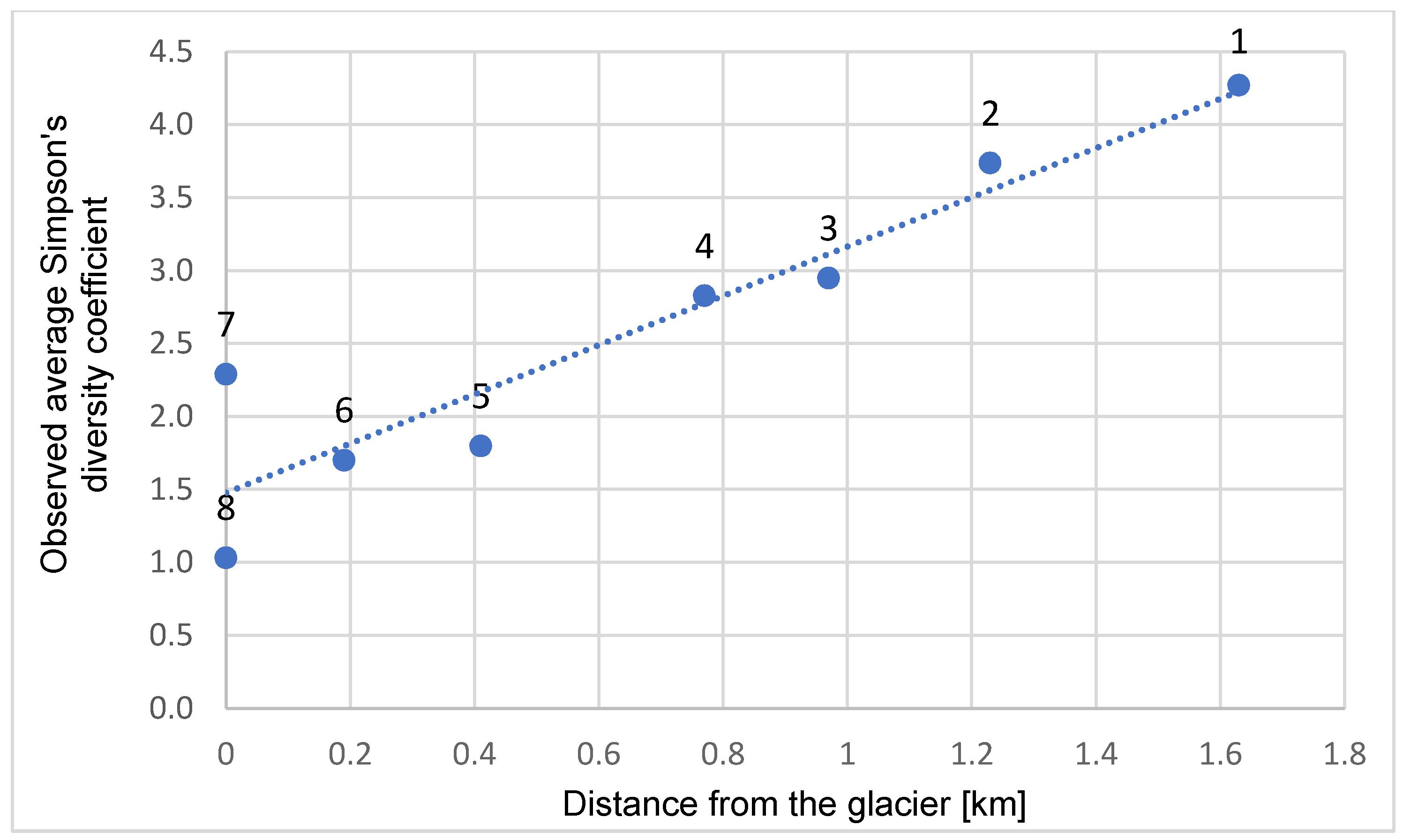 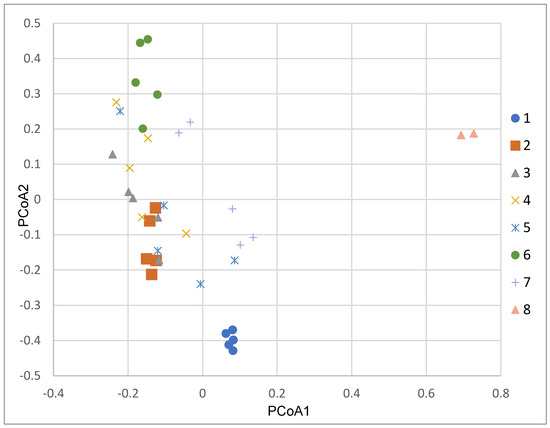 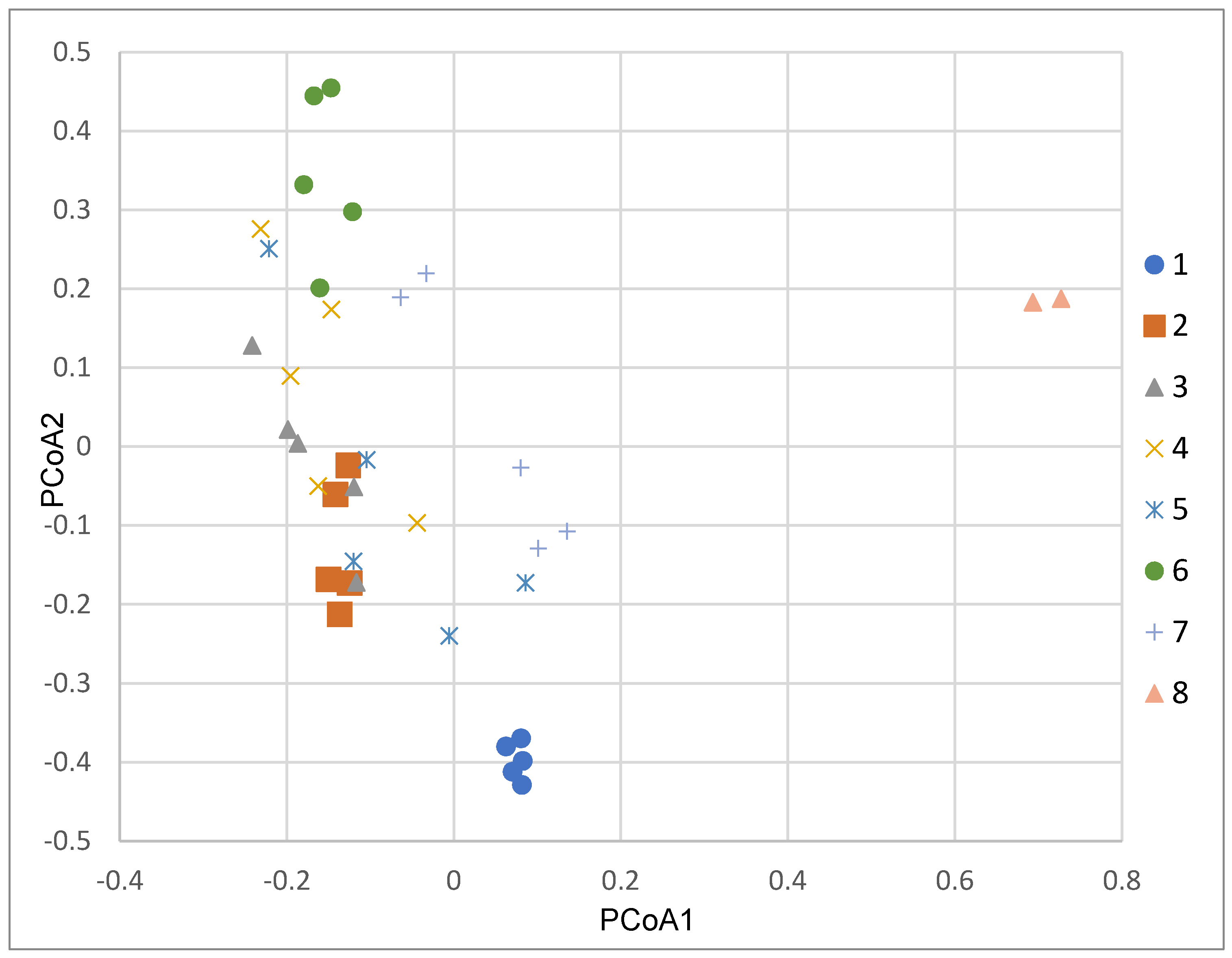