Busseola fusca (Fuller; Lepidoptera: Noctuidae) is an important pest of maize in Africa and can be effectively controlled by Bt maize. However, the sustainability of this technology is threatened by resistance evolution, which necessitates the implementation of the high-dose/refuge insect resistance management (IRM) strategy. Despite the success of this IRM strategy, it is based on several assumptions about insect-hostplant interactions that are not always valid for different pest species. In this study, the plant abandonment behavior of Cry1Ab-resistant and susceptible B. fusca larvae were evaluated on a non-Bt, single toxin (Cry1Ab), and a pyramid event (Cry1.105 + Cry2Ab2) of maize over a four-day period. The aim was to determine if larvae are more likely to abandon maize plants that contain Bt-toxins than conventional non-Bt plants, and if resistance to the Cry1Ab-toxin affects this behavior. This study found that both Bt-resistant and susceptible B. fusca neonate larvae show feeding avoidance behavior and increased plant abandonment rates when exposed to Bt maize leaf tissue. The implications of these findings for the design of IRM strategies and choice of refuge structures are discussed in the context of Bt maize in Africa. View Full-Text
Keywords: Busseola fusca; larval migration; Bt maize; insect resistance management; insect behavior Busseola fusca; larval migration; Bt maize; insect resistance management; insect behavior
►▼ Show Figures 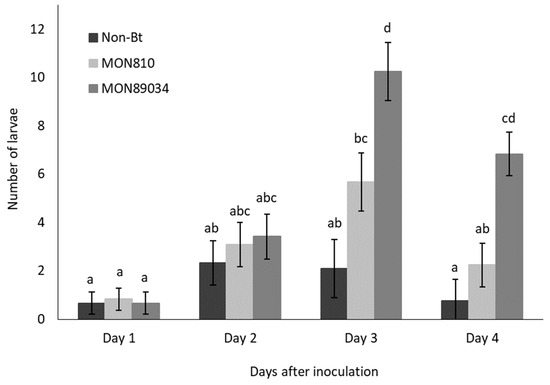