We collected pollen from 82 plant species and three bee species (Apis mellifera, Bombus impatiens, and Osmia cornifrons). Pollen collection involved multiple methods, which we classified as “fresh” (collected directly from dehisced anthers on flowers), “anther” (collecting anthers from flowers in the field and collecting pollen in the lab), “mass” (vacuuming pollen from flowers), or “bee collected” (from A. mellifera pollen traps, B. impatiens corbiculae, or O. cornifrons nest provisions; Table S2). Each plant species pollen was pooled from hundreds of flowers needed to collect sufficient pollen for analysis (> 10 mg). We further classified bee-collected pollen as “bee” if it was a mixed pollen sample collected from free-foraging bees (useful for evaluating bees’ P:L intake targets), or “plant” if it was monofloral pollen collected by honey bees from pollen traps (see Supplementary Protocol S1 for details on pollen collection methodology). To prevent nutrient degradation, we immediately stored all pollen at −20 °C or −80 °C until analysis (in the field, we placed pollen on ice and then stored it in the freezer upon return to the lab). Depending on the experiment, we either dried pollen at 36 °C for 24 h prior to analysis, lyophilized for 3 h (O. cornifrons), or analyzed the pollen fresh (see Table S2). For each pollen sample, three replicates of approximately 1 mg each were used for protein, and three replicates of approximately 1 mg each were used for lipid analyses. We used the same pollen protein and lipid analytical protocol detailed previously [9,18,19,20,50] (see Supplementary Protocol S1 for a step-based protocol).
For each plant and bee species, we calculated the average protein concentration (mean ± SE ug/mg) and average lipid concentration (mean ± SE ug/mg; Table S2) of the three subsamples of pollen (some species included multiple treatments/populations: Carduus nutans, Chamaecrista fasciculata, Cistus spp., Helianthus annuus, Salix caprea, Solidago altissima). Because honey bees add nectar to pollen, which changes the nutrient concentrations per weight [55], we treated any repeated plant species that we collected from honey bees as separate samples. We determined the pollen P:L values of plant species by dividing the average protein by average lipid concentration; for bee species, we averaged the P:L values across all pollen loads (Table S2). To visualize the nutritional distribution of plant species, we plotted mean ± SE protein and lipid concentrations (Figure 1). We plotted nutrient P:L “rails” [48], which represent a constant nutritional ratio that exists alongside a range of specific nutrient concentrations (Figure 1). To visualize taxonomic trends in P:L values, we determined the mean ± SE P:L (when available) value for each plant family (Figure 2). We included bee species average P:L values to visualize where and how they differ in nutritional space (Figure 1 and Figure 2).

Pollen species and bee-nutrition values occupy a wide range of concentrations and ratios (Figure 1, Table S2). Previous analyses of pollen nutrients ranged from approximately 2% to 60% protein and 1% to 20% lipids [17,22], or 7% to 50.8% protein and 0.48% to 17.6% lipid [54]. Our data are similar; from fresh collected pollen, species concentrations ranged from 1.5% to 48.4% protein and 1.2% to 24.6% lipid. The resulting range of P:L ratios across our mostly bee-pollinated plant species was 0.13–13.3 P:L. Neither nutrient was exclusively associated with pollen P:L values, with protein content positively and lipid content negatively correlated to P:L value (generalized linear model: X2 = 113, P < 0.0001). Notably, the majority of the plant species and families we analyzed fall within P:L ratios < 3:1, exhibiting a median of approximately 1.7:1 and mean of approximately 2.5:1 P:L (Figure 1 and Figure 2). These results support the hypothesis that there are physiological, ecological, and phylogenetic limits on pollen nutritional values [17,54]. Perhaps the requirements of producing and depositing other pollen components (exine, intine, sugars, water, which can add up to 50% of pollen weight [22]) limit plants from increasing concentrations of protein and lipid without increasing all other components. The interactive costs of producing various nutrients may lead to constraints on nutrient concentrations available to pollinators (i.e., the tradeoff between pollen functions of reproduction and reward [17,54]).
Our analysis suggests that the P:L ratio is biologically and ecologically informative, and that it is also a robust metric across different collection methods. For instance, as mentioned above, corbiculate bees add nectar to pollen, reducing the absolute concentrations of protein and lipid nutrients per weight. Nevertheless, our analysis identified the P:L ratios of this bee-collected pollen as being nearly the same as the pollen collected directly from flowers (see Table S2). This is likely because both protein and lipid concentrations are being equally affected; thus, the ratios remain stable. Similarly, drying pollen prior to analysis, rather than analyzing it completely fresh, will concentrate nutrients and change nutritional content per unit mass. Yet, our results suggest that P:L ratios were again comparatively similar (Table S2), which should allow for consistent comparisons among species. Our analysis of both honey bee collected monofloral pollen and dried pollen fit within the general family level P:L ratios obtained from fresh pollen (e.g., average Asteraceae P:L of approximately 1:1 or high P:L values of Fabaceae; Figure 1, Table S2).
A recent meta-analysis of pollen nutrition revealed the evolutionary function of nutrient rewards by emphasizing the degree to which pollen nutrient content was conserved phylogenetically among plants mainly pollinated by bees [54]. Although our data revealed some similar family-level trends among P:L values, they are not completely congruent. Overall, the average P:L ratios among plant species and families in the meta-analysis tended to be much higher than our results. This difference could relate to the different chemical analytical protocols used across different studies compiled in the meta-analysis, while we used the same protocol to analyze all the species we studied. These differences illustrate a need in future studies to utilize standard methods to make comparisons across pollen nutritional datasets.

3.3. Applying Pollen P:L in the Future

When defining plant species by their nutritional value, we can more clearly build hypotheses regarding how floral pollen P:L rewards are conserved or vary within and among taxa, and then further deduce how this influences the ways that plants interact with their pollinators. Similarly, we can address the mechanisms that determine bees’ perception of P:L, identify their specific P:L intake targets, and ask how this influences their foraging behavior and fitness. These topics can be integrated to understand community interactions and address conservation. For example, we can study host-plant shifts of bees as their ranges cover areas of plant species turnover, discuss evolutionary shifts of pollinators to new host plants based on diet composition [85], and changes of floral mating systems to other insect or vertebrate pollinators. We can test how variations in the P:L values of pollen species affect bee physiology and health in the lab and field [20]; more sophisticated geometric framework studies [10] are clearly needed for different bee species. Pollen nutrition may also be important for understanding invasive ecology and responses to climate change [19,50,86,87]. For instance, introduced bees may adapt to new geographic regions by shifting to host-plant species with phylogenetically conserved pollen nutrition (Vaudo et al. in prep). We can also study hypotheses correlating nutritional drivers of declines of oligolectic, mesolectic, or polylectic bee species to landscape change through reduced floral diversity [1,2,3,5].
Datasets such as that presented here have a variety of uses in bee conservation and habitat restoration. We can select plant species for restoration and augment habitat in wild and agricultural ecosystems by creating nutritionally targeted plant lists [13]. One important insight from an exploratory dataset such as ours is that species diversity alone (i.e., many species within limited families) does not necessarily guarantee nutritional diversity, but selecting nutritionally diverse plant species leads to a diversity of plant families, phenotypes, and morphologies that would attract a diversity of bee species. The same concept can be used to target singular or specialized crop pollinating species. By providing enough nutritionally diverse and phenologically matched resources, we can support target bee species, and the surrounding bee community, by allowing populations to select and regulate their dietary intake [88].

Pollen nutrition likely plays an essential role in shaping pollinator communities. Although our research is focused mainly on bees, similar principles can be applied to other pollinators that consume pollen, such as flies, beetles, etc. As we have outlined in this study, we can make many inferences of how pollen P:L links broad patterns of pollinator species host-plant choice to differences in their nutritional intake, contributing to understanding how this may lead to coevolution between plants and pollinators. However, at this early stage of understanding the diversity of bee nutritional needs and plant species nutritional rewards, we have yet to experimentally test these ideas. Therefore, the utility of these types of datasets will increase as we populate them with tested values from a variety of plant and bee species so that we have a more comprehensive understanding of plant–pollinator communities. As we progress in the field, it is important to work toward unified protocols and collaborations so that we may have directly comparable results between studies for larger and more specific phylogenetic, geographic, and temporal inferences.

The following are available online at https://www.mdpi.com/2075-4450/11/2/132/s1, Protocol S1: Step based protocol for pollen collection and pollen protein and lipid analysis, Table S2: Table of plant and bee species mean and SE protein and lipid concentrations (ug/mg) and P:L ratios. Pollen collectors (and publications where available) are provided, and collection methods are described in Protocol S1.

A.D.V. developed the methodology, analyzed all pollen, and drafted the manuscript. C.M.G., A.S.L., J.F.T., and H.M.P. provided supervision. M.K.C. analyzed Osmia cornifrons pollen. M.H. assisted in pollen extraction and analysis in the lab. M.C. assisted in data visualization. All other authors collected and provided pollen for analysis and critically reviewed the manuscript (see Table S2 for specific contributions). All authors have read and agreed to the published version of the manuscript. 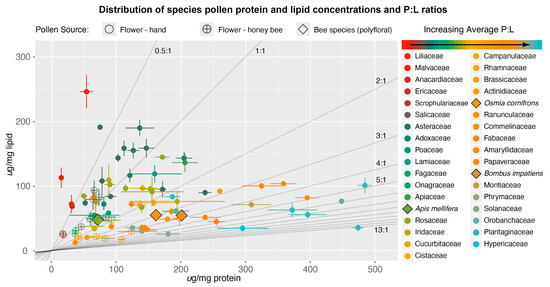 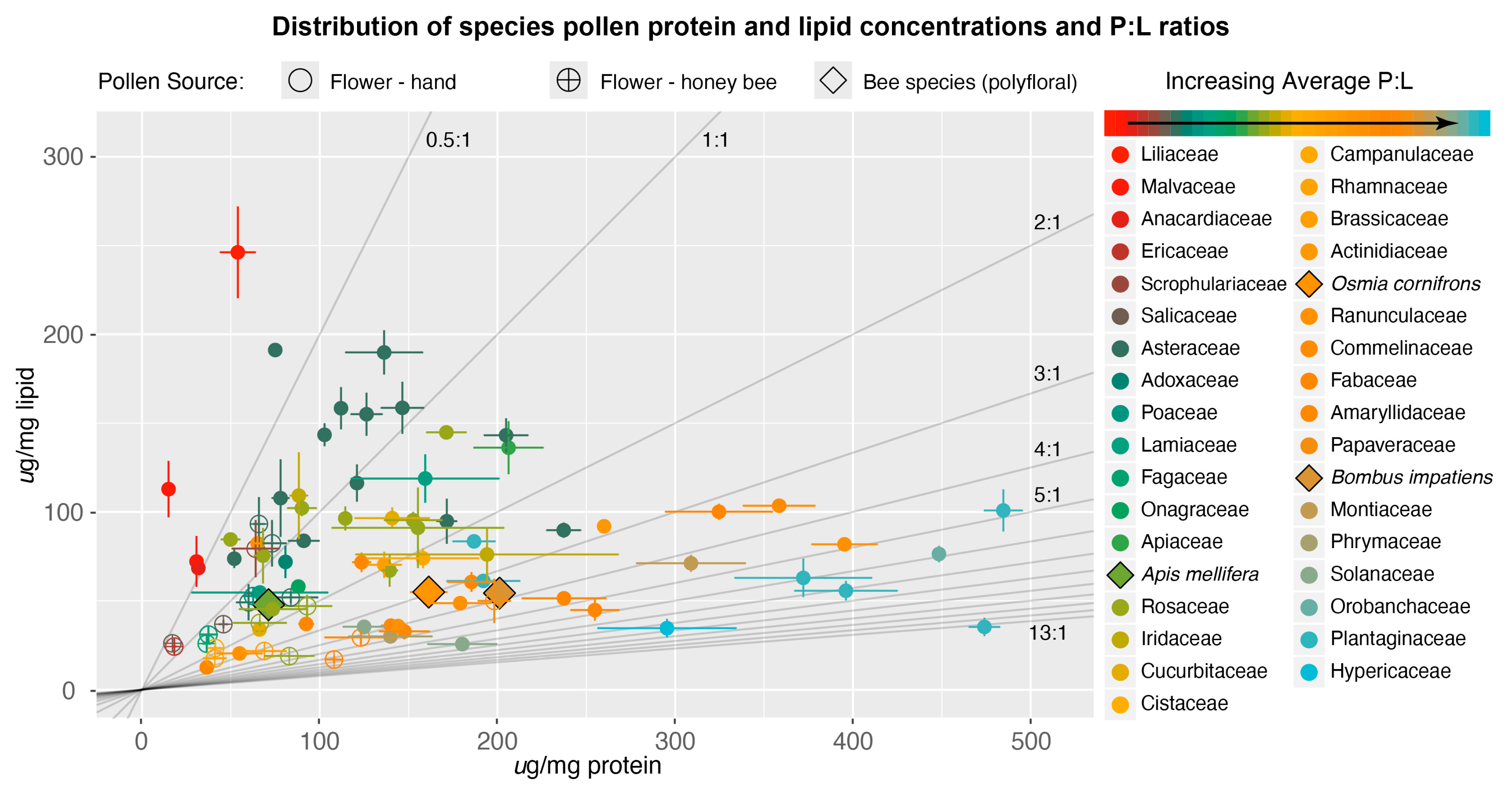