Self-Selection of Agricultural By-Products and Food Ingredients by Tenebrio molitor (Coleoptera: Tenebrionidae) and Impact on Food Utilization and Nutrient Intake

Increasing forest management practices by humans are threatening inherent insect biodiversity and thus important ecosystem services provided by them. One insect group which reacts sensitively to habitat changes are the rove beetles contributing to the maintenance of an undisturbed insect succession during decomposition by mainly hunting fly maggots. However, little is known about carrion-associated rove beetles due to poor taxonomic knowledge. In our study, we unveiled the human-induced and environmental drivers that modify rove beetle communities on vertebrate cadavers. At German forest sites selected by a gradient of management intensity, we contributed to the understanding of the rove beetle-mediated decomposition process. One main result is that an increasing human impact in forests changes rove beetle communities by promoting generalist and more open-habitat species coping with low structural heterogeneity, whereas species like Philonthus decorus get lost. Our results are not solely important for carrion ecological, but also for forensic entomological assessments on crime scenes, e.g., postmortem body relocation, because little information is available until now about rove beetles as one of the most important insect groups on bodies. 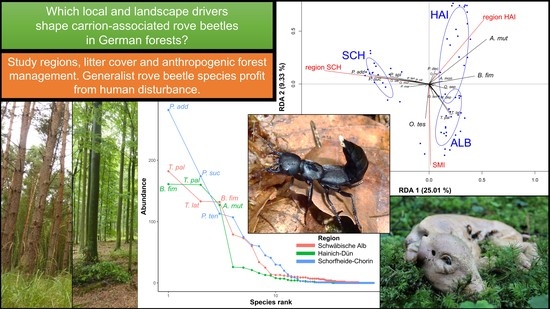