Mechanosensory organs in legs play are crucial receptors in the feedback control of walking and in the detection of substrate-borne vibrations. Stick insects serve as a model for the physiological role of chordotonal organs and campaniform sensilla. This study documents, by axonal tracing, the neural innervation of the complex chordotonal organs and groups of campaniform sensilla in the proximal tibia of the midleg in Sipyloidea sipylus. In total, 6 nerve branches innervate the different sensory structures, and the innervation pattern associates different sensilla types by their position. Sensilla on the anterior and posterior tibia are innervated from distinct nerve branches. In addition, the variation in innervation is studied for five anatomical branching points. The most common variation is the innervation of the subgenual organ sensilla by two nerve branches rather than a single one. The fusion of commonly separated nerve branches also occurred. However, a common innervation pattern can be demonstrated, which is found in >75% of preparations. The variation did not include crossings of nerves between the anterior and posterior side of the leg. The study corrects the innervation of the posterior subgenual organ reported previously. The sensory neuroanatomy and innervation pattern can guide further physiological studies of mechanoreceptor organs and allow evolutionary comparisons to related insect groups. View Full-Text
Keywords: neurobiology; mechanoreceptors; neuroanatomy Sipyloidea sipylus; physiology neurobiology; mechanoreceptors; neuroanatomy Sipyloidea sipylus; physiology
►▼ Show Figures 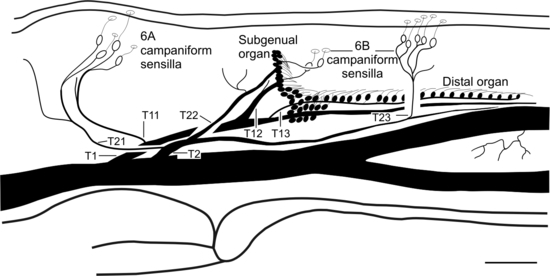 Strauß, J. Neuronal Innervation of the Subgenual Organ Complex and the Tibial Campaniform Sensilla in the Stick Insect Midleg. Insects 2020, 11, 40.


Strauß J. Neuronal Innervation of the Subgenual Organ Complex and the Tibial Campaniform Sensilla in the Stick Insect Midleg. Insects. 2020; 11(1):40.


Strauß, Johannes. 2020. "Neuronal Innervation of the Subgenual Organ Complex and the Tibial Campaniform Sensilla in the Stick Insect Midleg." Insects 11, no. 1: 40.