To face the environmental problems caused by chemical pesticides, more ecologically friendly alternative pest control strategies are needed. Entomopathogenic nematodes (EPN) have great potential to control soil-dwelling insects that cause critical damage to the roots of cultivated plants. EPN are normally suspended in water and then sprayed on plants or onto the soil, but the inconsistent efficiency of this application method has led to the development of new formulations. Among them is the use of alginate capsules or beads that encapsulate the EPN in favorable conditions for later application. In this study, we evaluated whether alginate beads containing EPN are able to kill larvae of the banded cumber beetle Diabrotica balteata LeConte and thereby protect maize plants from damage by these generalist rootworms. EPN formulated in beads were as effective as sprayed EPN at killing D. balteata. They were found to protect maize plants from D. balteata damage, but only if applied in time. The treatment failed when rootworm attack started a week before the EPN beads were applied. Hence, the well-timed application of EPN-containing alginate beads may be an effective way to control root herbivores. View Full-Text
Keywords: entomopathogenic nematodes; encapsulation; Diabrotica balteata LeConte; maize; plant protection; biocontrol entomopathogenic nematodes; encapsulation; Diabrotica balteata LeConte; maize; plant protection; biocontrol
►▼ Show Figures 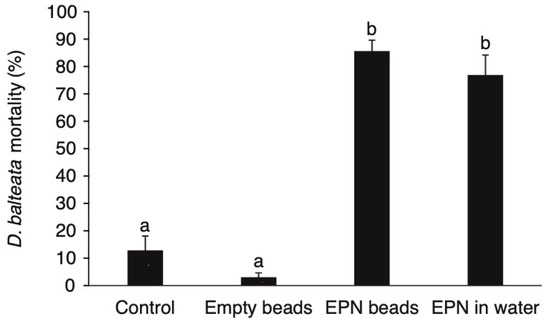