Effects of a Resident Yeast from the Honeybee Gut on Immunity, Microbiota, and Nosema Disease
Previous Article in Special Issue

A Survey of Tick-Borne Bacterial Pathogens in Florida

Within the past three decades, new bacterial etiological agents of tick-borne disease have been discovered in the southeastern U.S., and the number of reported tick-borne pathogen infections has increased. In Florida, few systematic studies have been conducted to determine the presence of tick-borne bacterial pathogens. This investigation examined the distribution and presence of tick-borne bacterial pathogens in Florida. Ticks were collected by flagging at 41 field sites, spanning the climatic regions of mainland Florida. DNA was extracted individually from 1608 ticks and screened for Anaplasma, Borrelia, Ehrlichia and Rickettsia using conventional PCR and primers that amplified multiple species for each genus. PCR positive samples were Sanger sequenced. Four species of ticks were collected: Amblyomma americanum, Amblyomma maculatum, Dermacentor variabilis, and Ixodes scapularis. Within these ticks, six bacterial species were identified: Borrelia burgdorferi, Borrelia lonestari, Ehrlichia ewingii, Rickettsia amblyommatis, Rickettsia andeanae, Rickettsia parkeri, and Rickettsia endosymbionts. Pathogenic Borrelia, Ehrlichia, and Rickettsia species were all detected in the North and North-Central Florida counties; however, we found only moderate concordance between the distribution of ticks infected with pathogenic bacteria and human cases of tick-borne diseases in Florida. Given the diversity and numerous bacterial species detected in ticks in Florida, further investigations should be conducted to identify regional hotspots of tick-borne pathogens. View Full-Text
Keywords: tick-borne disease; Florida; surveillance; Rickettsia; Borrelia; Ehrlichia; Amblyomma americanum tick-borne disease; Florida; surveillance; Rickettsia; Borrelia; Ehrlichia; Amblyomma americanum
►▼ Show Figures 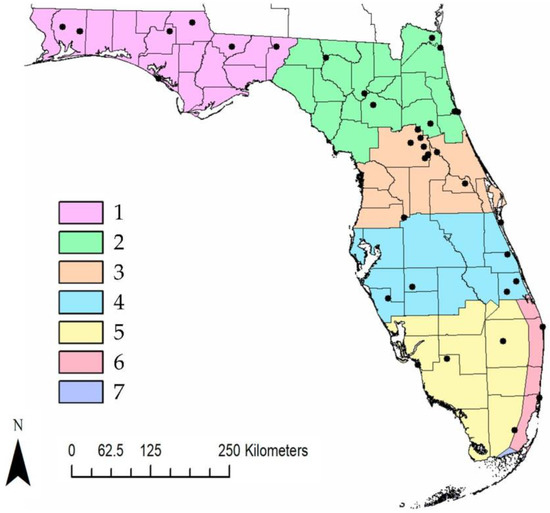