Sources of infestation are the key elements to be considered in the development of habitat management techniques for the control of maize stemborers. Several wild plants, grasses mostly, have been identified that serve as hosts for stemborers and their parasitoids during the off-season when maize is not present in the field. However, their abundance is much lower in wild plants compared to cultivated fields. Thus, the role of wild plants as a reservoir for cereal stemborers and their parasitoids is still controversial, particularly in agro-ecosystems with reduced wild habitat. We studied the occurrence of different maize stemborers and associated parasitoids in maize stem residues and wild grasses during non-cropping seasons as potential carry-over populations to subsequent early season maize plants. Surveys were conducted in the central region of Kenya during long and short dry seasons in maize residues and wild grasses as well as during the two rainy seasons in maize plants at earlier and late whorl stages during the years of 2017 and 2018. Wild habitat had a higher species diversity than maize residues habitat, but maize residues had a higher abundance of maize stemborer species, such as Busseola fusca, Sesamia calamistis, and Chilo partellus, and of associated parasitoid species (i.e., Cotesia flavipes and Cotesia sesamiae) than wild plants. Our surveys, complemented by field parasitoid releases of C. flavipes and C. sesamiae, indicated that maize residues constitute a better refugia reservoir not only of the maize stemborers but also of C. flavipes and C. sesamiae during non-cropping seasons as compared to wild plants and, thus, might constitute in this region the main source of both stemborers and C. flavipes/C. sesamiae carry-over in maize plants during the subsequent cropping season. Thus, systematic destruction of maize residues would not help the biological control of lepidopteran stemborers. This is particularly true in areas with reduced wild habitat. View Full-Text
Keywords: wild plants; maize residues; habitat and pest management; biological control wild plants; maize residues; habitat and pest management; biological control
►▼ Show Figures 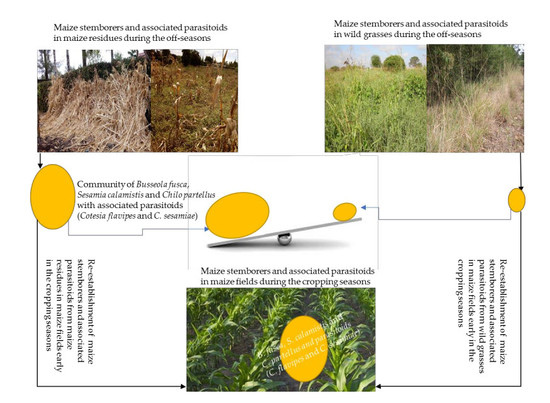